Elderberry Syrup is an herbal supplement that can help in preventing common cold and the flu, and also in reducing their symptoms. The company behind this product is Terra Firma Botanicals.

Terra Firma Botanicals is a small company founded in 1982 in Oregon. It is focused on manufacturing only organic products based on herbs, which do not contain preservatives. Moreover, the formulas are not tested on animals. They produce syrups, tinctures, floral oils and other such supplements for a variety of conditions, like blood, skin and liver conditions, or bladder and yeast. Moreover, they have also developed brain supplements (anti-depression tinctures, mood enhancers, anti-stress and general tonic supplements). They also have a line of herbal remedies for the prevention or treatment of coughs and colds.

According to the manufacturer, Elderberry Syrup is recommended for coughs, fever, and other cold and flu symptoms. Children react very well to this product as it also has a pleasant taste. It contains only naturally derived and organic ingredients. Elderberry is a plant rich in vitamins A and C, which are both useful against colds. The plant also has other uses in folk medicine (for instance, in eye infections).

Elderberry Syrup is an herbal supplement which can be administered to individuals suffering from sore throat, cough, fever and other flu or common cold symptoms. According to the manufacturer, it works great for children. Its main ingredient is elderberry extract. The elderberry plant has many uses, both medicinal and culinary. For instance, its flowers are used to prepare a traditional drink in some Balkan countries, but they can also be used in infusions. Moreover, you can make soups, jelly, jams or sauce out of elderberry, and alcoholic drinks like wine and brandy.

Regarding medicinal uses, elderberry may possess anti-viral, anti-cancer, and anti-inflammatory properties according to test tube experiments. Therefore, it may be used as a syrup or tea in treating coughs, fever, inflammations of the respiratory tract or acne related infections. There are several studies done on humans as well, which have concluded that some drugs containing elderberry have been efficient in shortening illness duration or reducing its effects. However, it was not clear what the effect of the plant really was, as those drugs also had of other ingredients besides elderberry. Moreover, another study proved the efficacy of the plant in treating influenza however the researcher recommended the study to be repeated on more people.

Some specialists advise consulting a doctor before taking elderberry if you are also taking drugs against asthma or diabetes, diuretics, chemotherapy medication, laxatives or drugs that suppress the immune system. Other researchers suggest that pregnant and nursing women should not use it because of insufficient clinical research.

The efficacy of Elderberry Syrup (based on elderberry, honey and 5% grain alcohol) has not been researched by scientists.

3) What Does Elderberry Syrup Do?

Elderberry Syrup is an herbal supplement recommended in the treatment of the common cold and influenza. Its main ingredient is elderberry also known as Elder or Black Elder. It also contains 5% organic alcohol from grains by volume.

It is rich in vitamin A can be used in respiratory, and skin diseases, eye disorders and it also increases immunity. It also contains vitamin C which scientists have shown that it can help shorten the duration of the common cold and also plays an important role in the functioning of the immune system. Elderberry has many traditional uses, although many of the claims have not been tested on humans by scientists as well. Thus, it is used to reduce fever and muscle pain, to reduce fever and sore throat symptoms in influenza as well as the common cold (as it helps boost the immune system and reduces inflammation of respiratory passages). Some people have been using it for skin irritations, conjunctivitis and acne infections. It also constitutes a remedy against constipation as per anecdotal references. It might also help reduce cholesterol and possess anti-ageing properties, as per some test tube experiments. The plant does not have known side effects when consumed properly (it should not be consumed fresh because it contains toxic chemicals).

It is possible for elderberry to interact with some medications. Therefore it would be safer to ask for the doctor’s advice before use. For instance, it may interfere with drugs that you take when you have autoimmune diseases, diabetes, and asthma or with laxatives.
The formula developed by Terra Firma Botanicals, consisting mainly of elderberry and honey, has not been backed up by scientific research. Honey is however also known for its anti-bacterial properties.

The manufacturer recommends taking the syrup either alone or in tea. It is also best to use when cold or flu symptoms start showing. It does not recommend a dose, however.

There are a very limited number of online customer reviews. In our view, they should be regarded with caution as they might be a marketing tool. Available testimonials include the following:

5) What You Need to Know Before Taking Elderberry Syrup

6) How Much Does Elderberry Syrup Cost?

The price per ounce of Elderberry Syrup from Terra Firma Botanicals recommends it as an affordable product. The formula can be bought in bottles of 2 ounces and 4 ounces respectively. The formula can be ordered online directly from the manufacturer or some distributors’ online stores. However, it is not as widely available as some competitors’ similar products. You can also find some retail locations on the producer’s website.

The manufacturer’s policy is to accept returns of products that have not been opened in maximum 30 days after the order. The restocking fee is 20%, and the customer also pays shipping charges. However, orders of custom-made remedies cannot be returned.

It is recommended taking Elderberry Syrup at the start of the symptoms of cold or flu. The product comes in bottles of 2 or 4 ounces. A certain dose and frequency, for instance based on the child’s age, are however not recommended. There are not any adverse effects mentioned.

Elderberry Syrup is an herbal supplement which should be used against coughs, fever, sore throat and other symptoms of common cold and influenza. As positives, we would mention that it has a good price, it contains natural ingredients, and that elderberry has been used in folk medicine for a long time. On the downside, it does not have many online consumer reviews and it is not available in so many online stores like similar syrups sold by other manufacturers on the market. We recommend consulting a pediatrician before administering the formula to children especially if they also take other medications with which Elderberry Syrup could interfere. 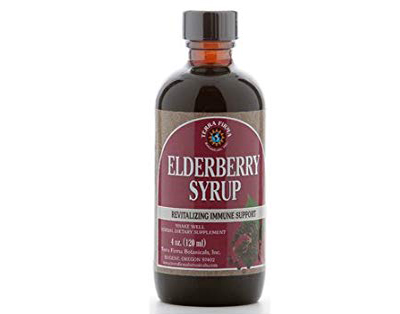 clear
Q:
What are the active ingrediens in Elderberry Syrup?
A:

Q:
Elderberry Syrup is all about what?
A:

Elderberry Syrup is an herbal supplement produced by Terra Firma Botanicals, a fairly small US manufacturer of organic supplements. It aims to reduce symptoms associated with common cold and fever. It works well for children but it could also be used by adults. The elderberry plant has been traditionally used for generations against fever, sore throat and coughs. The manufacturer does not mention any potential side effects in relation to Elderberry Syrup.

Elderberry Syrup is recommended for the treatment of colds and against the flu, and it is recommended mostly for children. We have found a very limited number of consumer testimonials; therefore, we advise caution as they might be a marketing tool. The product is not widely available online either. However, it is an affordable formula, made entirely of organic ingredients, and research on elderberry has shown it is effective in dealing with cold and flu symptoms. All in all, we believe that the product may work however caution is warranted since Elderberry Syrup by Terra Firma Botanicals does not have an established reputation on the market yet.

I gave Elderberry Syrup to my 9 yr old as he was having a sore throat and he started feeling better after one day. I gave him four teaspoons. He also likes the taste very much!

I am living proof that miraculous product works extremely well.I felt so bad, one day coming home fr work that I stepped into a drugstore to ask a pharmacist for help. He directed me to GAIA Elderberry Formula, and promised that in 3-days I would overcome my flu-like symptoms. He was right, as the discomfort left my chest and throat, and allow me to simply begin blowing my nose as a way to e.pty my body of dark green mucus. The experience was awesome, and I was healed of whatever it was that had viciously attacked my body. There should be a way to advertise this herbal remedy, because every person on the planet would use it. After, I purchased the actual tiny berries in a freeze-dried state to use as a tea. What a wondetful naturally sweet treat to replace sida pop and sugary juices. I highly recommend this beneficial product.