Super Ginkgo Biloba Plus is an herbal supplement designed to enhance memory and concentration and improve overall cognitive health and function. The formula is manufactured by Action Labs.

The company has been on the market for more than 10 years, supplying nutritional supplements designed to enhance and support a healthy and active lifestyle.

1) What is Super Ginkgo Biloba Plus?

Super Ginkgo Biloba Plus is an herbal combination of 6 plants. According to the manufacturer, it uses a standardized extract of Ginkgo Biloba, which is guaranteed to contain 24% Ginkgo Flavone glycosides and 6% Terpenes.

This standardization level has been used in a large number of published clinical studies conducted with Ginkgo Biloba and is proven safe and effective.

There is evidence that these two constituents, the Flavone glycosides, and the Terpenes, are responsible for most of Ginkgo’s health benefits.

The exact mechanism of action for each ingredient is not fully understood. Apparently, the Flavoneglycosides are primarily responsible for Ginkgo’s antioxidant activity. At the same time, the Terpenes may enhance circulation to the brain and other parts of the body.

The main benefits of Ginkgo Biloba, which derive from these properties, include improved working memory, concentration, and mental faculties in healthy individuals and helping treat memory problems and conditions associated with cognitive function decline (such as Alzheimer’s). Ginkgo is generally safe but has been reported to cause stomach upset, nausea, dizziness, diarrhea, or headache.

Gotu Kola, one of the most essential herbs in Ayurvedic medicine, is a powerful adaptogenic plant, meaning it helps the body’s natural ability to cope with stress.

Gotu Kola is often used to enhance longevity and mental clarity because of its antioxidant and tonic properties. However, many of its claimed uses are not supported by scientific evidence.

There is concern that it might cause liver damage, stomach upset, nausea, and drowsiness; however, there have not been many reports of these side effects.

3) Does Super Ginkgo Biloba Plus Work?

Super Ginkgo Biloba Plus represents an herbal mixture of six plants. It utilizes a standardized Ginkgo Biloba extract, which, according to the producers, is guaranteed as containing 24% Flavone glycosides and 6% Terpenes.

This standardization level can be observed in many clinical studies conducted on this ingredient and has proven as safe and effective. There is some evidence that the two constituents are, in fact, responsible for the majority of the benefits provided by this herb.

The precise action mechanism for each component hasn’t been fully understood yet.

However, the Flavoneglycosides are actually primarily responsible for Ginkgo’s antioxidant properties. At the same time, the Terpenes possess the capacity to enhance brain circulation and some other bodily parts.

This plant’s core qualities include enhancing the working memory, concentration, and other mental faculties when it comes to healthy individuals while also helping treat memory issues or conditions often associated with cognitive functions decline like Alzheimer’s disease.

While it is usually viewed a safe, there have been some reported cases of stomach upset, nausea, headaches, diarrhea, or dizziness.

Gotu Kola, an essential herb for Ayurvedic medicine, represents an adaptogenic plant, which means that it helps the organism’s natural ability to cope with stressful events.

Due to its tonic and antioxidant qualities, it is generally utilized to improve longevity and mental clarity. Unfortunately, most of its claimed usages haven’t been scientifically proven; thus, they’re only sustained by testimonials from customers who have used products based on it.

There are online customer reviews about this supplement. What is being reported includes the following:

Found either on the official manufacturer webpage or other offline or online providers, this supplement is most of the time considered to be a moderate-priced supplement. However, some states that its price is higher than other alternative remedies.

There are usually discounts and promotions for regular customers that are provided to facilitate their purchase and determine to appeal to this brand. It is provided in the form of capsules that are 100 per bottle and can be taken within one month.

They should be kept in cold and dry places to maintain them good for utilization.

The manufacturer recommends taking 2 capsules once or twice daily. No side effects or special precautions are mentioned. Also, there are no consumer reviews available online to support the formula’s effectiveness.

Super Ginkgo Biloba Plus is advertised to help with memory, concentration, and cognitive function and health by supplying consumers with a mixture of 6 potent herbal ingredients.

Research exists on all of them, particularly on Ginkgo Biloba and Gotu Kola. They enjoy great popularity among memory and brain performance, enhancing formulations.

The Super Ginkgo Biloba Plus has not been reviewed by consumers, which is strange because the manufacturer is a rather important company and these types of products usually get consumer reviews.

Anyway, you should know that side effects and drug interactions have been confirmed by research or consumer experience. You must consult a physician before you start using any dietary supplement. 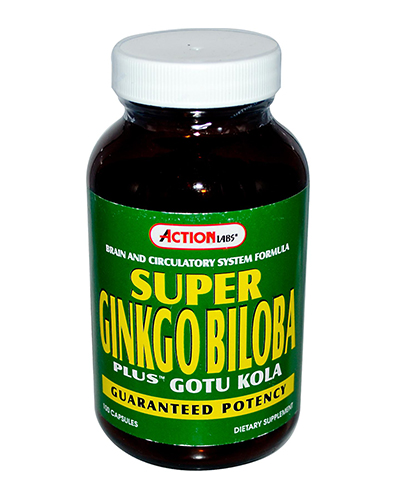 clear
Q:
What are the core ingredients in Super Ginkgo Biloba Plus?
A:

Q:
What is Super Ginkgo Biloba Plus?
A:

Super Ginkgo Biloba Plus is promoted as an herbal remedy that focuses on increasing the quality of specific cognitive functions like concentration, memory, or focus.

Its manufacturer is called Action Labs and has been a member of the nutritional field for more than ten years. This formula includes popular ingredients like the one mentioned in its name or Gotu Kola.

Even though its producers have no explicit restrictions, it is advised to consult personal healthcare before usage, particularly if you suffer from allergies.

Q:
Can Super Ginkgo Biloba Plus improve cognitive health?
A:

Super Ginkgo Biloba Plus was created to offer help with concentration, memory, and other cognitive functions or just general health by supplying clients with a combination of six potent herbal extracts.

Studies have been conducted, specifically on Ginkgo Biloba and Gotu Kola, which enjoy increased popularity among formulations meant to enhance brain performances or memory functions.

Although most of the results proved satisfying, this specific mixture hasn't been verified scientifically, thus further research is required.

Although few, some harmful side effects may appear if the label dosages aren't followed accordingly.

According to the Center for Science in the Public Interest’s webpage:
Companies add small amounts of Ginkgo biloba to beverages because it supposedly boosts memory and thinking, but most studies in healthy people show little or no benefit at levels greater than what’s added to foods and beverages. Since Ginkgo appears to interfere with blood clotting, it should not be consumed before or after surgery, during labor and delivery, or by those with bleeding problems such as hemophilia. IMPORTANTLY, in 2013, the U.S. Government’s National Toxicology Program published the first study that could evaluate Ginkgo’s ability to cause cancer. The study found “clear evidence” that Ginkgo biloba caused liver cancer in male and female mice and “some evidence” that Ginkgo caused thyroid cancer in rats.
Link to U.S. Gov Toxicology Program Report-> http://ntp.niehs.nih.gov/ntp/htdocs/lt_rpts/tr578_508.pdf
Link to CSPI page-> http://www.cspinet.org/reports/chemcuisine.htm#GINKGO

Title for your comment
There are warnings out too!
Have you tried this product?
No
Reply
Nathaniel T. Williams

I can remember where I put my papers and when I have my doctor appointments since I\’ve started taking it. It\’s definitely a good supplement.