Elevate is a nutritional supplement advertised to assist with rapid and safe weight loss, increase energy, and enhance mood and mental awareness. The company behind this formula is TGL Nutrition, a relatively newly-founded company (2010) specialized in manufacturing dietary supplements aimed to help people in losing weight and detoxifying their bodies.

Elevate features a total of eight key ingredients that have been researched for their beneficial properties on people dealing with overweight issues. These substances are briefly described by the manufacturer on the official page of the product. The formula includes natural caffeine (more than 200 mg per capsule), an extract of the Hoodia Gordonii cactus plant, Green tea extract, a chocolate extract with diuretic properties called Theobromine and Maca Extract both with stimulant properties, Magnolia Bark extract that may increase fat burning, and Guggulsterone, advertised as one of the most effective fibers available.

For maximum benefits, Elevate is recommended in association with a healthy diet and moderate exercise. This product is addressed to adults who want to lose weight in a natural and safe way. Unfortunately, there is no evidence that this specific combination of active ingredients found in this formula is safe or effective, as there are no studies involving the formulation.

Elevate is an herbal-based dietary supplement.
One of its active substances is Green tea, a very well-researched natural substance believed to bring numerous health benefits in humans. The plant is originated in China and has been used for medical purposes for thousands of years, including in matters such as reducing blood pressure, preventing cancer, heart disease, or diabetes, reducing cholesterol, depression, and promoting a healthy weight. The benefits of this plant are, however, still a matter of debate despite its many supporters claiming that it is a very potent natural support against many common diseases affecting modern man. As a tea, it is believed that the necessary dose is several cups per day (up to ten) in order to enjoy the numerous benefits of this plant, so a green tea supplement would be the recommended solution for those who seek a natural remedy against a certain condition. Green tea also contains caffeine, and it is not advised for people who are caffeine sensitive.

Magnolia bark is another ingredient found in this supplement, also used as a medicine for various health claims. The plant extract is recommended against skin problems, indigestion, sleeping problems, headache, stress symptoms and depression, menopausal symptoms, asthma and weight loss. The active compounds from this plant are also believed to be very powerful antioxidants that promote a healthy response of the body to stress and regulate Cortisol levels. Cortisol, also known as the stress hormone is secreted in high amount when the body is under a lot of pressure, to counteract the negative effects and restore the balance of the body. Prolonged stressful periods result in excess Cortisol production, which further causes more negative effects including excess fat in the abdominal area, fatigue, sugar control problems, etc. Magnolia bark is believed to be effective in weight management programs due to its abilities to control cortisol production. However, clinical research is considered insufficient and the side effects for long term use are unknown. The use of Magnolia bark supplements during pregnancy and breastfeeding is considered unsafe.

3) Is Elevate Right for You?

One of the active ingredients of this formula is caffeine. This plant extract is used in various supplements for its believed benefits on the memory and alertness, energy levels and stamina, eyes, liver and even against certain types of cancers such as skin cancer. The weight loss benefits of this substance have also been highly promoted, but current research did not show a permanent effect or a significant weight loss in those who have used such supplements. Those who claim benefits of caffeine in supporting weight loss argue that the active compounds from caffeine act both in suppressing appetite and cravings and on the increased calorie burning rates. It has been observed that caffeine stimulates thermogenesis, a process by which food is transformed into energy. Studies involving animals also revealed a direct link between caffeine and reduced accumulation of fat in cells, but this connection is much weaker when artificial caffeine is used instead of the natural extract. The use of caffeine has been associated with symptoms like nervousness, insomnia, stomach pain, increased heart rate, vomiting, anxiety, or chest pain, particularly when consumed in excess. The recommended dosage may vary depending on the symptoms needed to be treated.

Hoodia Gordonii Cactus Powder is an extract of a South African plant discovered in the 18th century. Initially, the plant was used to treat indigestion and other infections, but today the extract is a popular ingredient in weight loss supplements. It is believed to be a very potent compound that is particularly helpful due to its ability to reduce appetite and cravings. However, the species is threatened with extinction, and there are not few those who claim that many of the commercialized supplements don’t contain the genuine extract but cactus-like herbs or commercially grown Hoodia with similar benefits. Hoodia-based supplements are often recommended to treat obesity and reduce excess fat in people who suffer from overweight problems. The side effects associated with the use of Hoodia supplements are dry mouth, low energy, and on the long-term liver damage.
Elevate reviews are reduced in number, so this is not a reliable source for determining the formula’s Effectiveness. The suggested dose is 1-2 capsules per day with a glass (8 oz.) of water.

6) How Much Does Elevate Cost?

Elevate is packed in bottles of 90 capsules which is the necessary dose for a month and a half (when used in the maximum dosage). At the moment of this review, the formula comes with a substantial discount which makes the monthly price very affordable. The product also seems to benefit from free shipping. The formula is available internationally. Shipping charges vary depending on the shipping method, the size of the order, and the country of delivery.
The manufacturer does not disclose their return policy. Clients who want to find all the information about this system may call a toll- free number or send an e-mail to an address available on the official site.

Elevate is offered as an effective diet pill suitable for those following Reflect and HCG diets. The manufacturer offers a moderate amount of information regarding their formulation, but does not mention anything about potential unwanted side effects or any precautions to be considered.
Although the formula is advertised as scientifically formulated, there is no evidence of a scientific trial that involves this product. The ingredients are indeed researched substances, but the evidence is not considered conclusive or unanimously approved.

Also, there is no evidence that the combination of ingredients and dosages is effective or that there are no unwanted interactions between the individual substances. More so, the manufacturer is relatively new on the market and has not established a reputation yet. The available testimonials about Elevate formula are not numerous and seem to be contradictory, as this is not an approved product. It is always best to consult a healthcare professional before starting to use it. 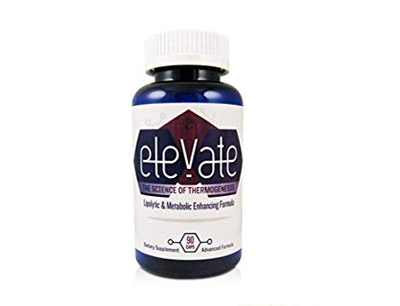 clear
Q:
What are the Elevate ingredients?
A:

Elevate is an over the counter product advertised as a safe and fast acting fat burner. The formula is produced and marketed by TGL Nutrition, a recently founded American company. The benefits of this supplement include sustained energy levels, improved mood and alertness, continuous fat burn (throughout the day) and reduced appetite and craving pangs. The formula is advertised to work through a blend of 8 ingredients including caffeine (for increased energy), Hoodia cactus extract (to reduce appetite), Chromium Picolinate and Banaba extract (to regulate blood sugar levels and reduce food cravings), Green tea extract (to increase calorie burning), and several other nutrients. The suggested dose is 1-2 capsules daily with water. Elevate reviews are irrelevant in number and consistency. The formula is also not clinically researched, so the claimed benefits are not scientifically supported.

Q:
Are Elevate benefits actually a reality?
A:

Elevate is a nutritional formula advertised as a highly effective product in reducing weight without actually triggering any unwanted side effects. It is claimed as a scientifically formulated product that provides multiple benefits for its users, including on the mood. However, there is no indication of a specific clinical trial that involves this formulation. Moreover, the producer does not indicate any of the potential side effects and drug interactions, which does not mean that they do not exist altogether. The active ingredients were scientifically researched and showed to cause some unwanted reactions (particularly when used improperly or in large doses).

The formula does not benefit from the support of consumers either. A reduced number of mixed testimonials is available for online consultation. In conclusion, it is advisable that before you decide to take this supplement, you go ahead and consult a specialized healthcare practitioner or nutritionist who can fully inform you about the formula's effects.

Elevate is a great weight loss support. I feel full of energy, I can exercise longer, I am more mentally alert at work and I managed to lose several pounds since starting to use the product. I am already at my second bottle and I have nothing to complain about. Very good and inexpensive formula!

I bought this supplement a few weeks ago because a friend recommended it. I am very pleased with the effects so far. I managed to lose a couple of pounds and I feel full of energy, which is one of the best qualities of the product. So far no side effect, so I will continue to use it until I finish the first bottle and if it all goes well I will buy it again.