Curcumin has been advertised as a dietary supplement that is meant to sustain a healthy cellular function, promote a healthy immune system, and also offers stress relief.

The manufacturer of this product is called Jogsaw Health and is presented as a business that has been founded by a father and son in Arizona, United States in 2005. They aim to manufacture high potency and quality dietary supplements that are backed up by full money back guarantees available with each of them. During the blending process, several techniques are used in order to make the unique and some of the formulas are made using a Sustained Release Technology that permits the active ingredients to have a longer than average release time, thus providing the body with constant amounts that are properly assimilated.

Curcumin has been created using no preservatives or pesticides and is said to provide special help by supporting a balanced inflammation response. Because of its capsule form, gelatin that comes from animal sources was used and thus this product is not vegetarian friendly. A powerful antioxidant effect that sustains the immune function in the body and also promotes good inflammation cycles is also obtained with the consumption of Curcumin.

Curcumin is a herbal dietary supplement that is based on the therapeutic effects of a spice that comes from a plant source.

The active principle found in this product is called Curcumin, which is a spice that can also be found as turmeric and is made form a root of a plant and can be also used as medicine because of its therapeutic qualities. This plant has a taste that is warm and bitter, being used as to flavor and color cheeses, mustard, butters, or curry powders. Although this ingredient is mostly used as a spice, it presents with a wide range of therapeutic effects that deal with conditions such as arthritis, diarrhea, heartburn, stomach pain, and also liver or gallbladder problems. People have also reported turmeric as being effective with colds, headaches, bronchitis, cancer, leprosy, or lung infections; some evidence that indicates it to be useful for the nervous system has also been found and is said to be effective with Alzheimer’s disease as well. When dealing with leech bites, infected wound, or inflammatory skin conditions, this ingredient can be applied directly to the skin in order to generate positive effects.

3) Does Curcumin Work and it is Safe?

Curcumin is a herbal based dietary supplement that uses the healing properties of a plant that is best known as a spice in curry.

The active ingredient of this blend is Curcumin that is also known as Turmeric and is a plant form which the root is widely used as medicine. This plant is said to have a warm, bitter taste and is constantly used in order to flavor or color curry powders, cheeses, mustards, or butters. This ingredient is most commonly used for its therapeutic effect that deal with conditions such heartburn, arthritis, diarrhea, stomach pain, loss of appetite, liver problems, and gallbladder problems.

Some people also find this plant useful with conditions like bronchitis, colds, headaches, lung infection, leprosy, or cancer; there is some evidence that indicates it to also be effective with Alzheimer’s disease or kidney problems. Turmeric can also be applied directly on the skin in order to help with problems like inflammatory skin conditions, leech bites, ringworm, or infected wounds. In addition, recent research seems to turn attention to Curcumin cancer benefits, in the sense that consumption may inhibit cancerous cells proliferation. The consumption of this plant is generally considered to be safe, although some mild Curcumin side effects have been reported, side effects such as diarrhea, nausea, upset stomach, or dizziness.

There are online testimonials about this supplement. What is being said includes the following:

5) What You Need to Know Before Taking Curcumin

This product comes with a slightly high, but still affordable price and presents itself in the form of a bottle that holds 60 capsules. The manufacturer states the daily dosage as being of one or two soft-gels or as directed by a healthcare practitioner. One container of formula is said to provide a two-month supply at the dosage of one capsule per day. There are no free trials associated with this product, but the manufacturer offers a full money back guarantee that is available for 90 days. There are other possible advantages if the product is purchased from the manufacturer’s web site, such as free shipping in the United States if the order is over 89 or several price discounts if several bottles are purchased at once.

Several Curcumin side effects have been associated with the use of this ingredient, some of them are: nausea, diarrhea, dizziness, or an upset stomach.

Curcumin is a natural but not vegetarian friendly health supplement that is based on the therapeutic qualities of plant that is usually used as a spice. The desired health benefits regard the immune system and this formula provides an antioxidant effect that also promotes healthy inflammation cycles. Some of the health problems it helps with are: colds, bronchitis, lung infection, or even Alzheimer’s disease. One container holds60 softgel capsules and has the recommended dosage of one or two capsules per day with a meal, each bottle also comes with a full money-back guarantee that is active for 90 days. 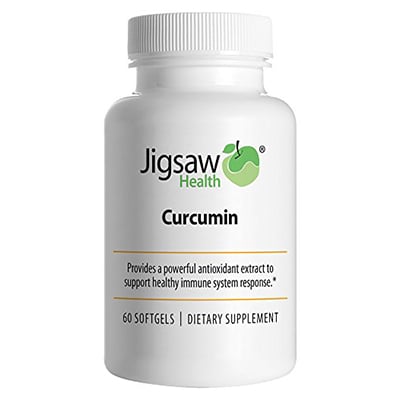 clear
Q:
What are the core ingredients in Curcumin?
A:

Q:
What is Curcumin supplement?
A:

Curcumin is a stress reliever in the form of a dietary supplement that also promotes a good immune health. Other listed Curcumin benefits include better memory and focus, increased mental clarity and a more positive response to stress. The manufacturer is a United States business located in Arizona and is called Jigsaw Health. This product is based on the healing capacities of a plant that is mostly used as a spice and is called Turmeric, an ingredient that has been reported as effective with lung infection, colds, or bronchitis, but also present benefits that regard the nervous system.

Curcumin cancer benefits have also been researched lately, with continuous studies being conducted. Curcumin side effects are limited, especially if the extract is used with moderation.

Curcumin seems to be a health product that provides a powerful antioxidant effect and aims to sustain health by supporting the immune system and the nervous system, but also provides a series of general health benefits as well. The manufacturer has great confidence in this product and backs it up with a full 90 day money back guarantee. The active ingredient is a plant that is a well known spice, but has been proven to have consistent therapeutic effects and is blended in a soft-gel capsule form that is not suitable for vegetarian use. This product also comes with a series of advantages if bought from the manufacturer's web site.

I have been searching for a potent antioxidant for a long long time, but no more. This product is the most effective one I ever used.