Ashwagandha 1:1 is advertised to produce a tonic and adaptogenic effect for the entire body. The manufacturing company Standard Process mentions several specific benefits, which include encouraging a healthy response to environmental stress and an overall feeling of well-being, enhancing the immune system, promoting normal blood production and supporting the body during aging processes. Additionally, the formula is claimed to promote healthy growth and development in children.

Standard Process manufactures and sells more than 300 products worldwide, which include dietary supplements, veterinary products and herbal solutions. The company has more than 80 years of market experience.

Ashwagandha 1:1 is designed for the use of both adults and children. Pregnant and lactating women are advised not to use the formula unless specifically recommended by a physician.

Additional research indicates that the herb can boost the immune system and strengthen the body’s overall resistance to diseases. Ashwagandha is considered safe when used for short periods of time. Side effects can however exist and include vomiting, stomach upset, and diarrhea. The long term safety is not known. Safety concerns target pregnant and nursing women and people suffering from an autoimmune disease.

You can also take ashwagandha in a much higher serving size in NutriRise Ashwagandha.

By featuring a mixture of two ancient Indian herbs, Ashwagandha and Withania Somnifera, Ashwagandha 1:1 is advertised as possessing remarkable stress and anxiety relief qualities. From a medicinal point of view, these plants are used mostly for their antioxidant properties. For example, Ashwagandha has an effect on the neuroprotective system, thus helping the brain protect against free radical damage that usually leads to cognitive impairment. Some clinical studies suggest it specifically helps when it comes to alleviating symptoms of anxiety disorder as well as panic attacks. The fight against radical damage is directly linked to cognitive impairment prevention. Therefore Ashwagandha is an alternative treatment for Parkinson’s disease and Alzheimer’s disease.

Additional studies indicate that this herbal extract can also strengthen the body’s resistance to diseases because it boosts its immune system. Although considered safe for short-term usage, Ashwagandha may determine certain unwanted side-effects that include: stomach upset, vomiting and diarrhea. According to the manufacturers, there are also some safety concerns that directly target nursing and pregnant women, as well as people that suffer from auto-immune diseases. For example, a person with Lupus should avoid following this treatment because it may even worsen its symptoms, thus creating a contra effect for its immune system.

There are online testimonials about Ashwagandha 1:1. What is being reported includes the following:

5) Precautions of Ashwagandha 1:1 Use

Ashwagandha 1:1 can be ordered both from official manufacturer website and other online retailers Even though its price varies from retailer to retailer, overall it is viewed as affordable. It is found in the form of capsules stored in bottles that usually contain 30 or 60 and can be even bought on packs that come with additional discounts. Unfortunately, international shipment has not been made available directly on the manufacturer’s website, but people from outside the United States may try to find the product with other local retailers. Potential customers may only base their future purchase on other testimonials since there is no available free sample.

The manufacturer recommends taking 5 ml (approximately 1 metric teaspoon) diluted in water or juice once per day. Several precautions are mentioned by the manufacturer. Reviews are scarce; however most report the formula is effective.

Ashwagandha is one of the most popular Ayurvedic herbal ingredients today. It is used in formulas either alone or in combination with other nutrients, usually to promote mental and physical balance. Ashwagandha 1:1 features an extract of this plant and is claimed to benefit the nervous system, the circulatory system and the immune function. Although there are not many consumer testimonials to support these benefit claims, the manufacturer enjoys an excellent reputation which may represent an argument towards the formula’s high quality and potential effectiveness. Because there are certain safety concerns concerning Ashwagandha use, we recommend you talk to a healthcare provider prior to use. 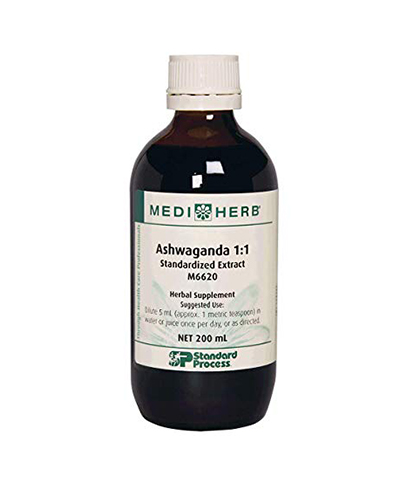 Customers Questions and Answers with Ashwagandha 1:1

clear
Q:
What does Ashwagandha 1:1 contain?
A:

The core ingredient of Ashwagandha 1:1 is Ashwagandha, one of the most popular Ayurvedic herbal extracts found on the current nutritional market. It has been used in formulas either alone or combination with other ingredients. These formulas usually promote physical and mental balance.

Featuring an extract of plants that are claimed to benefit the nervous system, Ashwagandha 1:1 possesses an excellent reputation, shown in the customer testimonials. Due to the safety concerns mentioned by the manufacturers, we recommend a talk with the personal healthcare provider before beginning this treatment. Nursing and pregnant women shouldn't take this supplement.