Kola Nut Review – Is it Effective?

Kola Nut features an extract of the plant called Cola Acuminata, or as it is popularly known Kola Nut. The formula manufactured by Nature’s Answer is advertised to promote energy. No other details about the potential benefits of the formula are disclosed. The formula is based on an organic alcohol extract, which is holistically balanced. This means that the manufacturer guarantees that the extract contains active constituents in the same ratios as in the plants used to produce the formulation.

Nature’s Answer is a company with roughly 40 years of experience in the liquid herbal supplements market. The company has won numerous awards for its products, such as the 2012 Best of Natural Beauty Award and the Best of Supplements Award won also in 2010.

According to the manufacturer, Kola Nut is a potent, easily absorbable formula designed to be used by adults, except pregnant and nursing women.

Kola Nut is based on a liquid extract of Kola Nut. The formula is Kosher certified. Kola nuts are the caffeine-rich seeds of the Cola tree, native to Africa.Cola Acuminata as Kola Nut is called have is primarily used today as an ingredient in dietary supplements that target weight loss and energy boost. The plant however enjoys numerous other benefits, although scientific research s still in its incipient phase. Several uses have been documented, which include digestion aid, pain reliever, lower blood pressure, relief of fatigue (especially beneficial in treating Chronic Fatigue Syndrome), treatment of depression symptoms, heart stimulant and boosting memory, mental alertness and mental focus.

Side effects include nervousness, insomnia, shaking hands or stomach upset, especially if taken in large amounts.Consumer reviews available in a fairly limited number report the formula is extremely effective in lifting energy levels without the specific caffeine-crash or any other common side effects.

2) What Are Kola Nut Ingredients?

Kola Nut is also part of the brain health formula by Brain Pep.

5) How Much Does Kola Nut Cost?

A month’s supply of Nature’s Answer Kola Nut costs roughly $13. You can also buy the formula discounted, as numerous retailers offer price promotions. The formula comes in bottles of one ounce which comprises 30 servings. However, you should keep in mind that consumption should not exceed ten days without a prior consult from a healthcare practitioner. The formula’s price is similar to that of other Kola Nut extracts. The formula may be purchased from the manufacturer, and other retailers (online, pharmacies, local hypermarkets, etc.are). The complete list of local suppliers can be listed using the Store Locator feature on the official manufacturer’s website.

Herbal remedies come in many forms and varieties today, with a huge supply being available in most countries. An estimation of $5.3 billion dollars has been made regarding sales revenue from natural medicinal formulations at the level of 2011 in the United States. The market is continuously expanding in both volume and value as demand for such “natural” products has been on an upward slope over the past decades. The Kola tree seeds enjoy moderate popularity as an energy boosting ingredient, due to their high caffeine content. Kola Nut has generally received positive reviews, however there are certain side effects associated to Kola Nut use. This is why the formula is recommended to be used for a period that does not exceed 10 days. 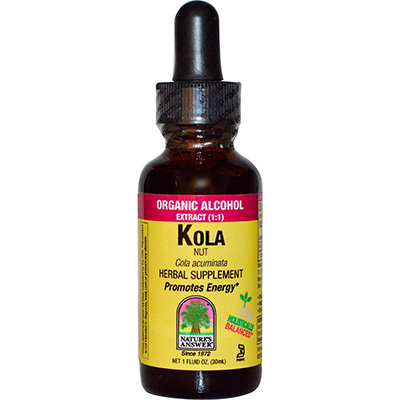 Q:
What is Kola Nut supplement?
A:

Kola Nut are the seeds of the Cola tree, apparently used by the manufacturers of Cola drinks for its natural energizing properties. However, the scientific research on the benefits of Kola Nis more than limited, with many of its current users coming from traditional practical experience. Consumers have praised the formula in various product reviews which claim Nature’s Answer Kola Nut is effective and accomplishes its advertised purpose. Also, consumers mention extra benefits, including mental alertness and clarity among others. Still, you should be aware of the manufacturer’s warning of using the formula for no more than ten days.

The thing I love the most about Kola Nut is that it doesn’t have the crash effect caffeine usually have after its effect wears out. Its effect is really smooth and I feel like it naturally supports my energy levels.

For me, this extract has an effect of producing a clearer state of mental alertness. I am thinking clearly and I am able to do all the tasks during a busy day both at home and at the office.