Ginkgo Biloba is a single ingredient brain supplement designed to support brain function and mental alertness. The company behind this formulation is Nature’s Bounty, a large supplier of such products. With the experience of several decades, the company enjoys a good reputation among consumers.

They also claim to provide special attention to complying with the strictest quality standards, whether we’re talking about the raw materials or the manufacturing facilities (which are audited by an independent quality evaluation firm).

If you prefer a more complex formula, we recommend checking out our Ginkgo Smart review.

2) What Does Ginkgo Biloba Do?

The formula relies on one of the most popular herbal extracts in the natural remedies industry. Ginkgo Biloba extracts are prevalent ingredients in supplements that aim to improve brain or circulatory system functions.

Although various concentrations are available, this formula contains an extract standardized to 24% Ginkgo Flavone Glycosides. Glycosides are compounds that can only be found in this plant and were observed to possess the extraordinary antioxidant qualities for which Ginkgo is famous.

Ginkgo has been widely studied for its potential benefits in various areas, including possible treatment for eye conditions like glaucoma, diabetic retinopathy, or macular degeneration.

Other types of compounds found in the plant extract called Ginkgolides and Bilobalides have been clinically shown to improve circulation to the brain and other parts of the body.

These chemicals can prevent platelet aggregation, making the blood more fluid, thus preventing blood clots and all the health problems that result from that. They also improve venous circulation, a problem that usually causes restless leg syndrome and other health issues.

Ginkgo is also being investigated as potential support in the treatment of cancer and Alzheimer’s disease. Still, research is only at the beginning, and results are inconclusive.

In terms of appropriate dosage, the recommendations vary depending on the health concern. For memory impairment associated with aging, the suggested dose is 240-600 mg, for blood pressure control, 120 mg. For cognitive performance, up to 600 mg of Ginkgo extract per day is adequate.

These amounts are based on positive study results. Still, the best way to go is by asking your personal doctor who can prescribe the correct dosage for your particular problems.

3) How Much Does Ginkgo Biloba Cost?

The formula is sold through various online retailers for a relatively low price of approximately $9 (both concentrations). A store locator useful for US customers is also available on the manufacturer’s site.

For international orders, you can order from the company’s online partners, or you can ask for the formula at your local drug store. As said before, Nature’s Bounty is a trendy brand, and numerous pharmacies and drug stores sell its products.

Nature’s Bounty’s formula looks like a high-quality supply of Ginkgo Biloba. The formula’s daily dosage is 120 mg, a safe dose if we look at the recommendations.

However, the active ingredient has been shown to increase the risk of bleeding, so women who are pregnant or nursing and individuals who are programmed to undergo any surgical procedure are advised to refrain from consuming Ginkgo Biloba supplements.

Consumer testimonials are mostly positive, but a small percentage complains about not experiencing any marketed benefits. Some users have reported side effects like stomach distress or heart palpitations.

Of course, there are always risks associated with any kind of medication, and this is why it is essential to always inform your doctor instead of starting a self-administered treatment. 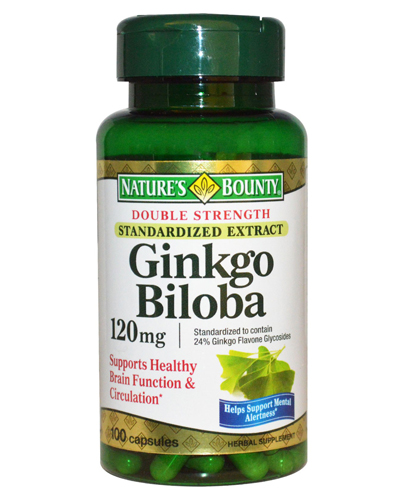