Ginkgold is a dietary formula promoted as an effective booster for healthy memory, concentration, mental activity, and circulation to the brain and extremities.

Nature’s Way, the manufacturer of this supplement, is a reputable company in the nutritional supplements industry and has been active in the business for over 40 years.

Ginkgold is a herbal-based formulation that contains 120mg Ginkgo Biloba extract and claims to be potent, but is this true? Is Ginkgold effective? Keep reading to find out.

Ginkgo biloba is a powerful antioxidant that protects the entire body against oxidative damage known to be the leading cause of a large number of severe conditions affecting the heart and the brain and has been used in many health conditions, including Alzheimer’s disease, depression, erectile dysfunctions, PMS symptoms, asthma, and other diseases related to circulation problems.

Ginkgold is an herbal remedy that contains Ginkgo Biloba extract in its formulation.

Ginkgo biloba has been used to treat symptoms associated with Alzheimer’s disease, glaucoma, macular degeneration and may provide several benefits, including

5) Is Ginkgold Safe for Everyone?

Ginkgold is generally safe for use as recommended in adults; however, Ginkgo biloba itself, the core ingredient in Ginkgold, may cause nausea, diarrhea, and dizziness in some users.

Ginkgold can be purchased from the company’s website, Amazon, or other authorized Nature’s Way resellers.

7) How Much Does Ginkgold Cost?

Ginkgold is a classic plant-based supplement with a potent Gingko biloba leaf extract as its key ingredient. Ginkgo biloba has been used in traditional medicine for its antioxidant and brain enhancement properties.

While little known research has been linked to the use of Ginkgold in particular, its star ingredient, Ginkgo biloba, has been clinically proven to provide relief in conditions like cognitive decline (including Alzheimer’s disease), sexual dysfunction, and many others.

Overall, Ginkgold may be an effective and affordable Ginkgo supplement for you to try out. 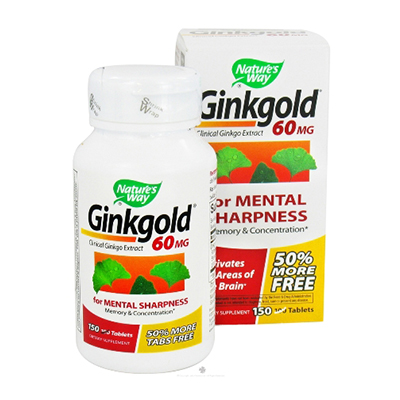 clear
Q:
What are the Ginkgold ingredients?
A:

Q:
What are the Ginkgold side effects?
A:

Supplements containing Ginkgo biloba like Ginkgold may cause some users nausea, diarrhea, and dizziness.

Q:
Where can I buy Ginkgold?
A:

You can buy Ginkgold from the company's website, Amazon, or other authorized Nature's Way resellers.

Q:
How much does Ginkgold cost?
A:

Q:
What are the advantages of taking Ginkgold?
A:

Q:
Does Ginkgold work?
A:

Ginkgold has worked effectively to help enhance memory and concentration and improve circulation, but results may vary by the supplement's strength and individual.

Q:
Who should take Ginkgold?
A:

Ginkgold is formulated for adults who seek a natural approach to achieving improved cognitive and cardiovascular health.

Q:
How should I take Ginkgold
A:

Q:
How do I contact Ginkgold customer service?
A:

You can contact the Nature's Way customer service by calling 1-800-962-8873 or using the live chat feature on their website.

Q:
Can I return Ginkgold?
A:

You can request a refund or replacement product from Nature's Way within 45 days of purchase, as long as your product came from them Nature'sure’s Way authorized seller within the United States.

Q:
Who makes Ginkgold?
A:

Nothing impressive. just another Ginkgo supplement..