Turmeric is a nutritional supplement featuring an extract of the Curcuma Longa plant known as Turmeric. The company behind this formula is Morning Pep and according to the official site is a company specialized in offering the latest weight loss solutions in the form of dietary supplements. Other information about this company is lacking from their presentation which is always a disappointment to us. Another big issue is that we couldn’t find this formula on the official web-page. We’re not sure if the formula has been discontinued or it is a newly launched product which has not yet been uploaded on the official site, but it’s definitely not a good thing.

Turmeric is available online at other retailers where it is described as produced in USA, in GMP certified facilities. There are no GMOs and other artificial ingredients added to the formula. Besides the main active substance (Curcumin) the producer added a black pepper extract which should increase absorption rates and make the formula act faster.

Turmeric, an extract of the Curcuma Longa plant is a traditional medicine in China and India used for thousands of years to treat conditions like: digestive problems (gas, bloating), skin problems, toothaches, chest pain, etc. Turmeric is also a popular spice in India, and one of the ingredients of curry powder.

Today, the plant extract is recommended as a natural remedy in the treatment of digestive problems (irritable bowel diseases), inflammatory conditions (arthritis, osteoporosis, and other joint problems), skin conditions (acne, eczema), and various types of cancers (breast, prostate, lung, or colon cancer) where it is believed to prevent cancer cell growth, cancer cell formation, and the metastasis of cancer.

Curcumin, the main active chemical in Turmeric is actually attributed with the miraculous anti-inflammatory effects. Existing research supports the use of Curcumin and Turmeric as a safer anti- inflammatory alternative to classic drugs which have been observed to cause more severe unwanted side effects.

Turmeric is one of the many components of the popular curry powder. Curry is a very common ingredient used widely in Indian cuisine. Initially used as a spice, Turmeric’s health benefits have been exploited for many years and plant has been traditionally used for its anti-inflammatory and antioxidant effects. According to the latest scientific findings Turmeric has the potential of blocking the growth of cancer tumors. The spice has been used to treat conditions like: chest pain, toothache, hemorrhage, bruises, colic, or bloody urine. The plant extract is also very rich in vitamins and minerals including: Manganese, Iron, Potassium, Copper, and vitamin B6.

Curcumin is considered to be the main active chemical in Turmeric with beneficial effects in humans. Turmeric/ Curcumin supplements are presented as a risk free alternative to standard prescription drugs which are sold as anti-inflammatory solutions but cause numerous unwanted side-effects as well. Other uses of these extracts include: improvement of the ability to digest fats, decreased congestion, reduced gas and bloating, and improvements of skin aspect ( it is commonly used to reduce acne, eczema, or treat psoriasis). Numerous studies have confirmed Turmeric as effective in treating severe conditions related to inflammatory problems including osteoporosis, rheumatoid arthritis, or inflammatory bowel diseases ( Crohn’s and ulcerative colitis). The anti-cancerous properties of Turmeric are also well-documented at this time, and have been validated by scientific research to some extent.

The main problem is that the amount of Turmeric required in order to be effective varies widely and depends on the affection needed to be treated. Some recommendations refer to amounts starting from 500 mg per day effective in treating stomach upset, rheumatoid arthritis, or osteoporosis. Turmeric delivers 600 mg of Curcumin which in theory successfully provides an effective daily dose.

5) What You Need to Know Before Taking Turmeric

Considering the formula is not among the products listed on the official page, we searched for other online stores that commercialize the formula. On Amazon’s online store, a bottle of 60 capsule (providing a 2 month’s supply) is now sold for $14.90 and this is a discounted price. The standard cost of the formula is $34.95, which is still a moderately low cost.

However, a recommended daily intake has not been established. Doses starting from 500 mg per day of Turmeric powder are considered to be potent enough as to promote healthy inflammatory response and maintain optimal overall health.

It looks like Turmeric is a high-quality formula that delivers a relatively high amount of Curcumin, the main active chemical in Turmeric. The formula is free of common allergens and artificial substances including GMOs. Dietary supplements commonly include such ingredients because they are cheaper and have the ability to improve the taste, aspect, or the shelf-life of the product. However, the most important thing is to consume products that are as natural as possible, and this formula looks like a pretty natural supplement.

Although there are not many consumer testimonials at this time, we noticed that those few individuals who used it are satisfied with the results and the quality of their purchase. 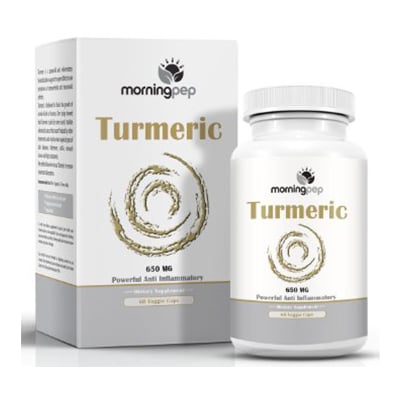 clear
Q:
What does Turmeric contain?
A:

Q:
Turmeric is all about what?
A:

Turmeric formula is offered as a natural solution for those interested in maintaining overall health. The supplement is advertised to maintain healthy muscles, joints, brain, and immune system function, and also help with digestion and acid reflux problems.

It appears that the company behind the supplement, Morning Pep, is specialized in formulating weight loss supplements, but they do not offer any more details related to their activity, the research behind the development of the formula, or origin of the raw ingredients.

This supplement contains a single active ingredient which is Turmeric, a common spice in Indian cuisine also used medicinally for thousands of years. Curcumin is the main active chemical in Turmeric considered to actually possess the anti-inflammatory qualities for which Turmeric is so popular. Research supports the anti-inflammatory effect of Turmeric which is currently prescribed against affections like rheumatoid arthritis, osteoporosis, eczema, acne, Irritable Bowel Syndrome, digestive problems, and various cancer types.

Q:
Are Turmeric benefits actually a reality?
A:

Turmeric seems to be a high quality product because it delivers a potent amount of Curcumin and lacks artificial substances, allergens, or preservatives. The formula is very simple in terms of composition and we love that the producer did not try to squeeze in a lot of ingredients. This is a major advantage as numerous studies have been made on Turmeric alone, and the fact that the supplement itself is not the subject of any scientific study is no problem. Consumer reviews are not numerous (an indication that this may indeed be a newly launched formula) but they generally support the effectiveness of the product. However we have noticed that some consumers have purchased the product for a lower price in exchange of their review.