Turmeric Curcuminoids Review – Is it Effective?

Turmeric Curcuminoids is an herbal supplement advertised as a potent anti-inflammatory and antioxidant.

Golden Glow has more than 35 years of business experience and prides itself with over 6 million orders shipped worldwide. The company offers a wide range of vitamins, herbal formulas, minerals, dietary supplements, and personal care products.

Curcuminoids are the major active components of Turmeric (Curcuma longa). The product contains Curcuminoids from a patented standardized extract (Curcumin C3 Complex).The formula is recommended to be used with caution by pregnant and lactating women, and in case symptoms persist a healthcare provider should be consulted.

1) Turmeric Curcuminoids at a Glance

Turmeric Curcuminoids contains a standardized extract of the Turmeric root.Turmeric is best known as a spice and has been used by the Asian and Indian cuisine for thousands of years. Recent research has revealed its wide spectrum of medicinal applications, which are attributed to its anti-oxidant and anti-inflammatory properties.

Additionally, it has long been used as a treatment for depression, in the Chinese medicine. Scientific research has so far been conducted on animals, but the results may be extrapolated on humans. It is believed that Turmeric assists with the synthesis of the neurotransmitters Serotonin and Dopamine and hence works to promote a balanced mood and alleviate symptoms of mood disorders such as depression. Further human studies are needed to evaluate and confirm the benefits of Turmeric on depression.

There is no standard daily dose established for the main ingredient, and certain Curcumin side effects have been reported with its use (nausea, diarrhea and skin irritation).

Go for New Chapter Zyflamend Whole Body if you want an anti-inflammatory supplement with a Chinese formula.

Turmeric Curcuminoids 500 is an herbal supplement containing extracts from turmeric root as the only active ingredients. Turmeric is very popular in Indian medicine as well as cooking. Curcumin is the active ingredient in turmeric. It has anti-inflammatory and disinfecting properties which make it ideal for external injuries such as cuts and abrasions. When included in dietary supplements, curcumin offers anti-inflammatory, antioxidant, and detoxification qualities. It promotes healthy digestion, healthy liver function and supports the cardiovascular system. Turmeric has been proven effective in the relief of many digestive complications (irritable bowel syndrome, stomach disorders, etc.) and appears to promote weight loss.

Moreover, because it reduces blood sugar levels and prevents the formation of blood clots, turmeric is also beneficial for the healthy functioning of the cardiovascular system. Some studies also suggest this plant may be useful in the prevention of many forms of cancer, especially colon and pancreatic cancer. It appears to slow the spread of cancer cells through elimination, however the Curumin cancer-fighting benefits are far from being supported by scientific evidence. Curcumin side effects are rare and occur in the case of excessive dosage or prolonged use.

5) Precautions of Turmeric Curcuminoids Use

6) How Much Does Turmeric Curcuminoids Cost?

Turmeric Curcuminoids 500 is an average priced supplement. It is sold by 60 capsules which, depending on the chosen dosage, should be enough for one or two months of treatment. Various retailers sell this product, and the price usually varies between them. A convenient way to acquire this product is to order it directly from the manufacturer. You may be offered discounts and money-back guarantees.

The manufacturer recommends taking one to two capsules twice daily with a meal. Consumer reviews are not numerous; however, consumers report effectiveness of the supplement against swollen knees and other inflammatory conditions, and increased energy and overall well-being.

The core Curcumin benefits also advertised for Turmeric Curcuminoids are those of the extract of the Turmeric root. These benefits include a variety of systems, functions and organs, however the ingredient has not been extensively researched for benefits in case of humans.Consumer reviews for the formula mention a few clear benefits; however, they are not numerous, and we cannot draw a general conclusion towards its effectiveness. We may, however, assume that Turmeric Curcuminoids will reach its goal for some consumers, but still advise you to further research this product and decide with your healthcare professional whether this is the right product for you or not. 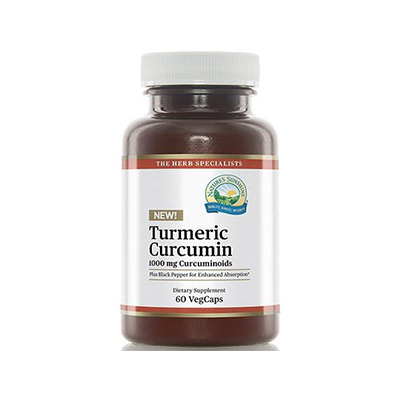 clear
Q:
What are the active ingredients in Turmeric Curcuminoids?
A:

Q:
Turmeric Curcuminoids is all about what?
A:

Turmeric Curcuminoids is an herbal supplement based on a standardized extract of the Turmeric root. The formula manufactured by Nature's Sunshine is claimed to help relieve arthritic joint inflammation and pain, maintain the cardiovascular system health, and to have antioxidant neuro-protective properties. Curcumin cancer benefits as well as Curcumin weight loss reviews have been subject to numerous research studies over the past years.

Research on Turmeric is still in its early stages, but it is believed it can prevent or treat conditions including depression, rheumatoid arthritis, osteoarthritis, migraine headaches, Alzheimer's disease and mild cognitive impairment. Curcumin side effects are minimal, hence no side effects are mentioned for Nature’s Sunshine Turmeric Curcuminoids and consumer reviews are generally positive.

Q:
Are Turmeric Curcuminoids benefits actually a reality?
A:

Turmeric has been used medicinally for thousands of years by Indians. This plant has been scientifically proven to help with inflammations, pain and digestive problems. One should benefit from taking Turmeric Curcuminoids 500 as it is claimed to contain pure extracts of turmeric. However, one must understand that this product works best over extended periods of time. There are other similar products available on the market. You are advised to investigate this formula further and compare it other similar products before purchasing it.

These helped me get rid of my headaches, I can’t thank them enough!

I have been suffering from swollen knees for quite some time before a friend told me about Turmeric. Nature’s Sunshine Turmeric returned mobility in my knees and hands with no side effects. I take 500 mg daily.