Ginger Supreme is an herbal supplement that aims to alleviate nausea symptoms and modulate inflammations. It may support anti-oxidant activity, a healthy heart as well as good blood circulation. The company behind the product is Gaia Herbs.

Gaia Herbs is one of the main growers and manufacturers of organic herbal supplements and herbs in the US. It was set up in 1986 in North Carolina. In 1997, Gaia Herbs started operating its own certified organic farm, which is one of the largest in the country. The company focuses on the production of certified organic formulas from herbs that are processed according to technologies that ensure all the chemical components in the plants are kept intact.

The producer advertises Ginger Supreme as being very potent given the technology the company uses to process the plants. Thus one dose contains more than one gram of raw herbs. It is also fast acting as a result of the fact that the capsules containing the liquid formula are better than the traditional soft-gel or gelatin capsules. They disintegrate within about twelve minutes from being ingested. Ginger Supreme is recommended to people with inflammatory disorders or suffering from nausea (caused by motion sickness for instance). It also has anti-oxidant properties being able to support new cell growth and cell regeneration and it may be useful in maintain good blood circulation.

1) Ginger Supreme at a Glance

Ginger Supreme is an herbal supplement based on a mix of ginger and turmeric, two herbs with anti-inflammatory properties and effective in treating digestive disorders according to folk medicine. According to laboratory studies, ginger contains chemical compounds that interfere with the production of some hormones responsible for inflammations and pains. In addition, some of its organic constituents may promote the flow of digestion juices, therefore ginger may promote healthy digestion, alleviating nausea and vomiting symptoms among other stomach upsets. However, clinical trials on humans have yielded slightly different results but this may be due to the fact that researchers did not use the right dose or did not administer it to patients at the right time according to some specialists. For instance, it is still debatable whether ginger has anti-inflammation properties and whether it is effective in combating motion sickness. Other studies have shown that ginger may help in treating nausea caused by chemotherapy and pregnancy. Some preliminary studies have shown ginger may be effective in treating several heart diseases. Ginger rarely causes side effects which are usually mild. It should not be used by pregnant women, as its effect on the fetus has not been sufficiently studied.

3) What Does Ginger Supreme Do?

Ginger Supreme is an herbal supplement based on a mix of ginger root and turmeric root, both used in digestive problems as well as inflammations. Ginger has been used for centuries as a medicinal herb. Herbalists recommend it against nausea related to motion sickness, chemotherapy, and pregnancy. It contains two chemical compounds that stimulate the production of digestive juices, thus improving digestion. Moreover, it may inhibit hormones that cause pain feelings and inflammation. However, scientific studies have shown mixed or inconclusive results as to its Effectiveness in motion sickness and its anti-inflammation properties. Researchers found ginger may work against nausea caused by pregnancy, but studies still need to be done on how the herb would affect the fetus. It may also help treat nausea associated with chemotherapy when taken before beginning chemo sessions. There are several preliminary studies which have showed that ginger seems to help against heart attacks or strokes because it may prevent blood from clotting. Ginger is relatively safe because side effects are mild, including mainly mouth irritation and mild heartburn.

Ginger Supreme’s formula may be useful however it has not been evaluated by the FDA or researched by scientists.

The manufacturer recommends taking one capsule one or two times per day at meals. Two capsules have 2,330 mg dry herb equivalent. Gaia Herbs does not mention side effects on its official website, but it states that caution is required if you are already taking other drugs or suffer from a particular condition. The product is not recommended while breastfeeding and during pregnancy.

There are several online testimonials about Ginger Supreme. What it has been reported includes the following:

5) What You Need to Know Before Taking Ginger Supreme

6) How Much Does Ginger Supreme Cost?

Ginger Supreme is sold in bottles of 30 capsules or 60 capsules. The average cost for one month’s supply would recommend the product as being relatively pricey to expensive (depending on whether you take one or two capsules daily).

You can return the product if you are not satisfied with it and it can be replaced, or you could also be refunded. The producer also offers discounts, free shipping and a small gift for recurring orders. It also provides a price reduction if you buy more bottles at once. Several online shops offer promotions.

The Ginger Supreme formulation has not been studied by scientists and it is not FDA evaluated as it is a dietary supplement. The manufacturer advises that pregnant or lactating women should not use the product. People suffering from certain medical disorders or currently under medication should also ask for medical advice before taking Ginger Supreme. The producer recommends a daily intake of one or two capsules at meal. One bottle contains either 30 or 60 capsules. Potential side effects are not mentioned on the Gaia Herbs website.

Ginger Supreme is recommended by Gaia Herbs against nausea, inflammations but also for ensuring the well functioning of the heart and blood vessels, and promoting anti-oxidant activity. From a theoretical perspective, the product should work given its list of ingredients and the fact that it is made by a reputable producer. However the formula does not benefit from many online consumer testimonials, therefore there is not much empirical evidence supporting its effectiveness. We recommend asking for medical advice before using the product because it is very potent therefore you may experience side effects more easily. It is also safer to consult a professional if you are already taking other drugs or suffer from a certain illness. 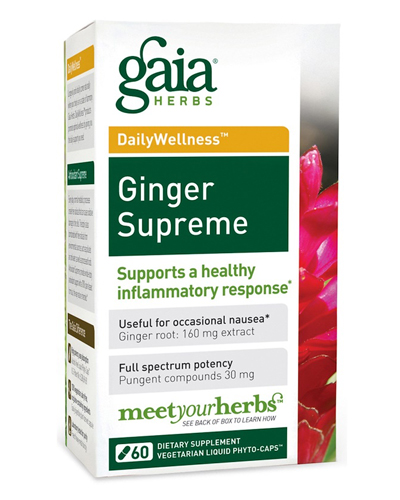 clear
Q:
What are the Ginger Supreme ingredients?
A:

Q:
Ginger Supreme is all about what?
A:

Ginger Supreme is an herbal supplement used in the treatment of nausea symptoms, inflammatory disorders, and for maintaining a good circulatory and anti-oxidant activity. It is produced by Gaia Herbs. The key ingredient is ginger, which has been used for centuries against stomach upsets and for its anti-inflammatory properties. The product should be used by people experiencing occasional nausea (for instance due to motion sickness), inflammations and who want to maintain a well functioning heart and blood circulation.

Q:
Are Ginger Supreme benefits actually a reality?
A:

Supreme Ginger is an herbal supplement whose main ailment claims are based on the properties of ginger, a medicinal herb with a very long tradition. The list of ingredients shows the product may work. Nonetheless, the formula does not seem to be very popular among consumers given the limited number of online testimonials. This may prove that costumers either have not tried it or it does not yield such good results. We advise you ask for medical advice if you suffer from certain diseases with which ginger or turmeric may interfere (like diabetes) or if you are under medication (for instance blood thinners).

I have been using it against high blood pressure but I stopped because the doctor said that Ginger Supreme enhances the effect of my blood thinning medicine.

since taking just one pill a day for about a week now, during the night I have been getting headaches