CinSulin Review – Is it Effective?

Cinnamon is a fragrant and delicious spice commonly used in baking muffins, pies, and delicious sweet treats like cinnamon rolls. Yet, did you know that popular spice may also have health benefits?

Recent clinical studies revealed that a particular patented cinnamon extract (called CinSulin) may have some benefits for your health, primarily in supporting weight management and lowering blood sugar in people with diabetes.

CinSulin is a patented cinnamon extract that claims to support weight loss, lower blood sugar, and reduce body fat. It’s currently included in several different weight loss supplements, all of which feature this ingredient as its main additive.

Unlike the whole cinnamon extract used in most cinnamon supplements, which is just ground-up cinnamon bark, CinSulin’s patented process uses a 100% water solvent to produce a pure and unadulterated extract of cinnamon that ensures the highest quality[1].

Our review will analyze the supplement made by TruNature, as it’s one of the most popular CinSulin-based dietary supplements available.

TruNature is known for producing and selling a variety of products, from skincare products to dietary supplements for children, men, and women.

Some of its best selling supplements include:

Because TruNature is a trademark of Costco Corporation, the company doesn’t have its customer support department. You will have to contact Costco’s customer support service (phone: 1 (800) 774-2678) for any inquiries regarding TruNature and its products.

Other ingredients include hypromellose, cellulose, silicon dioxide, and magnesium stearate. 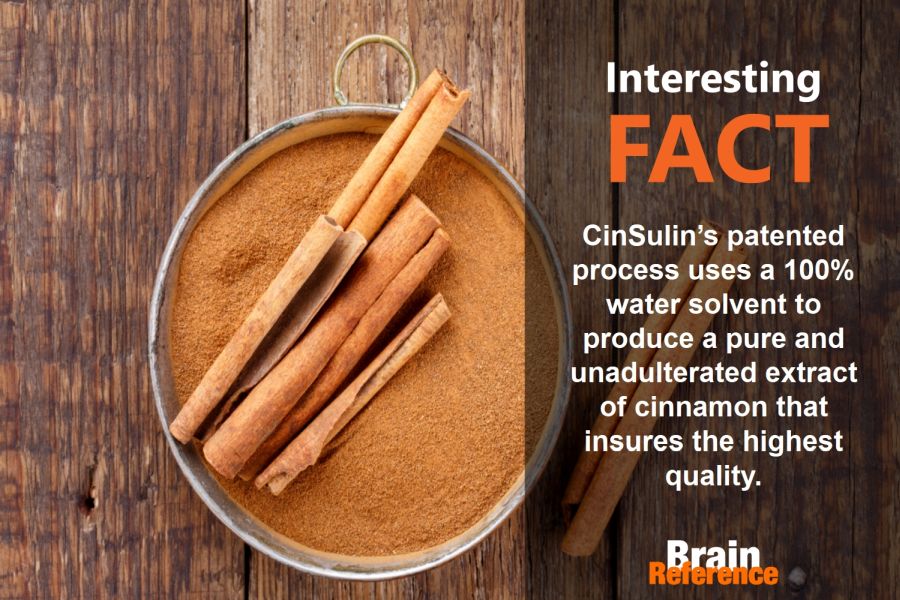 4) Is CinSulin Right for You?

CinSulin is the result of a unique manufacturing process that uses purified water, cinnamon bark, heat, and pressure to form a water-soluble extract. According to TruNature, CinSulin contains only the beneficial substances found in cinnamon in a highly concentrated water-soluble compound.

Possible harmful fat-soluble elements, like coumarin, are removed during the manufacturing process.

If cinnamon is part of your healthy blood glucose regimen or your weight management program, CinSulin may have another advantage. Due to the high amounts of cinnamon available in just one CinSulin capsule, in theory, you will save money.

As for benefits, CinSulin and cinnamon pretty much share the same health benefits.

In Ayurvedic medicine, cinnamon is used as a remedy for indigestion, diabetes, colds, and to help balance a person’s ‘Kapha’ (physical and emotional energies). It is also a common ingredient in cinnamon tea and chai tea, both of which are believed to improve digestion[3][4].

Extracts from the bark, leaves, flowers, fruits, and roots of the cinnamon tree have been used in traditional medicine for millennia to treat nausea, diarrhea, colds, painful menstrual periods, and flatulence. It is also believed to improve circulation, vitality, and energy, particularly in individuals with cold feet[5].

One of the most important active ingredients in cinnamon is a substance called cinnamaldehyde[6]. Cinnamaldehyde gives cinnamon its specific taste and smell, and it may also be responsible for some of cinnamon’s possible health benefits.

Some research shows cinnamon may lower blood sugar levels and have a powerful anti-diabetic effect[7][8].

Cinnamon may also have beneficial effects on neurodegenerative diseases[12][13] characterized by progressive loss of brain cells’ function or structure.

Parkinson’s and Alzheimer’s disease are two of the most common types of neurodegenerative diseases.

Two compounds found in cinnamon appear to inhibit the buildup of a protein called ‘tau’ in the brain, one of Alzheimer’s disease signs.

In a study[14] in mice with Parkinson’s disease, cinnamon helped protect neurons, improved motor function, and normalized neurotransmitter levels. These effects need to be analyzed further in humans.

However, many of the studies supporting the claims above have been done in cells or animals.

Cinnamon does have anti-inflammatory, antibiotic, and antioxidant properties, but for now, there isn’t enough scientific evidence to prove it works that well in people.

Furthermore, consuming regular amounts of cinnamon isn’t likely to have a significant impact on your health. It’s not a good idea to eat a lot of it either. But that’s where the highly concentrated cinnamon extract, CinSulin, could make a difference.

6) Side Effects of Using CinSulin

The National Center for Complementary and Integrative Health (NCCIH)[20] states cinnamon supplements should be safe for most people when adequately dosed.

If consumed in high doses, cinnamon can cause mild sweating, indigestion, and heartburn. Over time, coumarin accumulation in the body can lead to liver damage and impede blood clotting.

Cinnamon can also trigger mild to moderate allergic reactions in some individuals. Symptoms can include nausea, rash, dizziness, or nasal congestion.

We recommend caution if you also take other supplements that lower blood sugar levels[21], including:

The same holds true with diabetes medications[22]. Some medications used for diabetes include:

Taking substantial doses of cinnamon might harm the liver, especially in people with existing liver disease. Cinnamon may also interact with certain medicines that may damage the liver[23].

CinSulin can be purchased from all major online retailers like Costco, Amazon, Walmart, and eBay. It’s also available in many local stores and supermarkets.

9) How Much Does CinSulin Cost?

CinSulin is available in two forms: 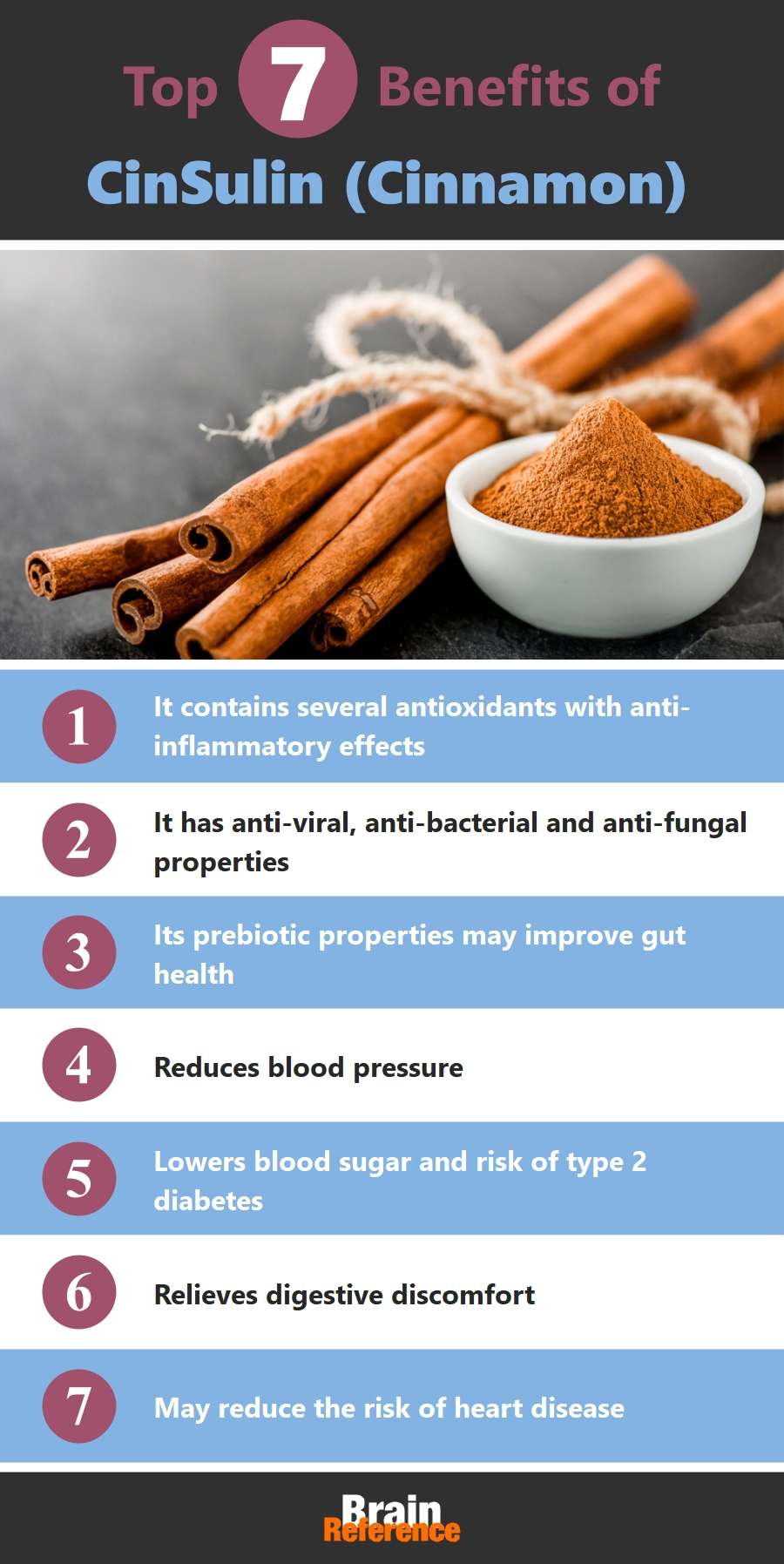 As a dietary supplement, take two (2) capsules once daily with water during a meal.

"My dad raves about this product. He is vegetarian and before we had to open up all the capsules so he could eat them. He's noticed a huge reduction in his blood glucose. He monitors his blood sugar every morning when he wakes up, and on days he doesn't take it, his fasting glucose is 120, but when he does take it, his fasting is 100." [Read full review]

"It helps keep my sugar levels at a more normal amount. I am borderline diabetic right now and cannot handle the metformin medication the doctor wanted me to take. This product is fantastic." [Read full review]

"It works perfectly to lower blood sugar naturally. I highly recommend it for diabetics and pre diabetics or just someone wanting to keep their blood sugar at a manageable level. The Chromium in the formula also greatly benefits your immune system." [Read full review]

12) Our Final Take On CinSulin

Extensive clinical studies suggest that the compounds in cinnamon have antimicrobial, antioxidant, antidiabetic, and anti-inflammatory properties, and that they might offer protection from cardiovascular disease and cancer, among other conditions.

CinSulin has also been studied in human clinical trials and has been found to be safe and more effective than a standard cinnamon extract. However, while these initial findings are encouraging, additional research is required to determine all the long-term benefits of CinSulin.

Overall, CinSulin is a well-received dietary supplement, and it can be a good choice for people looking for a natural way to lower blood sugar levels and burn fat.

If you are interested in taking CinSulin, we recommend integrating the supplement as part of a healthy lifestyle that includes staying active daily, a healthy eating regimen, and getting at least eight hours of sleep each night. 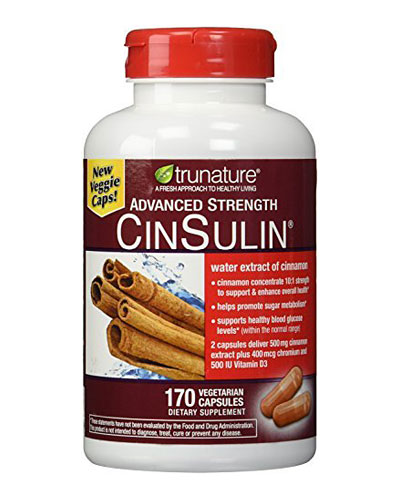 clear
Q:
What does CinSulin contain?
A:

Q:
What is CinSulin supplement?
A:

Q:
What are the side efects of taking CinSulin?
A:

CinSulin is advertised as safe to use due to the unique extraction process that removes all potentially dangerous substances from cinnamon. However, we recommend caution when taking CinSulin due to the high concentration of cinnamon available in each capsule. When consumed in high doses, cinnamon can cause mild sweating, indigestion, and heartburn.

Q:
Who sells CinSulin online?
A:

TruNature CinSulin can be purchased from all major online retailers like Costco, Amazon, Walmart, and eBay. It's also available in many local stores and supermarkets.

Q:
What is the cost of CinSulin
A:

Q:
What are the benefits of CinSulin?
A:

CinSulin has been researched, primarily, for weight loss and lower blood sugar. However, while the initial data are encouraging, more research is needed to determine all the long-term benefits of this patented cinnamon extract.

Q:
Can I take CinSulin with a prescription?
A:

While technically a purified cinnamon extract, CinSulin may still interact with diabetes medications and certain medicines that may damage the liver. We recommend consulting with a medical doctor if you are under treatment or have a known medical condition before taking TruNature CinSulin.

Q:
Can I take CinSulin with other supplements?
A:

CinSulin can be used with multivitamin supplements like Centrum Silver Men. However, we advise caution when taking this supplement with other supplements that lower blood sugar levels, such as Alpha-lipoic acid, Bitter melon, Chromium, Devil's claw, Fenugreek, Garlic, Horse chestnut, Panax ginseng, Siberian ginseng, or Psyllium.

Q:
Does CinSulin have a recommended daily dosage for children?
A:

TruNature CinSulin is not recommended for children and adolescents under 18.

Q:
Are there any dangerous ingredients in CinSulin?
A:

Q:
Who uses CinSulin?
A:

CinSulin is intended for people trying to lose weight or reduce blood sugar levels using a natural product. Still, as with most weight-loss dietary supplements, CinSulin may work better when combined with a healthy diet, daily exercises, and enough rest each night.

Q:
Can I take CinSulin if I'm pregnant or nursing?
A:

CinSulin is not recommended to pregnant or nursing women.

Q:
How should I take CinSulin
A:

As a dietary supplement, take two (2) capsules once daily with water during a meal.

Q:
What is the fastest way of contacting CinSulin customer support?
A:

Since TruNature is a Costco Corporation trademark, the company doesn't have a dedicated customer support department. Instead, you will have to contact Costco's customer support service at 1 (800) 774-2678 for any inquiries regarding TruNature's products.

Q:
Can I return CinSulin?
A:

TruNature sells through many online and offline retailers (local stores and supermarkets). The return policy depends on the store you purchased the product from.

Q:
What are the most common complaints about CinSulin?
A:

Most buyers are happy with this supplement. However, some consumers complained about the product being too expensive for what it offers and when compared to other similar cinnamon-based dietary supplements.

Q:
What do CinSulin reviews say?
A:

CinSulin reviews and testimonials on Amazon are overwhelmingly positive. The supplement is rated 4.7 out of 5 (721 ratings), with 91% of the users rating the product with at least 4 stars.

Q:
Who makes CinSulin?
A:

CinSulin is made by TruNature.