GinkgoForte is advertised as a formula designed to help enhance memory and alertness. The formula is manufactured by Blackmores, an Australian company which claims to be Australia’s leading natural health brand. The company was set up in Queensland in the 1930’s and enjoys a vast business experience. Today, Blackmores develops and markets a variety of vitamins, minerals, herbs and other nutrients for health conditions ranging from brain health to weight management.

Also, according to the manufacturer, the extract is processed to reduce the ginkgolic acid powerful skin allergenic reactions.

Claimed benefits include enhanced attention and mental clarity. According to the producing company, GinkgoForte is formulated to replicate the effective dose used in published clinical research, on the condition that the formula is taken as recommended.

GinkgoForte is a potent formula based on a standardized Ginkgo Biloba extract. The product promotes mental alertness and improved memory, attention and mental clarity.

Ginkgo Forte contains a Ginkgo extract standardized to contain ginkgo flavonoglycosides 10.7mg and ginkgolides and bilobalide 2.7mg, a level of standardization demonstrated safe and effective in numerous clinical studies. The standardized Ginkgo Biloba extract contains two fractions of active components, ginkgo flavoneglycosides and terpene lactones, which constitute about 24% and 6% of the extract respectively.

In relation to its brain enhancement properties, Ginkgo Biloba extract has been shown to improve brain blood circulation, hence increase oxygen and nutrient supply to the central nervous system. It also protects the brain against oxidative damage of nerve cells and has been clinically proven to be effective in improving working memory in healthy individuals.

How each of the active ingredients of the standardized Ginkgo Biloba works is not fully understood. However, ginkgo flavoneglycosides seem to be powerful anti oxidants and may contribute to the antioxidant properties of ginkgo biloba, whereas Terpenes have circulation enhancing properties.

Ginkgo is generally safe but has been reported to cause stomach upset, nausea, dizziness, diarrhea or headache. Also, as a precaution, you should know that it may decrease the ability of the blood to clot and to interfere with diabetes and seizures.

3) Is GinkgoForte Right for You?

Advertised as a potent formula which has been based on a standardized Ginkgo Biloba extract, this product promotes memory enhancement, mental alertness, mental clarity, and attention.

This particular remedy contains a Ginkgo Biloba extract that was standardized ginkgo flavone glycosides at 10.7 mg and glycosides at 2.7 mg, this level of standardization being demonstrated as safe and effective by some clinical studies. This extract has two fractions of active components which constitute about 24% and 6% of the extract. In comparison with similar remedies, the Ginkgo Biloba extract found in this product demonstrated improved brain blood circulation and enhancement of central nervous system properties. Even though each of the active ingredients has specifications which haven’t been fully understood, they seem to possess potent antioxidant properties. Terpenes benefit the organism by promoting both peripheral and central circulation.

Even though Ginkgo Biloba is considered safe, there have been reported cases of dizziness, diarrhea, nausea, and stomach upset. As a precaution, people should be aware of the fact that it may decrease the blood’s ability to clot and interfere with seizures and diabetes.

Because there are no online available customer testimonials or scientific proof to support this product’s Effectiveness, if people desire to follow this treatment, they should be aware of the fact that the label dosages are necessary.

GinkgoForte is sold by bottles that contain 80 capsules and can be found for purchase at a moderate price either on manufacturer website or other online or offline retailers. A bottle is sufficient for 27 days of treatment. When people purchase this remedy in larger quantities, retailers may offer promotions and discounts.

The recommended dose is 3 tablets of GinkgoForte daily with meals. GinkgoForte’s effectiveness is hard to assess with no consumer testimonials or any scientific proof brought by the manufacturer. The manufacturer claims the formula may rarely cause mild gastrointestinal symptoms, headache or dizziness.

Ginkgo Forte is a dietary supplement based on a Ginkgo Biloba standardized extract advertised to provide memory and concentration support to adults. According to the manufacturer the extract is processed in such a way that ginkgolic acid’s skin allergenic reactions are minimized. No further details are offered.

The manufacturer, Blackmores is indeed a reputable health supplements manufacturer, and even though no money back guarantee is available for the formula, the reputation and expertise of its manufacturer may be considered a guarantee.
To conclude, GinkgoForte is based on the standardized extract of Ginkgo leaf, therefore it may be considered a safe supplement. Still, we advise you ask a healthcare specialist before deciding to use any Ginkgo Biloba product. 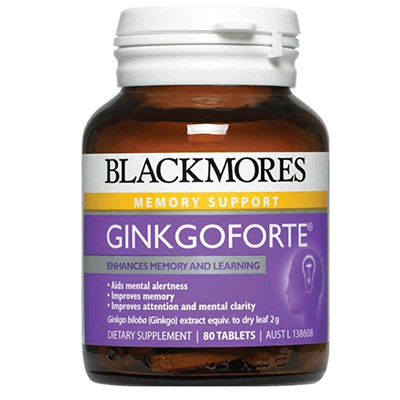 clear
Q:
What does GinkgoForte contain?
A:

Q:
What is GinkgoForte supplement?
A:

GinkgoForte is advertised to be a formula that aims to aid with mental alertness. The manufacturer of this product is Blackmores, a company operating in Australia for more than 70 years. GinkgoForte is a dietary supplement that uses Ginkgo Biloba as sole active ingredient, as to support blood flow in the body, thus aiding with oxygenation of the brain and improving attention as well as mental clarity. This product is advertised as safe to use and highly effective. However, we advice caution as Ginkgo Biloba is well known for its anticoagulant properties and it may interact with anticoagulant medication.

Q:
Are GinkgoForte benefits actually a reality?
A:

GinkgoForte is manufactured as a dietary supplement which has been based on a Ginkgo Biloba extract which has been specifically designed to promote concentration and memory support for adults. The manufacturer claims that the extract has been processed in ordered to minimize skin reactions. However, no studies or customer testimonials are offered to support the product's Effectiveness.

The company, Blackmores is a reputable health supplements factory even though no money back guarantees available. The only guarantee customers receive the reputation and expertise of the manufacturers.

Overall, this formula may be considered a safe supplement if the label dosages are followed.

My attention got better after using this for only two weeks.