Brain Booster Review – 12 Things You Should Know Before You Buy

Our Brain Booster review below will analyze the most critical elements of this nootropic supplement, starting with the manufacturer and finishing with the claimed benefits, cost per serving, potential side effects, and what real buyers think of the product.

1) What is Brain Booster?

Brain Booster made by Vital Vitamins is a popular nootropic supplement for focus, concentration, attention, clarity, and memory. While not unique, the formula includes several high-profile ingredients such as Bacopa Monnieri, Ginkgo Biloba, DMAE, and Rhodiola Rosea.

2) The Company Behind Brain Booster 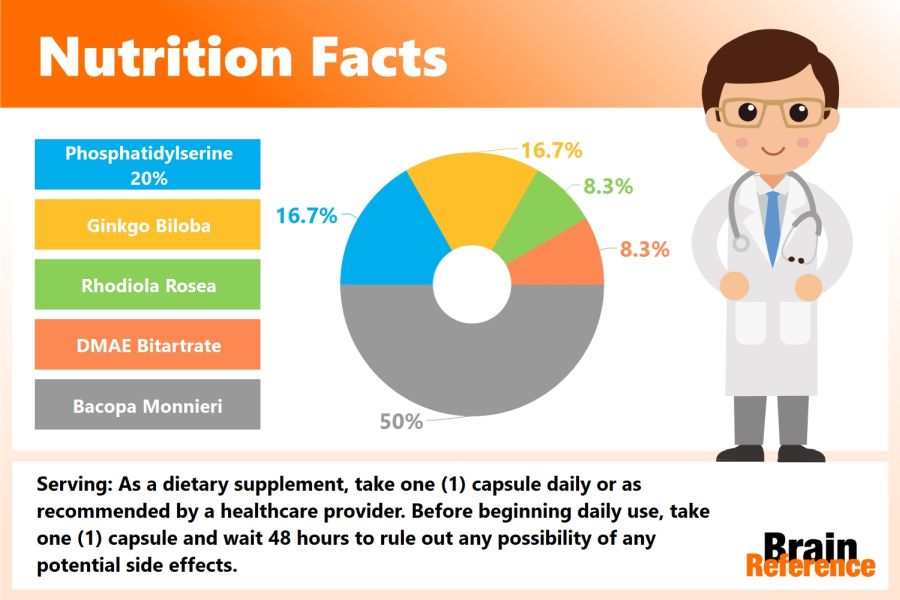 Bacopa Monnieri is an herb used for centuries in Ayurveda – the traditional medicine of India. Extracts from this plant are frequently praised as natural treatments for thyroid health, anxiety, and memory disorders.

Preliminary studies and research indicate that Bacopa Monnieri may also possess powerful antioxidant properties. The herb contains saponin compounds (known as bacosides), which may inhibit inflammation in the brain and support brain chemicals’ communication associated with memory, cognition, and learning.

Researchers asserted that Bacopa Monnieri might improve cognition, but well-designed trials comparing the supplement to medication are needed to better understand this plant’s potential benefits.

An earlier report[6] examined previously published studies on Bacopa Monnieri for cognitive performance and found some data indicating that extracts from this herb may improve memory during free-recall tests.

In a 2016 study[7] of 60 college students, scientists discovered that six weeks of twice-daily therapy with Bacopa Monnieri (at a dose of 300 mg per day) induced improvements in tests relating to cognitive function.

Rhodiola Rosea is an adaptogenic herb that has been used for centuries all over the world to treat a wide range of health issues.

For instance, Vikings used Rhodiola to enhance mental and physical endurance. Furthermore, the unique compounds available in this plant may support adrenal glands’ functioning and help your body cope with stress and anxiety.

A randomized placebo-controlled trial[8] published in Phytomedicine in 2015 found that extracts of this herb may alleviate symptoms of depression. Still, its effects were not as significant as scientists expected them to be. Rhodiola did not reduce symptoms as efficiently as Sertraline, a prescription antidepressant, although it produced fewer and milder adverse effects.

However, in another clinical trial[9], A. Heufelder, D. Edwards, and A. Zimmermann concluded that Rhodiola extract might help individuals perform better in a social environment and at work by improving their mood and reducing fatigue.

Ginkgo Biloba is an antioxidant-rich herb typically utilized to improve memory and support overall brain health. Its seeds have been used for millennia in Traditional Chinese medicine for their healing benefits[10].

However, most brain supplements available today use extracts from Ginkgo Biloba leaves.

Ginkgo Biloba supplements have been shown to improve mental processing and support memory in healthy older adults when taken daily for six weeks[11][12].

DMAE is a molecule with unique properties. It’s obtained primarily from fish, with small amounts produced naturally in the human brain.

DMAE users also routinely report improved focus, better sleep patterns, and mental clarity, and better short-term memory, all of which may be particularly valuable for those who work in deadline-oriented or high-pressure environments.

DMAE supplements are also used in children diagnosed with ADD/ADHD. One review study[15] concluded that DMAE might have similar effects as Ritalin on children with ADHD.

Giving the ingredients available in this nootropic supplement, some users may experience mild to moderate adverse effects, typically as a response to how their bodies adjust to the supplement.

DMAE side effects[16] may include:

Possible adverse effects associated with the use of Bacopa Monnieri[17][18] may include:

Ginkgo Biloba is another herb that may cause adverse effects[19] in some users, including:

Brain Booster contains Ginkgo Biloba and Rhodiola Rosea along with other herbal ingredients.

The available research suggests that herbal extracts are more likely to cause adverse effects and negative interactions with specific prescriptions when continuously taken for more than 30 days. Therefore, we recommend cycling the supplement regularly.

We also recommend taking one week off every three weeks as a minimum. Longer breaks are advised after repeated cycles.

7) What You Need to Know Before Taking Brain Booster

Some prescription medications that may interact[20][21][22][23] with ingredients in Brain Booster include:

8) Where to Buy Brain Booster?

Brain Booster is available primarily on Amazon and eBay. You can also purchase the product directly from the manufacturer.

9) How Much Does Brain Booster Cost?

10) How to Take Brain Booster

"My husband and I are always on the lookout for the best herbal remedies for our mental dysfunctions. This does a great job of focusing you into attention and helping my head be a little less foggy. I do seem to think more clearly, as long as I have something to focus on." [Read full review]

"They do, work, but I am on my fourth bottle, and I might stop because it feels like they aren't doing anything for me anymore, but I definitely felt a difference in the beginning." [Read full review]

"I was not a fan of this product, mainly because it made me sleepy. I want to have energy and be alert, and this did not give me that. I was just in a "whatever" mood, and I literally took a day nap. That does NOT usually happen... " [Read full review]

There are lots of nootropics that claim to improve cognitive function. However, it is crucial to ensure that you get the best product for yourself.

Brain Booster is a best seller nootropic supplement on Amazon and one of the most popular brain supplements in the United States.

The formula offers some proven ingredients such as Ginkgo Biloba, Bacopa Monnieri, DMAE, and Rhodiola Rosea that may help support your brain health.

Overall, Brain Booster made by Vital Vitamins includes a good mix of nootropic ingredients and adaptogens to give your brain a welcome boost. 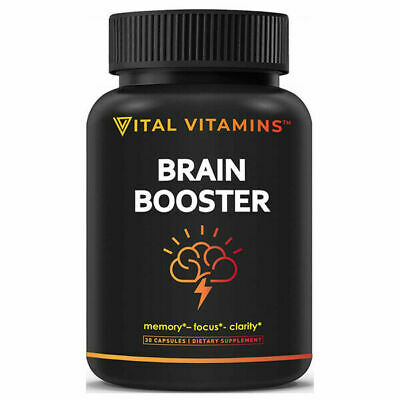 clear
Q:
What are the active ingrediens in Brain Booster?
A:

Q:
What is Brain Booster supplement?
A:

Brain Booster is advertised as a nootropic supplement for focus, concentration, attention, clarity, and memory.

Q:
What are the Brain Booster side effects?
A:

Q:
Where can I buy Brain Booster?
A:

Vital Vitamins Brain Booster is available primarily on Amazon and eBay. You can also purchase the product directly from the manufacturer.

Q:
What is the cost of Brain Booster
A:

Q:
What are the benefits of Brain Booster?
A:

Q:
Does Brain Booster work?
A:

Brain Booster is one of the best-selling nootropics in the United States, and it has received thousands of positive reviews on Amazon alone. And while some ingredients still need additional research and clinical trials to fully prove their effectiveness, the preliminary results are encouraging.

Q:
Can I take Brain Booster with a prescription?
A:

This nootropic supplement contains herbal extracts that may interact or affect the way certain medications work. We strongly recommend consulting a medical doctor before taking the nootropic if you are under treatment or have known medical conditions.

Q:
Can I take Brain Booster with other supplements?
A:

You can take Brain Booster with other nutritional supplements or multivitamins.

Q:
Does Brain Booster have a recommended daily dosage for children?
A:

Vital Vitamins Brain Booster is not intended for children or teenagers under 18.

Q:
Are there any dangerous ingredients in Brain Booster?
A:

Brain Booster doesn't contain any toxic, banned, or potentially dangerous ingredients. However, certain herbal extracts are more likely to cause adverse effects and negative interactions with specific prescriptions when continuously taken for more than 30 days. We recommend cycling the supplement regularly, taking one week off every three weeks as a minimum.

Q:
How do I know if Brain Booster is right for me?
A:

Brain Booster may be beneficial for individuals who work in stressful or deadline-oriented environments and students who may need a boost in cognitive performance.

Q:
Is Brain Booster recommended for pregnant or nursing women?
A:

Q:
How should I take Brain Booster
A:

As a dietary supplement, take one (1) capsule daily or as recommended by a healthcare provider.

Q:
How do I contact Brain Booster customer service?
A:

Q:
Can I return Brain Booster?
A:

Brain Booster is backed by a 60-day, 100% money-back guarantee. If, for some reason, you are unhappy with your purchase, simply contact the Vital Vitamins customer support department and request a full refund.

Q:
What are the most common complaints about Brain Booster?
A:

Q:
What do Brain Booster reviews say?
A:

Vital Vitamins Brain Booster reviews and testimonials on Amazon are very positive. The supplement is rated 4 out of 5 (29,511 ratings), with 71% of the users rating the product with at least 4 stars.

Q:
Who makes Brain Booster?
A:

Brain Booster is made by Vital Vitamins.