Spirulina Review – 8 Things To Look For

Spirulina is a dietary supplement ho advertises the wonderful benefits of the algae called Spirulina. The manufacturer of the formula is the United States based company called Alfa Vitamins Laboratories. The product’s core ingredient has been credited for a large variety of benefits, including some that refer to improving the immune system function, regulating blood pressure, and maintaining optimum oxygenation level for the well functioning of the entire body. As for most of its formulas presented on the official website, the manufacturing company fails to give details on the exact benefit claims of the formulation or other specification regarding the origin of the Spirulina used to create the formula.

This is important because there is concern about contamination of the blue-green algae to which Spirulina also belongs, contamination with microcystins in particular. Some states in the United States explicitly require that producers mention the exact limit of microcystins concentration in their products, although a clear maximum intake from these substances is not regulated.

Alfa Vitamins Laboratories is a successful manufacturer of dietary supplements since 1994. The company distributes its products internationally to over 1600 distributors from 51 countries. The company markets a large number of capsules, tablets, herbal formulations, tinctures and liquid formulas in more than 51 countries worldwide.

Spirulina is designed for adult use.

Spirulina is based on a Spirulina extract in concentration of 500 mg. Spirulina is an algae that naturally grows in wild salty lakes found in some parts of Africa and Mexico. The plant has been historically used as food source by the Aztec people, thanks to a rich content of vitamins (Vitamin A, a range of B vitamins), minerals (Magnesium, Calcium, Iron, and Zinc), as well as proteins. Spirulina is an excellent source of vegetable B 12 vitamin, otherwise mostly found in animal origin dietary sources. Still, many do not know that the B12 from this algae is not bioavailable, meaning it cannot be absorbed by the body, hence becoming irrelevant to the nutrient configuration of the plant.

Numerous clinical trials and scientific documentation reference the alga in relation to such conditions as diabetes, ADHD (Attention Deficit Hyperactivity Disorder) in children, Chronic Fatigue Syndrome, and a number of neurological functions including memory, mental clarity, and concentration capacity. In addition, the alga has been linked to potential benefits against mood and neurological imbalances that lead to anxiety or depression.

The plant itself is generally considered safe for use, except when contamination levels with microcystins are elevated. No side effects, precautions or drug interactions are mentioned for the product.

3) Is Spirulina Right for You?

This supplement is based on an extract of the blue-green algae with the same name. The algae are often referred to as a super food because of the high content of minerals, vitamins, proteins, and antioxidants–nutrients required by vital body functions and processes to run smoothly. Proposers of the algae claim the plant contains more than 100 minerals and vitamins and that more than half of the composition consists of proteins. Because of its numerous therapeutic uses, Spirulina is considered a broad-spectrum dietary supplement which has been the topic of a large number of research papers and clinical trials.

The algae are also one of the few vegetable sources of Vitamin B12, although many people are unaware that this is not a bioavailable source. Both animal and human testing available can reveal the most significant benefits of the superfood. Positive results have been registered against fatigue (including some reports of chronic fatigue syndrome improvements), asthma, digestion problems, obesity, elevated blood pressure, liver damage, infections, and others.

Specifically, there have been mentioned diseases and conditions such as anxiety disorders, panic attacks, bipolar disorder, ADHD, and depression to mention only a few referenced diseases. The plant is generally safe for use for most people; however, safety concerns for small children exist because of the substance’s inclusion of toxic substances, including one called anatoxin, ions found in the environment that cause radioactivity. Although a daily dosage is not clearly established, it appears that a daily quantity of more than 50 mg per day may be unsafe.

The recommended dose for this supplement is one tablet daily during a meal.

5) Precautions of Spirulina Use

6) How Much Does Spirulina Cost?

The price for a bottle of Spirulina is relatively low, similar to what other Spirulina formulas offer. The manufacturer offers no guarantee to the formula’s purity, as it does not mention the origin of the algae used. No reviews are available either to evaluate the extent of its Effectiveness and consumer satisfaction. The site offers secure online purchasing guarantees, and a 100% money back guarantee for products that are not opened. In case the product has been used, a partial refund is available, prorated determined by the number of tablets missing from the bottle. The manufacturer offers no free trial period or samples.

The suggested dose for Spirulina is 1 capsule daily.

8) Our Verdict on Spirulina

Spirulina is based on one of the many Superfoods turned into a mass dietary supplement by modern dietary supplements producers and a little marketing. The alga has been linked, most of the times with no scientific ground, to benefits that range from immune system protection to anti-anxiety properties. The truth is that the supplement is not involved in any clinical trials, nor does the manufacturer provide a thorough list of its core constituents, levels of contamination (even if there is none), or source of the alga. This is particularly the reason why we recommend that a healthcare specialist is consulted before use so that correct diagnose and consequent treatment plan are established. 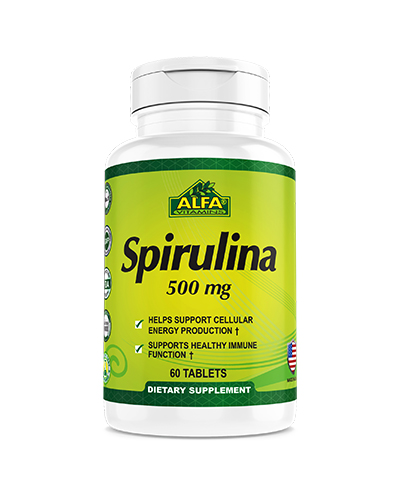 Customers Questions and Answers with Spirulina

clear
Q:
What are the active ingrediens in Spirulina?
A:

Q:
What is Spirulina?
A:

Spirulina is a dietary supplement offered by Alfa Vitamins Laboratories which advertises the health enhancing benefits of Spirulina. The core ingredient belongs to the class of blue-green algae and has been used for nutrition purposes for thousands of years. The formula is able to provide high levels of vitamins, minerals, and proteins in order to protect the body from various conditions that affect the immune system, the cognitive system (including Alzheimer's disease), mood problems such as depression and anxiety, and attention disorders. Spirulina is designed for adult use.

Q:
Does Spirulina work?
A:

Spirulina is one of many Spirulina-based supplements currently available in dietary supplement stores all over the world. As a result of trends shifting towards natural, organic sources of food, the popularity of such super foods as this one has increased to unprecedented levels.

This appears to be a good alternative if we are to consider the partial or full money-back guarantee and the reputation of the manufacturer. However, concerns may arise from the fact that the manufacturer fails to offer details on where the Spirulina has been harvested, what levels of contaminants that it contains, what kinds of contaminants it contains, etc. Caution is recommended.

My memory is sharper, my mind is clearer and I can pay more attention to what’s around me, especially on a very busy day at the office. Love this Spirulina supplement!

Alfa Vitamins Spirulina provides an excellent price-benefits ratio. I was recommended use by my nutrition specialist, due to a lack of minerals. I always choose the natural path if there is one and this supplement satisfies me completely.