Energy Tonic is an herbal supplement aimed at helping the body fight against the negative effects that stress has on our everyday lives. It also boosts physical endurance. The product is manufactured by Urban Moonshine.

Urban Moonshine is a small family business started in 2009 that develops and sells organic products. Its product range is not very diversified as it is primarily comprises bitters and tonics. They are made of various organically grown plants such as ginger, ginseng, fennel, angelica, dandelion and cinnamon. The producer is relatively new on the market for herbal remedies (less than five years) therefore in our view it does not have an established reputation.

According to the manufacturer, Energy Tonic is made of organically grown herbs that prevent stress and treat stress related complications (these are called adaptogenic herbs). It can help you increase your physical and mental endurance as it gives a boost to your brain functions. It can also be used daily to improve concentration and raise your energy supply. In addition, it improves your state of general health and well being. Therefore, the formula should be used by athletes and individuals interested in improving the functioning of their adrenal system. Persons with a weak adrenal system suffer from weakness, headaches, memory problems, lethargy, dizziness, and food cravings.

1) Energy Tonic at a Glance

Energy Tonic by Urban Moonshine is an herbal supplement based on adaptogenic plants which does not have an immediate effect. Herbal tonics, by definition, do not act fast. They are formulations that gradually restore the body’s natural defense mechanism and energy levels, so that there we are less prone to illnesses.

It is a fairly new product, being launched in the first quarter of 2012. One of its main ingredients is licorice root. Specialists recommend licorice for the treatment of adrenal fatigue. Among the symptoms of adrenal fatigue we would mention: lack of energy in the morning and during late afternoon, frequent respiratory diseases, occasional memory problems, need of coffee and salty and high protein food, low sex drive, and mild depression. Licorice has a beneficial effect as it regulates the hormone production in adrenal glands (hormones like adrenaline and cortisol). High levels of cortisol for instance can weaken the immune system and interfere with digestion and cell regeneration. Side effects of licorice may appear when taken in large amounts (more than 30 grams for more than a month), i.e. low potassium which causes a state of weakness and high blood pressure.

3) Is Energy Tonic Right for You?

Energy Tonic is an herbal supplement which can help you deal with modern world problems such as stress and anxiety. It is also recommended to athletes as it enhances endurance. Moreover, it can be used to improve your concentration and to increase energy levels.

It contains a lot of plant roots like Rhodiola, Ginseng, and ginger. Rhodiola has been shown in scientific research to affect the level of dopamine and norepinephrine, two neurotransmitters which control mood and feelings of stress. Therefore, it may be good in the treatment of moderate and mild depression. Potential side effects include nausea, vomiting, chest tightness, and rash.

Ginger root inhibits the production of hormones that induce the feeling of pain and increase inflammations. The Chinese plant Fo-Ti contains, according to preliminary research, an antioxidant that encourages new cell growth and works against inflammations as well. Hawthorn, another ingredient, can improve symptoms associated with high blood pressure and heart diseases. American ginseng helps in increasing concentration and improving the functioning of your immune system. Eleuthero or Siberian ginseng differs chemically from American Ginseng, but it has similar ailment claims. Schisandra is another plant efficient against stress, in increasing immunity, and energy levels.

Scientists have not documented the formula behind Energy Tonic. However, most of its ingredients have traditionally been used as remedies for stimulating the immune system, boosting energy, improving concentration, and reducing stress. Urban Moonshine does not mention any side effects. As for directions of use, the manufacturer recommends taking one-half of teaspoon (around 2.5ml) once or twice per day in a bit of water.

There are several online testimonials about Energy Tonic. What it has been reported includes the following:

6) How Much Does Energy Tonic Cost?

The product comes in bottles of 2 oz or 8.4 oz. Since the manufacturer recommends taking 2.5 or 5 ml per day, a bottle of 2 oz (almost 60 ml) would cover the supply for twelve days (using the maximum dose). Taking into consideration the average cost for one month’s supply, we believe the formula is relatively expensive. Some distributors also offer the product at a discount.

Energy Tonic can be ordered directly from the manufacturer’s website but also from several sellers’ online stores. Shipping charges are affordable. It can also be purchased from retailer locations around the country.

The Energy Tonic formula has not been researched by scientists, as it is generally the case with herbal supplements. The manufacturer does not mention any side effects. However it advises pregnant women against using the tonic. Urban Moonshine recommends taking ½ teaspoon once or twice per day therefore you would consume about 180 ml per month when taking the maximum dose. Since the product comes in bottles of 2 oz or 8.4 oz, you would use 2.5 bottles of 2 oz or roughly 60% of the bigger bottle.

8) Our Verdict on Energy Tonic

Energy Tonic is an herbal supplement containing a lot of extracts from plants known for their effectiveness in protecting the immune system, regulating stress hormones and boosting your energy. There are several consumer reviews saying that the formula improves your general balance, which might prove that Energy Tonic is indeed effective. We believe that you should ask for medical advice before using this formula due to the fact that the efficiency and potential side effects of these plants combined have not been studied by specialists. In addition, the product does not have an established reputation as it has been on the market since the first part of 2012. 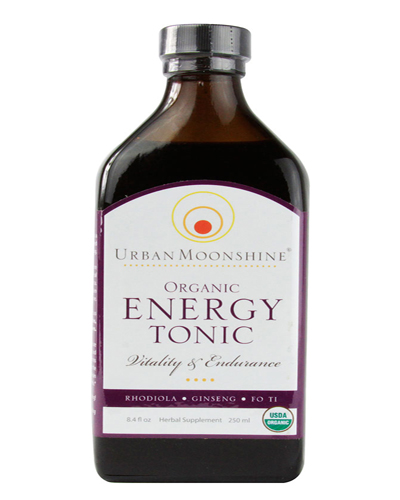 clear
Q:
What are the core ingredients in Energy Tonic?
A:

Q:
What is Energy Tonic supplement?
A:

Energy Tonic is an herbal supplement that aims to enhance your brain functions and help you cope better with the effects of stress and physical effort. It is manufactured by Urban Moonshine, a small family business in Vermont. It contains extracts from several plants such as rhodiola, licorice, and schisandra which have been traditionally used to strengthen the immune system, enhance mental concentration or physical endurance. The manufacturer warns pregnant women against using the product. Athletes, as well as individuals wanting to provide additional support to their adrenal system, may find Energy Tonic useful.

The formula behind Energy Tonic has a lot of ingredients, and we are not sure how they interact with each other and what side effects they may have when acting together since there have not been any clinical trials made. The fact that the formula has not been researched is not unusual since this is an herbal remedy. Also, there are several customer testimonials which show clients have usually been pleased with how Energy Tonic works. In our view, you should first ask for advice from a healthcare specialist before using the product, having in view the many plant extracts it contains.

I’ve been stressed out from the long working hours. With Energy Tonic I’ve been able to improve my focus and drink less coffee!