Stabilium 200 Review – Is it Effective?

Stabilium 200 is a dietary supplement marketed to be useful for coping with physical and emotional stresses and for supporting healthy sleep patterns, energy, memory and mood. The formula is manufactured by the American company Nutricology. The company claims that Stabilium 200 is based on an extract of a fish called Molva dypterygia or Garum Armoricum, found in deep waters off the Armorican peninsula of Brittany. The extract was apparently used by the ancient Celts, by Irish and by the ancient Romans as a food supplement to improve resilience to physical and emotional stress.

The manufacturer has been in the dietary supplements industry for more than thirty years and claims to provide highest quality, most hypoallergenic and most cutting-edge nutritional supplements. Nutricology manufactures more than 200 condition targeted products. The company operas a GMP certified facility in Alameda, California, U.S.A and uses certified independent analytical laboratories to test raw materials as well as finished products.

Stabilium 200 is addressed to adults only.

Stabilium 200 is based on an extract of the fish called Garum Armoricum. The extract works to help cope with stress and enhance mood, energy and memory. Stabilium is a dietary supplement composed of Garum Armoricum, sunflower oil and lecithin and is manufactured in France.

There are reports that Stabilium has anti-anxiety properties in asthenic (fatigue) patients who accused severe anxiety symptoms. Stabilium also seems to decrease anxiety in normal, healthy people who experience mild or occasional anxiety, as one study conducted on students revealed. Stabilium has also been shown to benefit those who suffer from chronic stress, depression, insomnia, motivation, concentration and memorizing skills. There are no known side effects associated to Garum extract.

You may also check out nootropics like NootropX if you prefer a more advanced nootropic for focus and overall brain function.

The formula is marketed as based on one main active ingredient which is an extract of the Garum Armoricum fish, also called the Great Bluefish. It is researched as an active ingredient of nutritional supplements formulated for affections like chronic fatigue, stress, insomnia, and anxiety. Garum Armoricum benefits are believed to be the result of the hostile environment in which he lives, deprived of oxygen, in waters with very low temperatures and high pressures, which forced it to develop unique metabolism and survival features (including the increased levels of neuropeptides, fatty acids, and antioxidants that control oxidative stress).

The extract used in the formulation contains a high amount of small peptides that act as hormone precursors or have a similar action to endorphins–substances known to relieve pain, relax, calm and induce a euphoric state. The formula is enriched with essential polyunsaturated fatty acids (derived from alpha-linoleic acid and fish) and an antioxidant compound of Selenium and vitamin E for increased protection against damage caused by free radicals.

For maximum benefits, the Stabilium 200 dose includes four capsules per day within the first 15 days. After this period has passed, the dose should be decreased to 2 or 3 capsules every other day or as directed by the healthcare practitioner. The manufacturer’s suggestion is to take the capsules all at once, on an empty stomach, with water. Side effects are not known.

There are testimonials posted online about Stabilium 200. What is being stated includes the following:

The price for a box of Stabilium 200 is relatively low. However, in the first month, a total of 3 boxes are necessary to comply with the recommended doses, which makes a month’s supply come at a relatively high price. In the following months, the necessary amount decreases and approximately one box and a half are sufficient to cover a month’s dose, which rises to a more affordable price.

Online ordering from the official webpage is possible. The products are distributed all over the world, but shipping charges are disclosed only after completing the order form. The security of all transactions is ensured with the Quick SSL technology. The manufacturer does not seem to offer additional benefits such as a money-back guarantee or free trial period.

The suggested daily dose of Stabilium 200 is four capsules taken all at one time, with water, preferably on an empty stomach. The manufacturer advises that for best results treatment is continued for 15 days, after which 2 or 3 capsules should be taken every other day.

Stabilium 200 is a dietary supplement aimed at enhancing resilience to emotional and physical stress, while also supporting mood, memory, healthy sleep pattern and energy. And while consumer reviews are limited in number, those who did try the formula report good results (sleep and anxiety relief are most commonly mentioned as benefits).

There are no side effects reported so far or observed in the numerous clinical trials that have tested the extract. However, anxiety, stress, depression are not to be treated superficially, as more serious underlying causes can exist. We recommend you refer to a physician for the most appropriate treatment in case you have such symptoms. 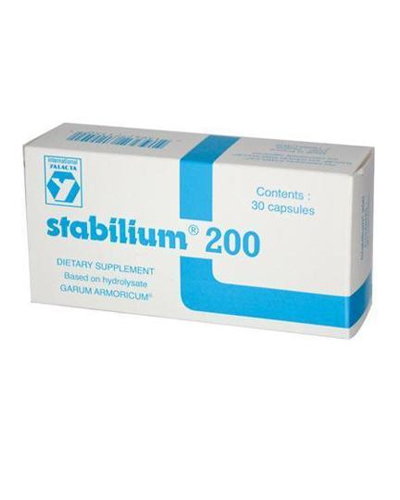 Stabilium 200 presents itself to be a dietary supplement that helps to deal with stressful situations and also improves energy, mood, and sleep patterns. Nutricology is the company that develops and manufactures this product. This formula is a blend of several ingredients that includes Virgin Sunflower Oil or Lecithin, all of them mixed together as to support brain health and emotional health, preventing learning and memory disorders, as well as offering stress relief.

Stabilium 200 is a nutritional supplement offered as a highly effective treatment against some of the most common problems of modern society which is stress and all the related side effects (sleeping problems, depression, anxiety, memory problems, bad mood, etc.). Although the main active ingredient, Garum Armoricum is the subject of intensive research, the supplement offered by Nutricology seems to be the most popular and appreciated brand among users. In fact, it is tough to find another significant competitor product featuring the same active compound. The formula is scientifically researched, which is a significant advantage over most of the nutritional supplements. A large number of testimonials also support the benefits of this formula on the brain and mental health, but this is not the limit.

This worked for me as well. I was teaching days, nights, and weekends and I had a young child and I could feel the stress building. I was actually introduced to this product by another teacher who quit teaching due to the stress and discontentment and it helped me tremendously. I’m actually thinking of going back on it now that I’m older. Even though it is pricey, I felt better after talking it. Wishing health and no type of dementia to everyone out there. 🍎

Title for your comment
Teacher Approved
Have you tried this product?
Yes
Reply
Lawson

I can’t believe the potency of this product, after just a week I now have a perfect night’s sleep.

I suffer from anxiety and depression and while pregnant with my first child I couldn’t take my usual prescription and was really suffering. I called the company and they confirmed that not only is this product safe to take during pregnancy, but it great for pregnant women. I took it and it helped a lot. I didn’t experience any negative side effects.

The best product for depression and anxiety. Will give sexual disfunction issues.

I have been taking Stabilium for 9 months. I take 2 tablets everyday. It has helped me a lot with anxiety and panic attacks. It is pricey. But, it has worked for me.

I started taking Stabilium 3 weeks ago for stress and anxiety, which both have subsided tremendously. However, what I’ve noticed even more than the decrease in stress and anxiety is my mood change. I would normally feel down and not necessarily depressed just not my normal self after taking Stabilium for right around the 2 week mark,my wife asked me what I was taking because I was actually laughing and joking around like I did 20 years ago. When I told her what it was she immediately told me to go back to the doctor to stock up and to never run out. I would like to thank my Dr for recommending Stabilium as apposed to a mind altering drug that could so easily be prescribed. Sincerely, Satisfied Patient