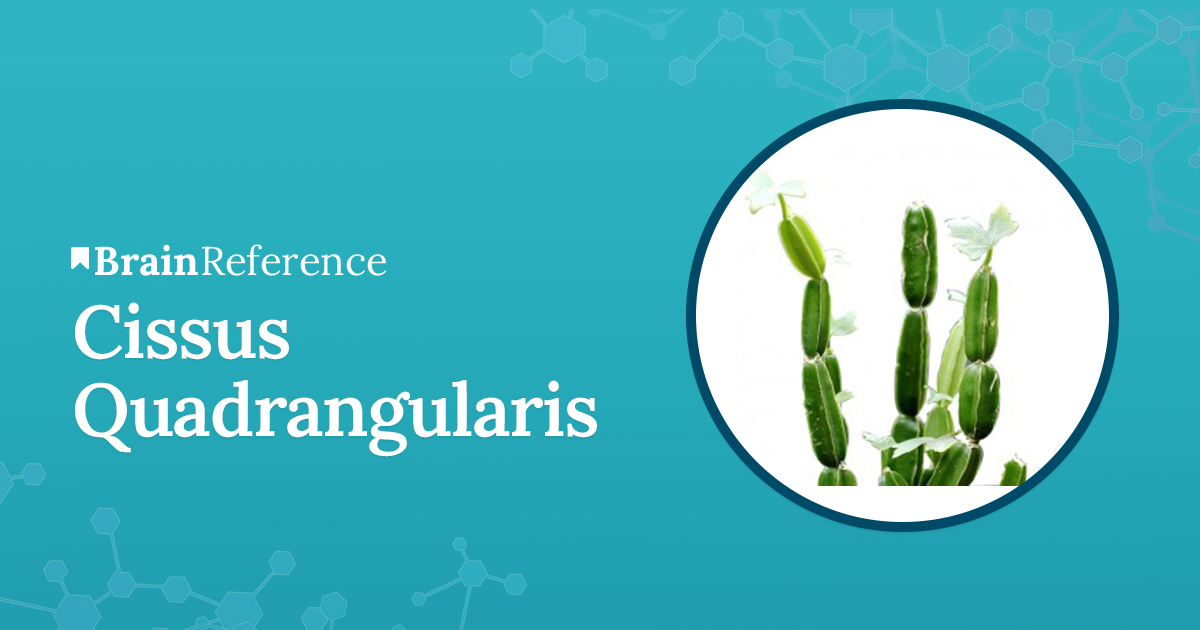 Cissus quadrangularis represents a perennial herb that is a part of the grape family. Other common names by which it’s known are Devil’s Backbone, Veldt Grape, and asthisamharaka. Some evidence suggests that this plant is native to either India or Sri Lanka. However, throughout time, it’s also been introduced to other regions like the United States and Brazil.

The plant can reach a height of 1.5 meters and possesses quadrangular-sectioned branches which have internodes with lengths between eight and ten centimeters and width between 1.2 and 1.5 centimeters. Its leaves are characterized by toothed trilobe, and their width varies from two to five centimeters.

Since antiquity, Cissus quadrangularis has been utilized for medicinal purposes and it’s viewed as an analgesic and tonic in siddha medicine.

Cissus quandrangularis is most commonly utilized for its anti-inflammatory properties which target joint pains relief as well as enhancement of the rate in which fractures are healed. Unfortunately, the evidence found about this plant until recent times is mostly experimental, and the majority of its usages are still under the question mark.

On the other hand, this plant is known for its possessed ability of providing help with broken bones. In fact, there was a study conducted on dogs which proved its healing qualities. The study was conducted using two groups of dogs. While one of the groups received Cissus quadrangularis extracts, the other received a placebo. The research finally concluded that the dogs who received extracts of the plant managed to heal completely in twenty one days as compared to the placebo group which took longer than twenty one days. Furthermore, a similar conclusion was achieved after a study on mice which healed fifty percent faster after the usage of the plant was included.

Another property of Cissus quadrangularis is promoting weight loss when combined with an exercising plan and a healthy died. This claim is supported by some clinical research in which a group of people who consumed this plant as opposed to another that took placebos, observed decreases in blood pressure, triglyceride count and cholesterol. Some scientists believe that the plant may also help enhance muscular mass by supporting fat burn and suppressing appetite for junk food mainly. There was even paper which was published in “World Journal of Gastroenterology,” in the year 2010, which supported the effectiveness and safety of this herb upon weight loss.

Due to the fact that it features high quantities of Vitamin C, this herb may have a positive impact when it comes to inflammation reduction. Some of the symptoms of inflammations are swellings and pains. There is some research that compares the beneficial effects of Cissus quadrangularis to the ones of Ibuprofen and Aspirin. Additionally, the plant may help reduce risks of heart disorders and also prevent some bodily problems linked to weight such as obesity and diabetes. Moreover, it has estrogenic activity which means that it represents a potential research plant for menopause. However, the impact upon male sexuality is yet to be investigated.

When utilized appropriately by adults on short periods, commercial products that feature Cissus quadrangularis appear as safe in the majority of cases. The utilization may vary between six and eight weeks. On the other hand, these remedies may determine a series of side-effects that include intestinal gas, headaches, diarrhea, insomnia, and dry mouth. Although so far there isn’t sufficient information regarding the way in which these unwanted effects appear, it is believed that the reason behind it are the excesses. Due to the lack of research on this area, the plant is often regarded as unsafe on long-term usages. If the treatment is really desired on longer periods, a medical surveillance should be involved in order to avoid potential serious conditions.

Additionally, because of the lack of research, women who are pregnant or nursing are usually advised to think twice before consuming remedies based on Cissus quandrangularis because they might cause harm to the infant. There is currently no information related to possible interactions with prescribed medication, but because it may have an effect upon the levels of blood sugar, people who are taking diabetes medication should consult a personal healthcare prior to the beginning of the treatment. The proper dosage varies and it depends on the age, health, and sex of the individual. People should be aware that an increased dosage as compared to the daily requirements may cause more harm and in order to decide whether the amounts contained by a particular natural supplement, they should consult a personal physician. In case any of the above mentioned side-effects appear or people observe problems during treatment, it is better to immediately interrupt it and continue only after making sure the effects disappeared, there is no allergic reaction implied and the other potential treatments that are being taken alongside don’t interfere with this plant. The usage should be kept mostly on short periods.

Cissus quandrangularis may be found naturally on continents, such as Africa and Asia. However, because of colonists, it has also been introduced to the United States and some European countries. While its natural form is rarely utilized in teas because of the beneficial effects shown, nutritional companies have started to include it as either a main or an additional ingredient in certain remedies that target inflammation reduction and weight-loss in the majority of cases. Although it is not the most popular herb taken by people for treating medical conditions like diabetes or obesity, it sometimes proves positive effects and the study that have been conducted so far show promising results.

The research on inflammation is also supported by some clinical trials, although the patients in these were animals like dogs and rats. Despite the fact that there are some areas in which the herb proved to be beneficial, the evidence found so far is rather inconclusive and a general conclusion can’t be stated upon its effectiveness. Because of this, further scientific studies are needed as well as reports from people who have tried supplements based on it, whether the treatment succeeded or not.