Cataplex A-C represents a dietary supplement released on the nutritional field in 1950 designed to have a positive impact on a large spectrum of bodily areas that include vision, skin and the immunity system. The company which manufactures the supplement is called Standard Process and advertises the supplement as being a reliable support of the hematopoietic system and a natural antioxidant provider.

The company was founded in 1929 and comes with an exhaustive history and positive reputation in this field. The company claims it is constantly improving its manufacturing processes and choice of ingredients in order to properly satisfy current customer requirements. Veterinary Formulas, MediHerb and Standard Process are the three lines of products marketed by the company. The person who initiated the business is called Dr. Royal Lee.

Cataplex A-C is composed of two vitamins and a proprietary blend. Its whole food ingredients were chosen to help boost the immunity system and provide proper maintenance of epithelial tissues. It is recommended for people of all ages as long as the treatment is followed according to the label description.

Promoted as a dietary supplement with a high number of functions in the organism, Cataplex A-C should promote cellular health with particularities in the immune and hematopoietic systems. It was launched on the nutritional field more than sixty years ago and since then has received a lot of good reviews. It features a mixture of a proprietary blend and two of the most popular vitamins, A and C.

As research has discovered, Vitamin C has the ability to enhance the immune response of cells. According to a series of clinical evidences, it is involved in immune system function and response. There are plenty of individuals who consume the nutrient in order to avoid developing the common cold. Additionally, this ingredient enhances Iron absorption from foods and may help the cardiovascular system by preventing the occurrence of clots in arteries and veins.

This means that Cataplex A-C may be a good addition to the diet of people who suffer from high cholesterol or high blood pressure.

3) Does Cataplex A-C Work and it is Safe?

The supplement is designed to support a multitude of bodily functions that range from the immunity system to the health of the epithelial and connective tissues. It is a product destined for everyone who desires a health enhancement from a nutritional supplement.

Its ingredients are presented as carefully chosen and include a series of vitamins, amino acids, and nutrients that are promoted as natural. For example, Vitamin A is needed for the proper functioning and development of certain organs such as skin and eyes, but it also possesses an important role in the maintenance of immunity. Although it can be naturally consumed through some foods like meat, butter, vegetables, whole milk and eggs, the majority of people don’t have sufficient time to prepare a proper diet on a daily basis and have to supplement with nutritional supplements. In the majority of situations, people administrate it because they have a deficiency or suffer from some physical problems that include skin conditions, vision problems or infections.

When taken in quantities that do not exceed ten units per day, this ingredient appears to be safe. However, some studies revealed that exceeding this dosage may determine a risk increase in hip fracture and osteoporosis, particularly in elders. Moreover, long-term use of high amounts of Vitamin A leads to serious side-effects such as mental changes, stomach discomfort, anorexia, mild fever, and nausea. Although it’s not specified by the manufacturer, this treatment shouldn’t be combined with an excessive use of alcohol because it may enhance its harmful effects on the liver.

There are online customer testimonials about Cataplex A-C. What is being reported includes:

This product is provided in bottles containing 90 tablets. The manufacturer recommends a daily usage of two tablets per meal, after meals. Its price is viewed as affordable, specifically when compared to similar products from other companies. People can purchase it either directly from the company’s website or other online or local distributors. Since it’s a company with an extensive background in the nutritional field, there are plenty providers to choose from. However, before deciding, it’s better to review options to determine the best price. Additional discounts and promotions may be offered.

When consumed in doses that lower than 2000 mg per, this nutrient is regarded as safe for most of the people. On the other hand, there are some individuals who may experience a series of side-effects that include headaches, stomach cramps, heartburn and vomiting. For women women are pregnant or lactating, the daily dosage should be somewhere around 1200 mg, otherwise problems may be developed in the newborn.

Advertised as a good nutritional addition to any diet, Cataplex A-C features nutrients that mixed together promise to enhance the immune system. Moreover, other bodily areas such as vision, skin and cellular health should be positively influenced. Most of its ingredients have been researched and the manufacturer states that they all come from a natural source. The fact that the formula has made it more than 60 years since its firs release, its a strong argument to its popularity and effectiveness. A healthcare provider should be consulted prior to use. 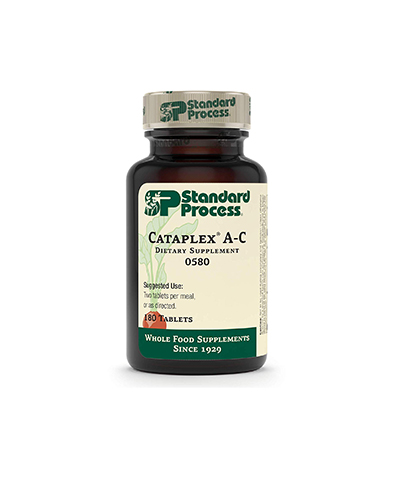 clear
Q:
What are the core ingredients in Cataplex A-C?
A:

Cataplex A-C is a natural remedy which is claimed to display positive impact on the immune system and other bodily areas. The manufacturer of this formula is a company called Standard Process.

This formulation is based on a combination of two well-known vitamins in quantities of approximately 20 to 30% of the daily suggested dosage, per serving. These ingredients, Vitamin A and Vitamin C are important because they improve bone health while also helping fight off free radicals. In addition to these two core ingredients, there are other amino-acids and minerals which are meant to enhance its effects on the long-term. Side-effects are generally noticed if the recommended dosage is massively exceeded, otherwise the formula is safe for use for most adults.

Presented as a dietary supplement with a positive impact on immunity as well as other bodily areas, Cataplex A-C comes from a company with a strong background in nutritional health. It features a combination of two vitamins and a proprietary blend featuring herbal extracts and other nutrients. All its ingredients are presented as having a natural source. Hence minimum side effects should occur. Unfortunately, due to the content of animal traces, the supplement can't be taken by vegetarians and vegans. The dosage should be taken following written label indications or as recommended by a personal healthcare provider.

I love love love it! Great manufacturer and great product! One day I felt like I didn’t have enough vitamin C in my diet so I started taking this. I can totally say that I’ve done one of the best decisions out there!

I think this product is a great addition! It helped me avoid catching colds for more than two years. I totally love it and would recommend it to others without any drawback.