Albizia 1:2 is an herbal supplement based on the extract of Albizia Bark. According to the manufacturing company Standard Process, the core benefits of the product are maintaining a healthy skin and respiratory system, assisting with clear breathing, supporting a normal immune function, and a healthy response to stress and promoting the health of the body’s resistance function.

The product is included in one of the three product lines of the company, particularly the MediHerb Line; this includes a large variety of herbal treatment and prevention solutions. Standard Process also manufactures veterinary formulas and dietary supplements, in a total of more than 300 products manufactured and distributed worldwide. The company Standard Process has been activating on the dietary supplements market for more than 80 years.

The formula is recommended for adult use, however the manufacturer mentions no ailment claims for Albizia 1:2.

Albizia 1:2 contains and extract of the Albizia Bark, one of the most popular Chinese medicinal herbs. The plant is also known as “He huan pi”, the “happiness herb,” or the “collective happiness bark” due to its properties in relieving anxiety, depression and stress symptoms.Particularly, there is evidence which links the use of Albizia to potential benefits regarding anxiety disorders such as social anxiety disorder and obsessive compulsive disorder. The plant has calming and tonic properties and is also recommended as effective against sleep disorder symptoms.

Albizia is commonly used to manage poor memory problems; due to its potential antioxidant activity (there is evidence that seems to indicate Albizia bark has stronger antioxidant activity than vitamin C). The plant has also shown in-vitro anti tumor activity making it a potential treatment against several types of cancer.

Albizia has been used for thousands of years as an antidepressant and anxiolytic herb. No side effects or adverse reactions are known although gastrointestinal irritability may appear when using the herb. Traditional Chinese dose varies between 9 to 15 grams daily, however a positive effect may be obtained with intakes starting from 3 grams daily,

Albizia 1:2 is promoted as a herbal supplement that contains a unique ingredient, Albizia Bark extract. This represents one of most utilized Chinese medicinal herbs since ancient times. Also known under the name of “He huan pi” which means “the plant of happiness” or “the collective bark of happiness,” this herb possesses qualities when it comes to relieving stress, depression and anxiety symptoms. Particularly, there have been some studies conducted on the use of Albizia that links its benefic effects with anxiety disorders like obsessive-compulsive disorder and social anxiety disorders. It’s calming and relaxing properties also recommend it as an effective reliever for the sleep disorder symptoms.

By being commonly used as a poor memory problems manager because of its antioxidant activity, Albizia has been shown to possess stronger antioxidant activity than Vitamin C. also, the herb has also revealed some anti-tumor activity in-vitro, thus making it a possible treatment for some types of cancer. This herbal extract has been utilized for centuries as an anxiolytic and antidepressant herb. Despite the fact that there aren’t any known side-effects related to the usage of Albizia supplementation, gastrointestinal irritability might appear.

Unfortunately, the lack of customer testimonials doesn’t help people make the decision upon this supplement’s efficacy.

Although probably varying from retailer to retailer, Albizia 1:2 is overall an average priced product. Clients may find it for purchase either on manufacturer’s official website or other offline or online retailers.
It is sold in the form of bottles with a content of 200 ml. Suggested daily usage is 5 ml diluted in juice or water, per day, thus one bottle is sufficient for forty days of treatment followed by label description.
The product can be bought at even more affordable prices if large amounts are taken per order. Some retailers also offer discounts and promotions.

The manufacturer recommends 5 ml taken one time per day Albizia 1:2 should not be used during pregnancy and lactation unless directed by a qualified health care professional.

Herbal formulations against depression and anxiety have increased in popularity over the past decades due to their comparatively inexpensive price and to their reduced number of side effects as compared to traditional treatments. Albizia 1:2 is one of these anti-depressive, anxiolytic formulas which research has revealed to have little to no side effects. Its effectiveness is guaranteed by thousands of years of Chinese medicinal use, as well as by some recent scientific research. Consumer reviews referencing the formula however lack, this is why we can’t assess the formula’s actual effectiveness and recommend you talk to a physician before purchasing and starting use. 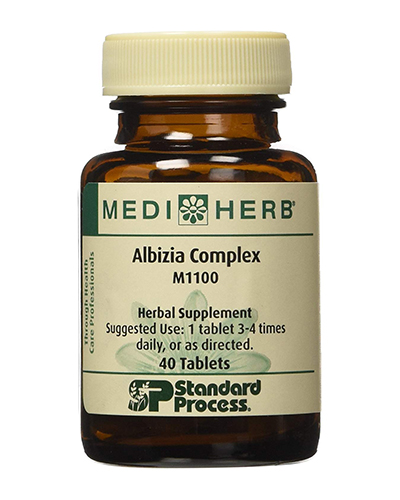 clear
Q:
What are the core ingredients in Albizia 1:2?
A:

Albizia 1:2 represents an herbal formulation based on the extract from Albizia Bark. The manufacturer, Standard Process states that the core beneficial effects of this remedy are assisting with a clear breathing, maintaining a healthy respiratory system as well as promoting the health of the resistance functions in the body and providing a healthy response to stress. This particular combination is recommended for adult usage only, although the manufacturer doesn't mention any ailment claim.

Over the past decades, a formulation based on herbal extracts against anxiety and depression have increased in popularity because of their reduced number of side-effects and comparatively inexpensive prices in comparison with traditional treatments. One of these anti-depressive anxiolytic formulas is Standard Process Abizia 1:2 which has been revealed by research that has little to no side-effects. Thousands of years of Chinese medicine guarantee the efficacy of this formula. Also, some recent scientific studies point out the beneficial qualities of this herb. Unfortunately, the lack of customer testimonials determines the potential client to base its decision only upon manufacturer and label specifications, as well as scientific studies conducted on the only ingredient found in this remedy.

I don’t want to be a brat or something, but this product hasn’t offered me anything. No improvement, no feeling like something has changed, nothing. I’ll give it another shot, but overall it was a big disappointment.