Diaplex is advertised as a dietary supplement that was created to sustain healthy sugar management by providing maintenance to blood sugar levels when mixed with a healthy diet. The company that produces this remedy is known by the name of Standard Process.

This business was founded by Dr. Royal Lee in the year 1929. Located in Milwaukee, it presently sells products worldwide through variety of retailers. With approximately three hundred products, they possess three major lines of production that are Standard Process whole food supplements, MediHerb, and Standard Process Veterinary Formulas. Dr. Lee’s belief system relies on the idea that the provenience of the compound is more important than the amount used in any supplement. Therefore, even a tiny quantity of a properly chosen whole food can have a positive impact.

In order to offer a bioavailable source of nutrients, the components used in Diaplex are derived from green-vegetables. This means that they are delivered in a simple and economical way and the compounds are easily absorbed by the body. Moreover, the producer states that the processes that lead to the finished product have been quality-control and that nutrient-rich plants are washed and properly processed so they preserve their nutritional integrity.

Producers state that the components found in Diaplex work in this combination and sustain healthy functions of the pancreas while also maintaining proper fat and carbohydrate metabolism. More precisely, it contains chromium III and niacin that are two essential compounds of GTF (the abbreviation for Glucose Tolerance Factor), a complex responsible for insulin production. From a general perspective, GTF helps maintain the shape of insulin molecules which makes them effectively transport the glucose in the organism.

Some studies showed that chromium and nicotinic acid interact in a synergistically and help with levels of sugar maintenance. Furthermore, the fat in the body is also in balance, particularly when the supplementation is made in the presence of a healthy diet. In the United States, dietary chromium intake is most of the times half of the suggested minimum intake and this shortfall is bigger due to environmental stressors.

If you find the formula a little too complicated for your blood sugar needs, we recommend checking our TruNature CinSulin Review. It only uses three key ingredients, with cinnamon at the center.

The manufacturer states that the Diaplex ingredients work together to support healthy functions of pancreas while also assisting in proper carbohydrate and fat metabolism. For example, it contains Niacin and Chromium III which are two essential components of GTF also known as Glucose Tolerance Factor, which is a complex directly responsible for insulin function.

Overall, GTF helps with the shape of insulin molecules maintenance which determines them to transport the glucose into the body’s cells efficiently. Some research revealed that nicotinic acid and chromium interact in a synergistic way to help maintain levels of sugar in the organism. Moreover, the fat in the body is also kept under balance, especially when a healthy diet accompanies the supplementation. It is said in the United States that dietary chromium intake is roughly half of the recommended minimum intake and the shortfall is exacerbated by stress factors from the environment. Glandularrs found in Diaplex, such as bovine pancreas Cytosol, bovine liver, bovine pancreas PMG, bovine pituitary PMG extract, bovine adrenal Cytosol extract and bovine liver fat extract allow organs to maintain themselves against the damage done by the free radicals in the body by offering organic-specific proteins.

No significant Diaplex side effects were reported on long-term usage, but considering the fact that it features Vitamin A and Vitamin C, if the daily recommended amounts are exceeded, dizziness, headaches, nausea, or stomach cramps may appear. There are numerous Diaplex reviews that we were able to consult online. What is being reported includes One of the best cleansing products / Works with Type III Diabetes and helps with regulating blood sugar levels.

6) How Much Does Diaplex Cost?

Diaplex can easily be purchased either from the manufacturer’s web page or other online retailers. It is usually found by bottles featuring either 90 or 150 capsules. Overall, its price is considered affordable by people with average paid salaries which can follow the treatment with no problem. However, patients outside the United States can’t order directly from manufacturer website due to the lack of international shipment. Thus they can seek the product on some online retailers where its price may vary. The daily recommended intake is two capsules per meal. Thus a bottle is enough for either one or three months.

The label dosage points out that the daily suggested intake is of two capsules, after meals and with water.

8) Our Final Take On Diaplex

Created in order to balance the sugar levels in the blood, thus helping people that have medical conditions such as diabetes, Diaplex is an affordable product that has no reported side-effects on short-term utilization. Diaplex ingredients include an array of vitamins, glandulars, and minerals that should improve glucose transportation in the blood stream. In order to obtain desired results, it is recommended to follow this treatment in combination with a healthy diet and read the labels accordingly. Specifically, it concentrates on enhancing the GTF levels, thus making sure that proper quantities of insulin are provided to the organism. Vegans and vegetarians can’t use this supplement due to the fact that it features animal extracts. 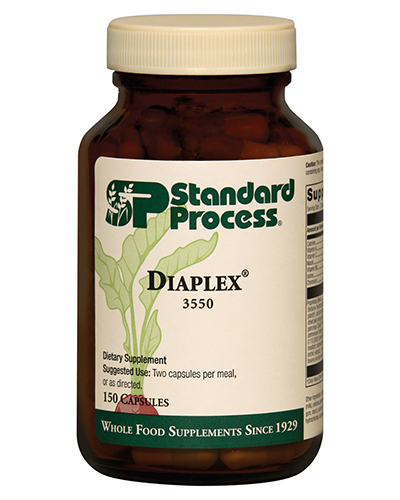 clear
Q:
What are the core ingredients in Diaplex?
A:

Diaplex is presented as a formulation that helps people with medical conditions related to a sugar imbalance such as diabetes. Diaplex features a combination of some vitamins, minerals and a proprietary blend containing animal extracts which are shown to particularly target the cardiovascular and the digestive system. Diaplex benefits include maintaining healthy blood sugar levels and offering support for a healthy gallbladder, pancreas and bowel functions among others.

The company behind this remedy is called Standard Process and enjoys more than eighty years of nutritional experience. Diaplex reviews are generally positive. Unfortunately, vegans and vegetarians can't follow this treatment. Diaplex side effects are not mentioned by the manufacturere nor could we find any complaints from actual consumers.

Q:
Does Diaplex work?
A:

Designed to balance the blood sugar levels and helping people with medical conditions like diabetes, Diaplex is a reasonable priced product with no reported side-effects on short-term usage. It features ingredients like glandulars, vitamins, and minerals that should help enhance the transportation of glucose throughout the blood stream. For obtaining desired results, it is advised to mix this treatment with a healthy diet and follow the labels accordingly. Particularly, it focuses on improving the GTF levels, thus assuring that proper amounts of insulin are offered to the organism. Vegetarians and vegans cannot use this supplement because it contains animal extracts.

I used this with the Blood sugar purification and my sugar levels dropped over 100 pts with changes in my diet to unprocessed foods mixed with organic. Highly recommended.

I would like to know if there is any evidence that diaplex could have a negative effect on my liver? My liver enzymes tests are high and the Dr and are trying to figure out what is causing it. I’ve taken diaplex for 10 years. With the bovine liver in it I’m suspicious.

We couldn’t find anything suggesting that Diaplex could harm the liver. If there are concerns regarding your liver health, please discontinue your Diaplex treatment and talk to your physician.