Chlorophyll Complex is advertised as a dietary supplement that was created to support various bodily systems such as cardiovascular, cognitive, and immune. Released in 1948 on the nutritional field by Standard Process, Chlorophyll Complex also helps people who take it maintain healthy skin and hair.

Standard Process was established in 1929 by Dr. Royal Lee who based the business on his personal nutritional beliefs that rely on the fact that the source of an ingredient is more important than the quantity used in any remedy. Due to this, even small quantities of whole foods can help with symptom alleviation for various conditions or improve the overall well-being of people using it. Nowadays, they sell approximately three hundred products that range from whole food supplements to veterinary formulas.A specific feature of this company is the fact that they don’t disassociate the nutrients into isolated compounds, thus the ingredients have been processed to be offered in a complete and intact way. Moreover, because of their low-temperature and high-vacuum drying techniques, the nutritional potential as well as enzymatic vitality of the product’s components are maintained.

Chlorophyll Complex contains a combination between a proprietary blend that possesses a series of herbal extract and Vitamin A in a form of beta-carotene. Producers state that chewing this remedy is not suggested and can lead to potential unwanted effects.

Chlorophyll is in fact a substance found in all photosynthetic organisms, specifically plants which are green. It is structurally similar to hemoglobin, the oxygen-carrying pigment found in red blood cells of mammals and other vertebrates. In Chlorophyll Complex, the chlorophyll is extracted primarily from a plant called alfalfa.

Alfalfa features saponins that help support the immune and cardiovascular system. Both the fiber and saponins found in alfalfa help maintain normal cholesterol levels in individuals that already have the levels within normal range. Moreover, saponins keep normal immune response. On the other hand, alfalfa also possesses phytoestrogen, thought to maintain normal estrogen levels. In addition, it contains coumestrol and genistein, plant phytoestrogens which have estrogen-like effects in humans. These are thought to have positive results because they mute several effects of estrogen excess while also providing a source of natural estrogen that is beneficial for women after and during menopausal states, thus reducing symptoms of estrogen deficiency.

Chlorophyll represents a substance which is found in all photosynthetic organisms, mainly plants that are green; It is remarkably similar from a structural point of view to hemoglobin which is the oxygen-carrying pigment found in red blood cells of mammals as well as other vertebrates. In Chlorophyll Complex, the chlorophyll is obtained primarily from alfalfa.

Alfalfa contains saponins that directly help with the support of immune as well as cardiovascular system. Both the saponins and fiber found in alfalfa can contribute to maintaining normal cholesterol levels in individuals that already possess equivalent amounts of cholesterol in their system. Furthermore, saponins support normal immune response. However, alfalfa also has phytoestrogen which is thought to help maintain a healthy estrogen level. Additionally, it can contain genistein and coumestrol, plant phytoestrogens that have estrogen-like effects in human bodies. These are believed to have positive results because of they mute various effects of estrogen excess while also offering a source of natural estrogen which is beneficial for women during and after menopausal states, thus reducing symptoms related to estrogen deficiencies.

However, when consuming alfalfa based supplementation, although viewed as possibly safe on short-term usage, when it comes to long-term it is likely unsafe. The seeds or extracts obtained from alfalfa seeds may cause a series of reactions which are similar to an autoimmune disease that goes by the name of Lupus erythematosus.

There are online customer testimonials about Chlorophyll Complex. What is being reported includes the following:

5) What You Need to Know Before Taking Chlorophyll Complex

Chlorophyll Complex can be purchased by people either from Standard Process official website or some other online or local suppliers. People who live outside The United States can’t buy this product directly from the producer because it has no international shipment policy. It comes in the form of pearls. A bottle contains either 60 or 240 pearls and considering the daily suggested dosage of two pearls per meal; a bottle may last either for ten days or forty, depending on the used dosage. One pearl delivers approximately six percent of daily required Vitamin A. There can be discounts and promotions if larger quantities are purchased.

7) How to Take Chlorophyll Complex

However, when taking alfalfa based supplementation, although regarded as possibly safe on short-term, when it comes to long-term utilization it is likely unsafe. The extracts obtained from alfalfa seeds can cause a series of reactions that are similar to an autoimmune disease which is called Lupus erythematosus.

Overall, Chlorophyll Complex is advertised as a dietary supplement which has multiple functions and targets all bodily systems from immune to cardiovascular and cognitive. It features a mixture between a proprietary blend and Vitamin A. Until present times, customer reviews revealed that it is beneficial in enhancing mood, treating constipation and helping animals and people with their allergies. The treatment can be taken by vegetarians and vegans due to the fact that it contains no animal traces. On the other hand, pregnant or lactating women are advised to consult their doctor prior to taking this treatment because it features alfalfa which on long-term utilization can lead to some side-effects similar to Lupus. 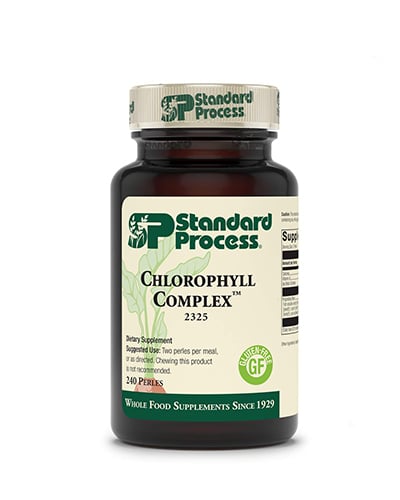 clear
Q:
What are the core ingredients in Chlorophyll Complex?
A:

Q:
What is Chlorophyll Complex supplement?
A:

Chlorophyll Complex is promoted as a dietary supplement with multiple bodily functions. From cardiovascular to immune system, this product has proved reliable for a series of conditions while also maintaining the health of the hair and skin. It was released on the nutritional field in 1972 by Standard Process. Its core ingredient is alfalfa whose side-effects resemble the ones of an autoimmune disease called Lupus. Vegetarians and vegans can follow this treatment too.

All in all, Chlorophyll Complex is presented as a remedy with multiple functions that target all bodily systems from cardiovascular to immune and cognitive. It contains a combination of a proprietary blend and Vitamin A. So far the customer testimonials revealed that it proved beneficial in treating constipation, enhancing mood, and helping people and animals with their allergies. The treatment can be followed by vegans and vegetarians because it features no animal traces. However, pregnant or lactating women should consult their doctor before using this treatment because it has alfalfa which on long-term usage may lead to some side-effects similar to the ones of Lupus.

I have suffered constipation for all my life. This produce is wonderful. My body needed this supplement. I trust Standard Process and would reccomend it for anyone.

I don’t know what it does in the body, but this supplement makes me feel better all around, it seems to stabilize all processes. Everybody should take this. If you do some research, you will find that chlorophyll is a “wonder” supplement.