Valerian Super Calm is a plant based liquid sedative for children. According to the manufacturer Herbs for Kids, the product is able to provide nerve support and soothe hyper energized, agitated children. Additionally, the formula can assist with calming restless children and adults before bedtime, while promoting an easy and restful sleep.

Herbs for Kids is a company established in Arizona, United States specialized in the production of herbal health care formulations for children. The company offers traditional herbal blends that are alcohol-free gentle, safe, and effective, so that children will enjoy them. The product line includes formulations that target various health areas, such as immunity, respiratory health, mood, allergies, etc.

The formula is especially designed for children, although an age limit is not specified. Adults can also use Valerian Calm Supreme, as a general nerve calming solution or to assist with sleep problems.

1) What is Valerian Super Calm?

Valerian Super Calm is an herbal liquid formulation designed to promote relaxation and healthy sleep patterns for children. Some of the herbal ingredients used are certified organically grown and/or ethically wild harvested.

Hops is one of the several herbs included in the formulation. Best known for its sedative effects, the herbs has been compared to the Valerian root in terms of potency. It works to relax the nervous system, hence has been used in stress management treatments, and other anxiety disorders, including obsessive compulsive disorder, social anxiety or social phobia. It is also a popular herbal remedy against restlessness, tension and common sleep disorders such as insomnia. Potential dangers of Hops are rare and include worsening depression in people suffering from this condition.

The Valerian root is one of the most common herbal remedies against nervous system problems. It has been touted for benefits against insomnia, headaches, ADHD, anxiety disorders (panic attacks, post traumatic stress disorder, etc) and stress symptoms. Long term safety of Valerian is not known. When used in high doses, it has been known to cause insomnia, headache, uneasiness or excitability.

Valerian Super Calm is a blend of herbal ingredients in an alcohol-free liquid formulation for children. Valerian root has been used for its medicinal properties for thousands of years. The plant contains certain substances called Valepotriates, which give it its sedative effects. It is prescribed as a sleep aid, although research results are mixed. Other uses include treatment for delirium, inflammation in the joints, PMS (Premenstrual Syndrome), behavioral disorders, anxiety disorders (obsessive-compulsive disorder, social anxiety, generalized anxiety disorder, etc. ), stress management, headaches, ADH, and arthritis. The plant is considered safe for short-term use, whereas long-term effects are not known.

Chamomile is a traditional herbal relief known for its soothing effects. It acts on the central nervous system and reduces feelings of tension and anxiety. It is also used to relieve PMS symptoms, as a digestive aid and as an antiseptic. Side effects are rare and include mild allergies, skin redness and eye irritation have been reported.

The daily dosage depends on the age and weight of children and varies from 1 ml three times a day in case of children aged between 1 and two years old to 3 ml taken 3-4 times a day for children older than 12.

There are testimonials posted online about Valerian Calm Supreme. What is being said includes the following:

If you prefer a calming formula that won’t make you fall asleep, we think you’ll find Calm Now worth a look.

Valerian Super Calm is a liquid formulation found in bottles of 1 and 2 oz. At maximum dose (roughly 9-12 ml a day for children older than 12) the 2 oz bottle should last for maximum six days. At minimum dosage (3 ml a day for children younger than 2) the 2 oz bottle lasts roughly 20 days. A 2-ounce bottle costs $17, which is a rather high price, as a month’s supply cost may consequently vary between $25 (minimum dose) and $85 (maximum dose). The formula is available for purchase on the manufacturer’s website and on numerous other online websites and in retail stores.

Valerian Super Calm is especially designed for children and takes into account the special safety, taste, and composition needs so that the formula is tolerated by children. There is no doubt that children have more energy than grown-ups and the excitement of discovering new things might make them hyperactive and restless. The formula helps parents soothe tattered nerves and facilitates sleep at the end of an agitated day. Valerian Super Calm received positive reviews. Caution is advised when using Valerian, since long term effects are not systematically studied. 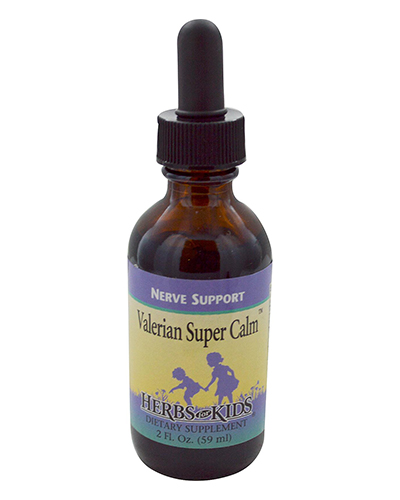 Q:
Valerian Super Calm is all about what?
A:

Valerian Super Calm is a liquid, herbal formulation especially designed to calm the nerves and support healthy sleep for children. The manufacturer Herbs for Kids advertises this as a safe, alcohol-free formula. The main ingredients include Valerian, Chamomile and Hops, ingredients known for their sedative and soothing effects. The herbs have been linked to benefits against insomnia and other sleep disorders, stress management, ADHD, anxiety disorders including panic attacks, generalized anxiety disorder, headaches and inflammation. Valerian Super Calm is suited for children older than 1 year and adults.

Children usually have more energy than adults, and sometimes parents may have a difficult time calming them down to perform the normal daily routine. Valerian Super Calm is offered as a natural, alcohol-free effective solution to calm down children's nerves so that they can perform daily activities. Also, the formula supports healthy, restful sleep. The formula has received numerous positive benefits, leading to the conclusion that it is effective for the majority of consumers. All in all, the main ingredients are safe, however, certain safety concerns exist. It is advised therefore advised you talk to a healthcare provider before using this formula.

My 12 years old daughter loves these. She suffers from panic attacks and I don’t want to put her on traditional meds. Plus these really help.

My son who is Autistic has the worst sleeping patterns. I give him a couple of drops of Valerian Super Calm plus Melatonin every night and he sleeps like a baby. I have not tried this alone, however.

We tried Valerian Super calm for my grandson. He has a Serious nut allergy so we are VERY particular about what we give him. Unfortunately he took it last night (small dose) and has been throwing up all morning. Not a go for sensitive tummies and peanut allergies.We do believe in homeopathic meds but this product did not work for us.