Brain Retain is a nutritional supplement designed to support overall brain function through a potent antioxidant blend. The formula is sold as a Starr Walker product, a line of dietary supplements produced by the company called The 3rd Opinion. The business was started by a licensed PhD in Nutritional Science and a talk-show radio host, dr. Mary Schrick. Dr. Mary decided to start manufacturing her own line of natural remedies after an elaborate research of currently available products.

This particular formula is one of the many such supplements and may be classified as a Nootropic formula. It is advertised to be the result of more than 30 years in the field of neuroscience conducted by a Board-Certified Neurologist called David Perlmutter. The product is promoted as a key component for ensuring optimal cognitive function by improving energy production of brain cells mitochondria and fights against free radicals known to cause severe brain damage in time.

Acetyl-L-Carnitine (ALCAR) is considered a super antioxidant that naturally occurs in the human body and has important benefits on the brain. This is a form of L-Carnitine beneficial due to its qualities of acting as an energy booster for the mitochondria of brain cells while also actin as a precursor for the synthesis of Acetylcholine, an important neurotransmitter that participates in numerous processes throughout the body (including to maintain proper memory function). ALCAR is an amino acid which is a substance used by the body uses to transform fat into energy. Due to the fact that the body can manufacture this substance, it is not considered an essential nutrient. Supplemental Carnitine is however promoted as a way to increase the body’s supply and improve energy production as well as the functioning of several systems. Although this chemical has been researched for a broad range of health issues (heart-related conditions, diabetes, Alzheimer’s disease, high cholesterol, chronic fatigue syndrome, sexual dysfunctions, Down syndrome, etc.) evidence in most of these cases lacks or is very weak so far. However, there are many who support the benefits of this substance and recommend such products as physical and psychical performance enhancers.

ALCAR may influence the action of thyroid hormone, so people with known affections of this organ (particularly with low thyroid levels) should refrain from using ALCAR supplements.

Vitamins B are considered a very important support for the overall health in general, and for the nervous system in particular. Some of the advertised benefits of the B-complex are stress relief, reduced anxiety levels, reduced depression symptoms, optimal memory and heart function, and many others. The B complex of vitamin consists in 8 essential compounds that work both individually (each of them has a predominant role in the body) and as a whole and improve mood and overall energy levels. The benefits of these nutrients in fighting stress and supporting the overall sense of well-being have been clinically shown in a large number of clinical trials and studies. The common side-effects associated with the B-complex are nausea (when taken on an empty stomach) and restlessness (B-vitamins increase neurotransmission).

Alpha Lipoic Acid is also called the “the universal antioxidant,” as it naturally occurs in the human body in almost every type of human cell. It is classified as a fatty acid, a substance needed for proper energy production. The antioxidant benefits are however the ones that have drawn the researcher’s attention. As an antioxidant, ALA is beneficial for a large number of systems, the most important being the cardiovascular and the nervous systems. An important fact is that supporting regeneration and maintenance of other antioxidants (including vitamin E and C and Glutathione) shouldn’t be overlooked. Clinical trials and studies conducted so far have shown that ALA may be beneficial in lowering blood sugar levels in diabetic patients. It is currently being used as a treatment for diabetic peripheral neuropathy. Another important feature of Alpha Lipoic Acid is that this chemical can to cross the blood brain barrier. A large number of clinical trials seem to underline the importance of ALA in preventing and reducing free radicals damage (bone loss, skin aging, neurological problems including Alzheimer’s disease, eye affections including cataracts, etc.), preventing metal poisoning and migraines, supporting a healthy weight, and reduce blood pressure and cholesterol levels.

Phosphatidylserine is a chemical present in the membranes of most cells, but with higher concentrations in the brain cells. Although initially supplemental PS was synthesized from bovine brain, the worries of disease transmission to humans have led to the discontinuing of such supplements. Today, PS supplements are soy-based products with similar advertised benefits in boosting memory and overcoming stress. An important thing to keep in mind is that most of the clinical studies were made on the bovine cortex derived compound and not of the currently used form.
The use of PS supplements is considered likely safe when used in appropriate dosages. PS is however believed to potentiate the effects of blood thinning medication, so patients who are under such treatment should take special precautions when using such a formula.

Two scoops of Brain Retain are recommended to be mixed with 8-12 oz. of water. Brain Retain reviews are lacking at the time of this review.

5) What You Need to Know Before Taking Brain Retain

Brain Retain nutritional formula is sold in bottles that ensure the necessary dose for a half a month. The price per bottle is very high, making a month’s supply ridiculously expensive. The formula can be directly ordered from the official site. International orders are also possible, but the shipping charges are revealed (probably) after completing the ordering form. Shipping charges for US orders are moderate. The company guarantees the safety of all transactions and claims not to store any credit card information that may weaken the security of the site. The formula does not seem to come with a money-back guarantee or a free trial option.

Brain Retain suggested dose is 2 level scoops in 8-12 oz. of cold water. Brain Retain side effects are not indicated by the manufacturer. There are no Brain Retain reviews to support the formulas effectiveness at the moment.

8) Our Final Take On Brain Retain

Brain Retain is one of the many nootropics available on the nutritional supplement market. Its particularity is that it comes in a flavored powdered form that makes it a more pleasant alternative to common dietary supplements sold as capsules or tablets harder to ingest. The great disadvantage of the formula is the monthly price. This is one of the most expensive products of its type but this high price is not supported by any scientific data or by consumers.

There is no evidence or mentioning that the formula has been the subject of a clinical trial. So the main question is why is this formula better than others and is it worth the cost? Unfortunately, we cannot answer this question. Our advice is to consult a healthcare specialist who can give you information about the active ingredients, their benefits and the unwanted effects that might occur from using such a product. 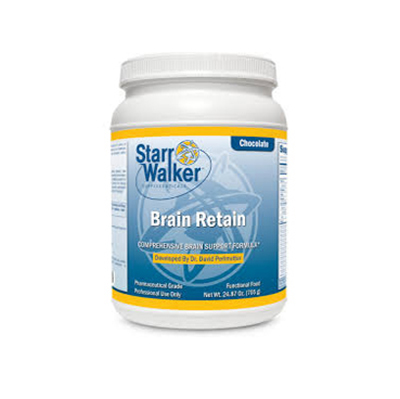 clear
Q:
What does Brain Retain contain?
A:

Q:
What is Brain Retain?
A:

Brain Retain is a powdered brain supplement promoted as a support for overall brain performance, memory enhancer, and proper antioxidant support. The formula is marketed under the brand Starr Walker from The Third Opinion Company.

Brain Retain ingredients are quite numerous and include a diversified range of substances, including amino acids (N-Acetyl-L-Cysteine and Acetyl-L-Carnitine), vitamins (B vitamins, Vitamin C, E, and D3) and minerals (Calcium, Magnesium, and Phosphorus), herbal extracts, and other chemicals believed to be beneficial for the cognitive function. Brain Retain reviews or any clinical research indicating the use of this formula is currently unavailable.

The formula comes in two different flavors: chocolate or vanilla. Although Brain Retain side effects are not indicated it is best to ask your healthcare practitioner about any unwanted reactions or drug interactions before using the supplement

Brain Retain nutritional formula comes in 2 different flavors: chocolate and vanilla. It is also available as a children's supplement. The formula is one of the most expensive brain-boosting products available at the moment. Its active ingredients are indeed researched substances believed to be very effective in enhancing cognitive performance and brain capacity. The high price may come from a large number of active ingredients, including amino acids, which are rather expensive ingredients, and a proprietary blend. However, not many consumers are willing to pay such a price for a product that is not itself clinically proven or even clinically researched.

More so, Brain Retain side effects are not disclosed by the manufacturer. The consumer is advised to consult a healthcare practitioner before purchasing it and make sure that there is no danger in consuming such a supplement.

I decided to try Brain Retain after hearing about it from a colleague of mine who was very satisfied with the results. I purchased a bottle and after two weeks I could definitely see improvements in my memory, concentration, learning capacity and overall alertness. I decided I will buy it again and I recommended the product to everyone who wants a fast solution for improving their mental performance.

Brain Retain price is indeed high, but I think it is worth the money! This delicious drink helps me stay focused and alert every single day. I take it in the mornings and I enjoy its effects the entire day. I really love it!

It was interesting to discover that ALCAR is detrimental to low-thyroid persons, particularly because the manufacturer does not disclose this in descriptive information on the product. I have taken this product and it did seem to be somewhat beneficial, but not according to its high cost.