Brain Booster Plus Review – Is it Effective?

Brain Booster Plus is a supplement for improving clarity, mental balance, focus, and memory, and more. It’s sold by Nature’s Branch, who is located in Deerfield Beach, Florida. They say you can reach your true potential with this supplement, since it can possibly enhance your cognition. The company claims that anyone who has difficulty achieving their goals can be served by a product like Brain Booster, especially busy people. This is supposed to be a potent, pure, professional grade memory enhancer with multiple benefits.

1) Brain Booster Plus at a Glance

Brain Booster Plus has 9 nootropic ingredients in its formula. This includes ginkgo biloba, phosphatidylserine, Huperzine-A, L-Glutamine, and other popular nootropics. DMAE (dimethylaminoethanol bitartrate here). DMAE is an organic compound that may improve memory, mood, energy levels, and add some mental stimulation (without use of stimulants like caffeine). It may help with performance in physical exercise too, when combined with vitamins, minerals, and ginseng. Because of DMAE’s effects on the mind, it’s sometimes called “a mind health compound.” It can work itself into both physical and mental roles, especially since ALCAR (Acetyl-L Carnitine) is present in this product.

2) Details on Brain Booster Plus Ingredients and Uses

3) What Does Brain Booster Plus Do?

The gelatin capsules contain common nootropic ingredients like St. John’s Wort, Bacopa monnieri extract, ginkgo biloba leaf, and vinpocetine. Bacopa, also known as brahmi and Herb of Grace, was once a common ingredient in traditional Indian medicine. It was used for longevity, cognitive enhancement, reducing anxiety, and improving memory. These are all definitely things you want from a nootropic. It’s an antioxidant which enhances the rate at which the nervous system can communicate. It promotes communication and can impact the growth of nerve endings (dendrites) in the brain. Do note that you should take Bacopa supplements with meals. If you take it on an empty stomach, it could cause upset stomach.

The standard dose of bacopa monnieri is 300 mg, depending on a few factors, such as how it’s extracted and if it’s purified. This product contains 100 mg, which is lower than normal, but it also has the desired minimum of 20% bacosides. Taking 1 to 3 capsules of this product daily should provide adequate amounts of most of the ingredients here. Some, like the Huperzine-A, will still be low. A typical dose of Huperzine-A is often between 50 and 200 mcg a day, and this supplement only has 10 mcg per capsule.

5) Precautions of Brain Booster Plus Use

Each bottle lasts for 1 to 2 months if you take the recommended amount, which is 1 to 2 capsules daily. The company has a VIP club where you can get discounts and coupons. They offer package deals as well, where you can get a discount of 10 to 15 percent when buying two or more Nature’s Branch products. Since everything is sold through Amazon, you may get free shipping as well.

Ginkgo biloba is generally regarded as the most ingested herb for brain health. It’s a nootropic and makes frequent appearances in traditional Chinese medicine. Some people have even used it as food; the nuts are popular in China in small amounts. It’s always a popular inclusion in nootropic supplements. Unfortunately this product might not have enough, as the amount clocks in at only 50 mg. Most experts recommend a low dose if your body isn’t familiar with ginkgo biloba, but they often start with 100 to 120 mg. This is the most common dose to assist cognitive function and may be increased as you get used to it. A 50 mg serving could be too weak for some people, but a lower dose is generally considered better than a high dose, especially for people new to nootropics.

Students may be the people best served by this, as it seems to mostly help with focus and general clarity. There are few downsides to considering Brain Booster Plus for yourself or a family member. The one downside is that it’s virtually identical to certain other nootropic supplements. The amounts and ingredients are used in products that seem to work well, though. Brain Booster Plus seems to be an effective nootropic and dietary supplement for increasing cognition, focus, and clarity.

If you prefer a nootropic that won’t wake you up and do the opposite, we recommend Moon Juice Brain Dust. 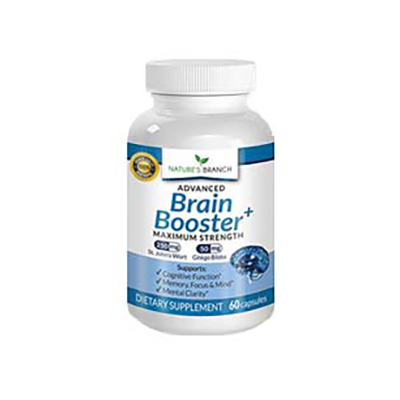 clear
Q:
What's inside Brain Booster Plus formula?
A:

Q:
Are Brain Booster Plus benefits actually a reality?
A:

A couple of people said they didn't feel any effects. This can happen with some supplements, since not everyone's body responds the same way to certain ingredients. It's almost impossible to have a product that works for 100 percent of users. But judging from the amount of positive reviews, Nature's Branch has come fairly close. The draw seems to be that it increases focus and energy levels at the same time, plus suiting a variety of other needs. The inclusion of amino acids is also a big plus. The ability for ingredients to penetrate the blood brain barrier is important for ensuring that your brain gets the nutrients it needs. Some ingredients can also increase blood flow to maintaing proper circulation for health and alertness.