Doxiderol Review – Is it Effective?

Doxiderol is a brain supplement marketed as having three core benefits: it increases mental focus, enhances memory and helps boost energy. The product manufactured by Mentis Laboratories is claimed to be an all natural formulation manufactured in a GMP certified laboratory.Metris Laboratories is a New York based company dedicated to manufacturing all natural supplements designed to help people achieve their goals. The company’s only product is Doxiderol, with no other information being available on production facilities or company background and history.

The supplement contains several ingredients with different work mechanisms on improving memory, energy and concentration. There are ingredients that support neurotransmitter synthesis and functioning, antioxidants, brain blood flow enhancers and stimulants such as caffeine. Doxiderol is designed for healthy adults who seek for a safe way to increase their mental energy, focus and memory.

Doxiderol is a combination of herbs, amino acids and other nutrients in a formulation which is claimed to produce benefits almost immediately (within 15 to 20 minutes of use).Vinpocetine is a chemical compound which resembles a substance found in the Vinca Minor plant. The key benefits of Vinpocetine derive from its peripheral vasodilator ability. Therefore, it has been shown to increase cerebral blood flow and to have neuro-protective properties. It helps support brain functions such as memory and concentration and it activates cerebral metabolism by increasing cerebral synthesis of ATP, known as the universal “currency” of energy.

In terms of medicinal applicability, Vinpocetine has been used as a prescription drug in Europe since 1960 and was prescribed in cerebrovascular disorders, in age-related cognitive impairment treatment, as part of short-term memory loss treatments and to alleviate symptoms of tinnitus. Vinpocetine is generally well tolerated but may cause stomach, pain, sleep disturbances, migraine headache, nausea, dizziness or nervousness.

Acetyl-L-Carnitine is naturally produced in the liver and kidneys, but can also be taken from certain foods such as poultry, fish, dairy products and red meat. Recent evidence shows it may have neuroprotective properties. Acetyl-L-Carnitine may be able to reduce attention deficits in patients with Alzheimer’s disease after long-term treatment, as well as in mild cognitive impairment treatment. One study showed a slower rate of cognitive deterioration (measured as verbal critical abilities and memory) in patients suffering from Alzheimer’s disease who were treated with Acetyl-L-Carnitine. Furthermore, there is research that investigates its potential benefits in Parkinson’s disease treatment.Acetyl-l-carnitine is considered a safe supplement, in doses lower than 3 g/day. Otherwise, mild side-effects may appear, such as vomiting, rashes, diarrhea and a fishy body odor.

Coffee, not just caffeine, can also be used in nootropics like Neora EHT Brain Formula.

3) Is Doxiderol Right for You?

Doxiderol is stated to be an effective form of medication for people trying to improve their mental performance. This formula consists of vitamins, herbal extracts, and amino acids.

There is evidence to support the manufacturer’s claims. The ingredients found in this supplement have been proven to enhance cognitive functions to some extent. Extracts of Vincepotine have been reported to have cerebral blood-flow enhancing and neuroprotective effects. It is marketed as a nootropic for the improvement of memory. It is used in supplements for the purpose of improving brain functions such as concentration and memory by activating cerebral metabolism. Acetyl-L-Carnitine is an amino acid used for a variety of reasons. It plays numerous roles inside the human body, some related to the brain and memory functions. It is used in supplements for mental disorders such as Alzheimer’s disease or Down syndrome. Studies show it can improve memory powers to some extent. Preliminary studies suggest that B vitamins can also improve mental performance.

The recommended dosage is one capsule daily.

Testimonials are posted online about Doxiderol. What is being stated includes the following:

6) How Much Does Doxiderol Cost?

Each bottle of Doxiderol contains 30 capsules, enough for one month’s supply at the recommended dosage. Compared to other similar products we have reviewed, it has excellent value. The average price per capsule makes it an inexpensive supplement.

It can be purchased directly from the manufacturer or other offline or online retailers. The price usually varies between them; some may be offering discounts. Mentis Labs offers a 90-day money back guarantee for unsatisfied customers.

No side effects or special precautions are mentioned by the manufacturer. Reviews generally mention that the formula is effective and report increase in energy, easiness in focusing and provides mental clarity without any dangerous side effects.

Doxiderol is marketed to support memory, energy and focus capacity for healthy people who are going through brain and mental function challenging periods. However, the individual ingredients have been researched for a much wider spectrum of benefits, including in the prevention and treatment of serious neurodegenerative conditions, such as Alzheimer’s disease, Parkinson’s disease and some mild cognitive impairment diseases. Therefore the formula, which received extremely positive consumer reviews, may prove effective in achieving extra benefit for the brain and mental function.

Some ingredients however have been known to cause certain side effects. Also, for many of them research is still undergoing and daily dosages are yet to be established.This is why we recommend you carefully read the label and further research the product as compared to alternatives. 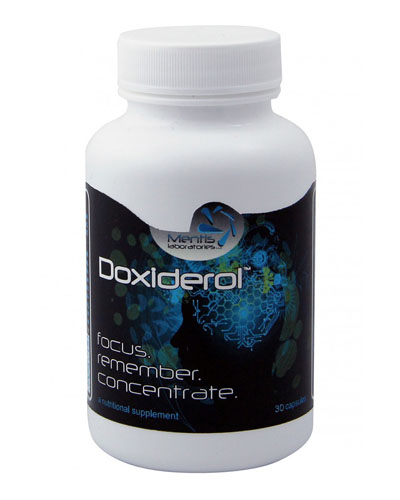 clear
Q:
What are the core ingredients in Doxiderol?
A:

Q:
What is Doxiderol?
A:

Doxiderol is advertised to be an all natural supplement that aims to support general brain function. The company that manufactures this product is Mentis Laboratories, with its headquarters situated in New York, United States. Doxiderol is a formula that blends ingredients such as Vinpocetine, Bacopa, or L-Theanine, in order to act as an aid on multiple levels, including the support of blood flow to the brain or brain cell protection, as well as helping with mental agility, stamina and focus. According to the manufacturer, this formula plays a key role in the prevention of several types of attention disorders, learning, and memory disorders.

Doxiderol may look appealing to those who are familiarized with brain supplements and herbal remedies, especially due to its formulation that contains scientifically proven ingredients. Even if any clinical trials do not support the manufacturer's claims, during our web research, we were able to find a significant amount of positive testimonials about this product.

Overall, this formula seems to be safe and also has excellent value. However, one should always compare products before making a purchase.

I have just started using this product last week, I feel a boost of energy, but no extra focus yet.

Every time I need extra focus for my job, this is the supplement I use, the mental clarity is amazing.

I have been using Doxiderol for around six months and I absolutely love the product. I noticed that you guys did not check off that they offer a trial period. Personally, I would have never even considered ordering Doxiderol if it wasn’t for their trail period. They essentially let you return the bottle and get your money back if you feel like the formula just is not working for you. This made me feel comfortable, safe, and know that the company is trust worthy. I think you should incorporate that policy into this site. Thanks