Neuro Optimizer is advertised as a comprehensive brain supplement designed to support brain health and function.

The manufacturer claims the formula supports brain neurotransmitters and also nourishes and protects the nervous system.

Formulated with seven ingredients, can Neuro Optimizer deliver on its claims for brain health and function?

Read our Neuro Optimizer review to find out.

1) Jarrow Neuro Optimizer at a Glance

2) The Company Behind Jarrow Neuro Optimizer

Jarrow Formulas was founded in 1977 and is currently headquartered in Los Angeles, United States.

Jarrow claims to be dedicated to providing affordable and effective products for the needs of modern men and women.

3) What Are Jarrow Neuro Optimizer Ingredients?

Acetyl L Carnitine (ALCAR) is known for its antioxidant properties. It is also a part of the process that produces acetylcholine, a neurotransmitter that stimulates attention, and short-term memory, and ensures a deep sleep.

Alpha Lipoic Acid or ALA is a fatty acid. The substance is naturally produced and an essential part of every human cell. It plays two important functions; it turns glucose into energy and is a powerful anti-oxidant.

Neuro Optimizer is a blend of amino acids and other nutrients designed to support the health of the brain.

It definitely possesses ingredients known to boost brain health and function, so we’re inclined to think that it does work to a probable degree.

6) Is Jarrow Neuro Optimizer Safe for Everyone?

Not safe for those who have problems taking soy-based products.

7) Precautions of Jarrow Neuro Optimizer Use

8) Where to Buy Jarrow Neuro Optimizer?

Take 4 capsules per day with juice or water between meals or as directed by your qualified healthcare professional.

Neuro Optimizer is strongly advertised as a supplement that contains several high-quality ingredients.

Nevertheless, we advise our readers to research further into this product, its ingredients, and the overall formula before making a final decision.

Overall, the Neuro Optimizer benefits may be real, and the supplement may work to support and enhance cognitive function.

The only question is if you’re willing to pay the premium for its formula, and it’s not exactly cheap. 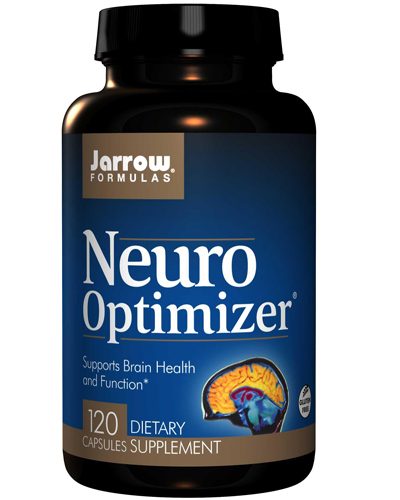 clear
Q:
What does Jarrow Neuro Optimizer contain?
A:

Q:
What is Jarrow Neuro Optimizer supplement?
A:

Q:
What are the Jarrow Neuro Optimizer side effects?
A:

Side effects may appear, although the manufacturer mentions none. This is why we recommend that you seek the advice of a healthcare provider prior to using any dietary supplement, including Neuro Optimizer.

Q:
Where can I buy Jarrow Neuro Optimizer?
A:

Q:
How much does Jarrow Neuro Optimizer cost?
A:

Q:
What are the benefits of Jarrow Neuro Optimizer?
A:

Some report it has been effective in managing stress and pressure, ADHD symptoms, cognitive impairment early symptoms, information retention and recall, memory, reducing anxiety, sleep problems, and many others.

It appears that the formula will deliver on its advertised benefits and accomplish its product.

However, you should be aware that this is a dietary supplement and is not regulated by the FDA.

Q:
How should I take Jarrow Neuro Optimizer
A:

Take 4 capsules per day with juice or water between meals or as directed by your qualified healthcare professional.

Q:
How do I contact Jarrow Neuro Optimizer customer service?
A:

You can contact Jarrow Formulas through their contact form at https://jarrow.com/pages/contact-us, their hotline at (310) 204-6936, or through email at info@jarrow.com.

The company behind Neuro Optimizer is Jarrow Formulas.

I’ve taken a full month of neuro optimizer and I’m not feeling any different i do however have constipation. Has anyone else expierenced it.

I have had very bad neuropathy and could not take RX drug so took neuro optimizer. It has really helped reduce the neuropathy.

I began taking NEURO-OPTIMIZER after a head injury with all the subsequent symptoms of concussion. Headache reduction was almost immediate. Considering the side effects of all the other medications prescribed by the physicians I attended I prefer to have a safer recovery with NEURO-OPTIMIZER.

I suffer from depression and anxiety. After about two weeks, Neuro Optimizer made and incredible difference. I swear by it. Everything effects people differently but this product has changed my life. I have not had any side effects at all.

I was trying to find someone s opinion with depression about this produkt. I take Antidepressiva for ten years. I am taking Neuroptimzer for two weeks and i am a bit schocked. I really dont know how influnced my brain, but…I am feeling very very good. This produkt helps me so much…..Do you still take them Mike, Neuroptimizer. I am happy i saw the comment. That means i am not the only one who can feel the benefit of this produkt….Amasing..#

smelly mucus – I had these side effects from the first pills I took…gaining weight sounds interesting because it supposes to increase the liver’s metabolism, maybe it’s a gender difference here… I feel sleepy instead but the fog and nausea seem to disappear. I must recognize I have overcome psychological problems(timidity inherited by birth!). But I get a lot more often neurasthenic thow…my headaches

this is really a great product , but I have to say that I have experience some side effects to it; some of those side effects are gain weigh, and really bad smelly mucus . that is just me, it may be that it wont be your case…