Beautiful Mind Review – Is it Effective?

Beautiful Mind is a nootropic which, like many, promises to boost your mental performance. It’s specially developed for older people and can improve their memory, focus, and clarity. The company behind this supplement is Essential Stacks, based out of Wyoming. They sell a few formula-based supplements, all of which are well received. Every product is proudly made in the USA, in an FDA registered facility.

1) What is Beautiful Mind?

The label clearly notes that Beautiful Mind contains 9 ingredients and they’re clearly listed on the back, along with their amounts and where they’re from (when applicable). It contains a mix of plant extracts, amino acids, and other things you’d expect to see in a quality supplement.

Ginkgo biloba is always a popular inclusion is nootropic stacks. Unfortunately Beautiful Mind might not have enough, clocking in at only 50 mg. Most experts recommend a low dose if your body isn’t familiar with ginkgo biloba, but they usually start with 100 to 120 mg. This is the most common dose to assist cognitive function and may be increased as you get used to it. So a lower dose is generally considered better than a high dose, at least for people new to nootropics, but 50 mg may not be enough to really unlock your mental potential.

2) What Are Beautiful Mind Ingredients?

3) What Does Beautiful Mind Do?

Capsules contain a formula of 9 ingredients, all of which are supposed to be all-natural. Some of the more familiar ones are ginkgo biloba and St. John’s Wort. People with an interest in nootropics may recognize Acetyl L-Carnitine (ALCAR), a useful amino acid produced in the human body.

One of the unfamiliar ingredients is listed as 2 mg vinpocetine from seeds. Vinpocetine is a semi-synthetic derivative of periwinkle plant extract, specifically Vinca minor. It’s used as medicine, but is essentially a man-made chemical, so it’s hard to imagine how it can come from seeds. It’s thought that Vinpocetine can help ward against things like Alzheimer’s disease. It can increase blood flow in the brain and may protect brain cells against certain kinds of injuries. It can be administered intravenously as part of treating seizure and stroke. Vinpocetine has been researched well enough to come up with studies that say it can improve thinking skills, but better studies are needed. Since it can have side effects like headaches or weakening your immune system, it’s a little unclear if vinpocetine is worth including in supplements. It also doesn’t fit the “all natural” label Essential Stacks sometimes uses.

Beautiful Mind does have good ingredients, though, including amino acids. These are often considered the best part of most supplements because of how they penetrate the blood-brain barrier.

5) Precautions of Beautiful Mind Use

6) How Much Does Beautiful Mind Cost?

Each bottle will last you about a month. The price is around average for this type of supplement, perhaps a bit less depending on where you can find it. Beautiful Mind can be found on Amazon, so you may get free shipping depending on your individual circumstances. It also has a 100% money back guarantee so you can try it without risk.

At the time this review was written, Beautiful Mind was exclusively available on Amazon and undergoing a special sale of more than 50% off.

7) How to Take Beautiful Mind

The ingredient which appears in the largest amount is St. John’s Wort, 250 mg of it, extracted from the yellow flower heads. While, like ginko, this has been used in ancient medicine, its benefits are still undergoing research. It commonly appears in doses of 300 to 900 mg daily, and may alleviate mild depression.

Essential Stacks says their formula has been clinically studied and found to support memory, clarity, and focus. The plant based ingredients have been used for countless years in ancient and modern medicines. Online, Beautiful Mind has been met with nearly universal acclaim, accumulating a large number of positive reviews. Its effects may vary, as every individual is unique, but most people say it’s had a terrific impact on their lives. It doesn’t work for people of all ages and inclinations, as its formula was specially created for people who are 40 or older. But if you’re in the proper age range, this nootropic stack seems to do exactly what it promises. The formula can boost your cognitive performance in more ways than one, and is pleasantly affordable. 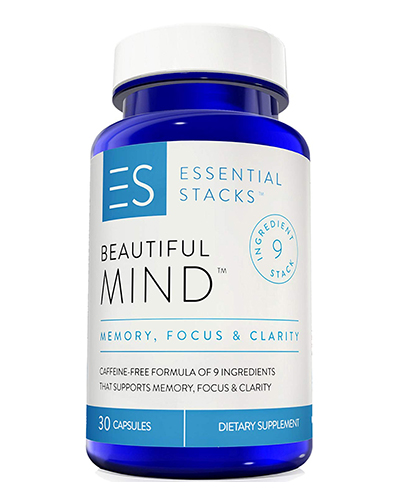 clear
Q:
What does Beautiful Mind contain?
A:

Q:
Are Beautiful Mind benefits actually a reality?
A:

Many supplements don't have a large amount of reviews, but Beautiful Mind does, and they're overwhelmingly positive. There's always some variance with nootropics because of individual biological makeup, though, and this is no exception. One reviewer said they didn't see any improvements, and that they even forgot to take the supplement at times – a clear strike against its claim to boost memory. Other people were much more optimistic. One reviewer reported feeling great results within only a week of taking Beautiful Mind. Overall people seem to enjoy this supplement and don't mention seeing terrible side effects. It looks to be a safe and effective way of improving your mental performance in everyday life.