Spark Canister Review – Is it Effective?

Spark Canister is a new energy formula developed by AdvoCare. This is an American company founded in 1993 and located in Piano, Texas, specialized particularly in weight-loss and sports nutrition supplements. Their list of product also includes a skin care line, as well as other nutritionals for specific health issues affecting modern man.

This particular supplement is part of the “Active” line of formulations and is described as a fast-acting energy booster and mental focus support. The big problem is that the Spark Canister is not listed on AdvoCare’s official web page. The original Spark formula is there, but although it is structurally very similar to the new product, there must be some differences between these products, otherwise why would AdvoCare launch a new one?

From our research we noticed the main difference consists in the serving sizes which are much smaller in the case of Smart Canister, which would mean it is a more concentrated formula. Other reasons for releasing a new product and changing its presentation could be the packaging and transportation issues. Putting a product in a solid canister rather than packing it in individual pouches would make the packaging process much simpler, and the transportation safer.

Spark Canister features a blend of vitamins, minerals, and other chemicals (including some very important amino-acids) that should work together and support mental sharpness and energy levels in a natural manner. In the section bellow we will analyze some of its ingredients and see if the producer’s claims are also supported by scientific and medical evidence.

The list of ingredients starts with several vitamins (A, C, and the B spectrum of vitamins), and continues with several important minerals like Zinc, Copper, and Chromium. These are all substances proven essential for a harmonious development and function of the human body. The next ingredients are those included specifically to give the formula its energy boosting and brain function supporting qualities.

L-Carnitine is one of these substances. It is an amino-acid naturally produced by the body. The chemical is considered particularly important for preventing and reducing the effects of aging and mitochondria dysfunctions. It is believed that L-Carnitine can increase the mitochondria’s ability to burn fat. It is also believed to increase alertness and support the health of neurons. L-Carnitine is used to maintain a healthy cardiovascular system, treat kidney problems, or male infertility. Its implication in energy production has made this substance a very popular ingredient of weight-loss supplements and sports nutrition powders and formulations.

Spark Canister is a multivitamin supplement enriched with several chemicals that act as energy boosters (one of which is the popular Caffeine). Other substances like L-Tyrosine and Choline are important nutrients for the brain that help maintain normal cognitive abilities.

Tyrosine is an amino-acid, substances that are used by the body in the synthesis of proteins. Tyrosine is considered one of the most important amino-acids as it is also a precursor of the neurotransmitters Dopamine, Norepinephrine, and Epinephrine (Adrenaline). Thus, Tyrosine is considered a key nutrient of the brain strictly related to the maintenance of a healthy memory and mood. The chemical is also used by the body in the brain signaling processes. It also supports alertness and focus.

Choline is a vitamin like chemical with a structure similar to that of B vitamins. It is a water-soluble nutrient, which means the excess is eliminated through urine, thus preventing toxicity. Choline also plays an important role in the communication between cells and acts as a precursor of the neurotransmitter Acetylcholine. This neurotransmitter transfers nerve signals from one nerve ending to another, and its importance in stimulating short-term memory is incontestable. Choline is also essential for the production of Phosphatidylcholine, a component of cell membranes that maintains their fluidity and allows nutrient and information exchange.

The effectiveness of Spark Canister formula is not however supported by scientific study or trial evidence. It is the case of most dietary supplements on the market, but the listed ingredients are substances known to be required by our bodies in order to function correctly. The number of consumer testimonials is also relatively high and more importantly favors the product. Satisfied users are talking about amazing energy boosting effects with no unwanted side-effects like jitters or insomnia. The taste also appears to be one of the strong points of the formula.

However, there are less satisfied used who complain about the fact that the formula does not dissolve very fast. We’re not sure if the testimonials are strictly about the Spark Canister or also refer to the original Spark formula. Some reviews claim that the new formula (the Spark Canister) is easily dissoluble, the main issue reveled by users.

5) Precautions of Spark Canister Use

At a standard price of $59.95, the Spark Canister (Fruit Punch) is not a cheap product. One canister contains the equivalent of a month and a half of regular use, according to the manufacturer’s usage recommendations (approximately 42 servings). The product is available online at several retailers. The price varies depending on the retailer but also on the flavor of the formula. For example, the Green Apple Spark Canister is sold on Amazon for $46.61.
There seems to be no free trial or money-back guarantee offered for this formula, so you should be aware that if you are not satisfied with the product, you will probably not recover the money.

Caffeine is also a very popular energizing substance, commonly included in this type of supplements. It is a natural stimulant that derives from numerous plant sources, including coffee, tea leaves, or cacao seeds. It acts directly on the central nervous system and is believed to improve concentration and focus by reducing tiredness. Caffeine consumption has been associated with numerous health benefits including cancer reducing, mood boosting benefits, and long-term memory improvements in adults. Some studies suggest caffeine can protect against type 2 diabetes, lower the risk of Parkinson’s disease and cardiovascular conditions including stroke. Still, the side-effects of excess caffeine intake are not to be ignored. Insomnia, irritability, nervousness, jitters, irregular heartbeat and increased nervousness are just a few of the adverse reactions noted by those who consume more than 5-600 mg of caffeine per day.

The main thing to keep in mind about this formula is that it features vitamins and minerals, which are constantly required by our bodies in order to maintain optimal function. Another important aspect when judging the formula is the presence of amino-acids, substances proven to cross the blood brain barrier (the thin membrane that protects and filters the substances trying to reach the brain). Amino-acids are precursors of neurotransmitters- naturally occurring chemicals responsible for maintaining cognitive capacities like memory, alertness, or focus. Many dietary supplements don’t feature this type of supplements because of the higher costs involved. This might be the reason why Spark Canister is part of the higher priced supplements.

The major negative aspects about the supplement are that is not FDA approved, clinically researched, and it does not come with a money-back guarantee. The manufacturer didn’t even include it in the product on its official web page, and although this may be the next step, at this time we consider it a major downside. 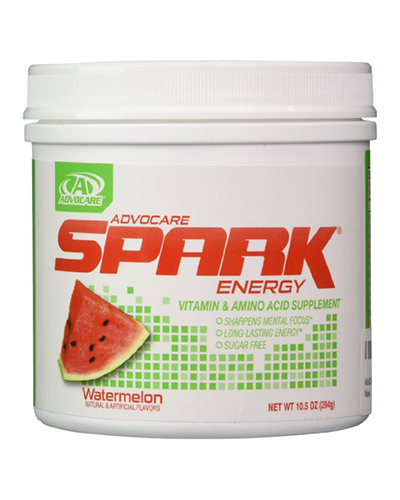 clear
Q:
What does Spark Canister contain?
A:

Q:
Spark Canister is all about what?
A:

Spark Canister is an energy powder advertised to enhance metal energy and focus, fight occasional drowsiness, and provide the appropriate support for a long-lasting energy. The company behind this formula is AdvoCare, an experienced US manufacturer that has been operating for more than 20 years in the sports nutrition and weight-management industry.

Spark Canister comes in various different flavors. The price varies slightly depending on the flavor. Unfortunately the product is not yet available on the official site of the manufacturer, but this may be due to the fact that it is a new product. The original Spark formula is listed on the AdvoCare page and includes very similar ingredients. The major physical difference consists in the packaging while in terms of composition Spark Canister appears to be more concentrated (lower dosage recommended).

Q:
Does Spark Canister work?
A:

Spark Canister appears to be a popular energy drink among consumers of sports-nutrition products. It is a new formulation similar to the original Spark supplement that is also available at this time. The main difference seems to be in the presentation, as the active substances are almost the same. The official formula also provides approximately 42 servings, so we have to ask ourselves why the manufacturer decided to release a new product almost identical to an existing one.

Unfortunately, Spark Canister is not even listed on the official AdvoCare site, so an official point of view is unavailable at this time. One of the reasons we suspect is that the canister is a much easier and economical packaging form. The serving sizes are also significantly reduced, which would indicate that this is a much concentrated formula. The producer also may have taken into consideration the complaints of consumers concerning the slow dissolving and presence of clumps even after the powder had been stirred well for several minutes. Testimonials specifically targeting the Spark Canister product reveal that there's a big improvement in this section.

Still, remember this is not an FDA approved supplement and that the best approach when it comes to such products is to ask a professional's opinion.