Brain & Focus formula is a nutritional supplement offered as a multivitamin and cognitive support for teens and young adults in particular. The manufacturer of this formula is a popular company called Rainbow Light which currently sells a broad spectrum of such formulations for various health problems and issues. The company was founded in 1981 and since then has been working on providing high quality, safe products designed to ensure the well-being of their customers.

Brain & Focus is described as a complete multivitamin, and looking at its label, we tend to agree. No less than 22 vitamins and minerals were included in the formula, probably in the manufacturer’s attempt to create a complex supplement that will fulfill the nutritional requirements of a large part of population.

However, the limit is not set here, as numerous other ingredients have been used for various purposes. For example the Brain Support Blend features several active extracts designed to promote mental clarity. L-Theanine and Choline are also present in order to help achieve and maintain a calm state of mind, and improved focus and concentration without sedation.

The formula comes in a 100% recyclable BPA-free packaging that has a carbon footprint 92% lower than that of virgin plastic. The supplement is also marketed as free of gluten, soy, eggs, milk, nuts, yeast, fish, or shellfish. Moreover, this is a sugar-free, lactose-free and 100 % natural product that lacks artificial colors, flavors, preservatives, sweeteners, or additives.

1) What is Rainbow Light Brain and Focus?

The list of ingredients featured by Rainbow Light’s supplement is impressing. However, we are not convinced that so many substances mixed together in an untested product represent the best solution for anyone.

The first ingredients on the label are common vitamins and minerals which are indeed essential for humans in order to function properly. However, we didn’t understand why some of the amounts used are so much higher than the daily recommended values. For example each tablet supplies 22.5 mg of vitamin B2 while the recommended daily intake is around 1-1.3 mg in adults. Although Riboflavin is considered likely safe, such a high dose is not scientifically proven as safe. Some of the most common side-effects of Vitamin B2 toxicity include orange-tinted urine, eye damage, and itching and numbing sensations.

And there are several other vitamins, particularly from the B complex found in much higher quantities than those recommended. The company doesn’t motivate the decision to exceed these recommended limits.

The first thing that draws our attention is the large number of active ingredients in this formula. The first 22 ingredients are major vitamins and minerals needed by our bodies to function optimally. Some of these nutrients often lack from our unhealthy diets full of over-processed foods that are unable to provide proper nutrient amounts. So many individuals turn to multivitamin supplements (sometimes even at their doctor’s recommendation) as a solution to supply essential substances to their bodies. Still, the natural sources are always preferable to the synthetic compounds usually found in these nutritional supplements.

After the long list of vitamins and minerals, the manufacturer lists Inositol, Choline, and Spirulina.

Inositol, considered a pseudo-vitamin related to the B complex of vitamins, is an important nutrient for the brain where it facilitates inter-neuronal communication. Inositol is also required by major neurotransmitters like Dopamine, GABA, Serotonin, and Norepinephrine to fulfill their roles. Without proper levels of this chemical, none of the above neurotransmitters are able to send their messages throughout the brain. Inositol is usually recommended to promote healthy emotional balance and treat common mood disorders like anxiety, panic attacks, depression, bulimia, Obsessive Compulsive Disorder, and others.

Choline is another chemical similar to B vitamins, important for its role in the synthesis of an important neurotransmitter related to memory and alertness called Acetylcholine. Choline is also a crucial element for maintaining healthy cell membranes.

Spirulina is a type of blue-green algae classified by nutritionists and scientists as a superfood. The amount and diversity of nutrients present in this small one-celled organism is huge and this is the reason why it is considered an important source of antioxidants, protein, minerals, and vitamins. Spirulina is currently recommended in the treatment of high cholesterol, immune system problems, inflammatory conditions, high blood pressure, or anemia.

The price of Brain & Focus listed on the official site is $31.99. One bottle contains 90 tablets, so at a suggested dosage of 1-3 capsules per day, you will get the equivalent of 1-3 months. We believe the price is reasonable even for those who will take the maximum dosage. The manufacturer offers the possibility of purchasing a 3-Pack, but the discount is insignificant. However, we found the formula at half the price on another online retailer’s site, so be careful before choosing where you buy it from.

Other ingredients in this formula include the herbal extracts Ginkgo Biloba, Ginseng, Rhodiola, and Bacopa Monnieri. These are popular substances usually present in brain supplements and often recommended as natural ways to promote optimal memory, focus, and mental balance. Research involving each of them is abundant but inconclusive in regards of their effectiveness.

While Brain & Focus may seem like a complex product, it is our general belief that sometimes less is more in regards of a formula’s active substances. In fact we think that because too many ingredients were included they can either interact with each other (causing harmful side effects), or cancel each other’s effect. This product may as well have been simply a multivitamin able to provide potent dose of nutrients, while the cognitive enhancing nutrients could have made up another product.

The formula does not seem to be the subject of any clinical trial, and at this time, the consumers’ testimonials are not enough to draw a final conclusion. However we should keep in mind that this is advertised as an 100% natural supplement and that it is produced by a very experienced manufacturer. 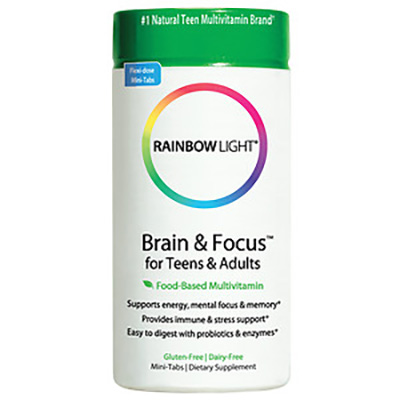 Customers Questions and Answers with Rainbow Light Brain and Focus

Q:
What is Rainbow Light Brain and Focus?
A:

Brain & Focus is a multivitamin supplement offered by Rainbow Light. The formula is specifically targeted towards young adults and adolescents above 13 years old, but we see no reason why any adult person cannot benefit from it. The supplement contains a very large number of ingredients. First thereâ€™s the multivitamin and multimineral blend which provides high amounts of almost each substance, some of them up to 20 times higher than the normal limit. Please ask your doctor if some of these quantities may become an issue, and if Brain & Focus suits your individual needs.

The product also features a Digestive blend, a Brain Support blend, and a vegetable juice mix. The official price is $32, but you can find it cheaper at other online stores. All the company's products come with a 100% satisfaction guarantee. The formula is not scientifically tested for potency, and the number of testimonials is limited at the time of this review.