Total Focus Review – Is it Effective?

AZOTH Total Focus is advertised as a potent nootropic supplement for “extreme focus, attention, and concentration.”

The key feature of this brain supplement is Zynamite at 200 mg per serving, a patented proprietary mango leaf extract introduced back in May of 2018.

According to AZOTH, Zynamite has been proven to deliver an impressive variety of benefits, including improved energy, alertness, and performance, all without jittery side effects typically associated with the use of stimulants.

Zynamite is an award-winning, patented proprietary Mangifera indica extract. Infusions and decoctions of mango leaves are used extensively in traditional health systems for their multiple benefits.

Before moving on with our AZOTH Total Focus review, let’s see what science says about this patented nootropic ingredient:

2) The Company Behind Total Focus

Total Focus is made by AZOTH LLC, an American company founded by Prady Tewarie in August 2017.

The company has had success with an aggressive marketing strategy claiming to produce some of the “strongest nootropics on the market.” Despite its over-the-top claims, the sales have been skyrocketing; AZOTH LLC is currently selling products in over 38 countries.

Some popular nootropic supplements from this company include:

Caffeine anhydrous is obtained from these plants following a chemical process. During this process, all other components of the plants, along with any water, are removed. The result is a white crystalline powder called caffeine anhydrous (anhydrous means “without water”)[3].

The most popular forms of caffeine anhydrous are powders and pills. However, the FDA recommends[4] avoiding any pure powders. There is a fine line between a safe and unsafe dose, and a small mistake in measurement could result in dangerous adverse effects.

Caffeine anhydrous works in a similar way to caffeine. It’s a sneaky impersonator of another chemical in your brain – a neurotransmitter called adenosine. When adenosine locks on to specific receptors in the brain, it makes you slow down and feel sleepy[5][6][7].

More “scientifically” known as Methylliberine (or tetramethyluric acid), Dynamine is a brand-new stimulant – and, according to some reports, nootropic – supplement that has recently appeared on the market. While most of you have probably never heard of Dynamine (or Methylliberine), it is claimed to offer a long list of advantages.

According to the supplement manufacturers promoting Dynamine, this new stimulant nootropic comes with an incredible array of benefits.

The benefits[8][9] said to be associated with the use of Dynamine include:

The main benefit of Dynamine seems to be that it is much faster acting than other stimulants such as Theacrine while also being much shorter in duration. This makes it ideal for people who need a quick energy and focus boost but who do not want to be kept up all night as they might be with caffeine.

Theacrine is a naturally occurring chemical that is similar to caffeine. It is found in different types of tea and coffee and in the seeds of the Herrania and Theocrama plant species. It is also found in the tea plant Camellia assamica traditionally used to prolong life and cure the common cold.

Preclinical and human clinical research shows[10][11][12][13] TeaCrine® facilitates a wide range of healthy functions while providing an edge in the fiercely competitive and rapidly growing markets of energy, performance, and cognitive achievement. Yet, it’s not a stimulant, and it provides energy without the jitters or crashes.

Zynamite is advertised as a multi-award-winning patented botanical extract that provides benefits beyond those of caffeine.

As a natural and sustainable alternative to caffeine, the premium botanical ingredient has been clinically documented to provide a significant, sustained mental and physical performance boost.

Studies[14][15] have shown that Zynamite activates brain waves in almost identical patterns to caffeine, but using a different mechanism doesn’t cause any of the side effects of caffeine.

While Total Focus is definitely a stimulating nootropic, some users prefer a more stim-free approach to their nootropics. This is particularly important if they already have an alternative caffeine source or if they simply don’t like the “buzz” or side effects associated with caffeine use.

If you prefer a stim-free alternative to Total Focus, give our Brainol Review a read and see if it’s a nootropic you’d like.

AZOTH Total Focus is advertised as a safe-to-use nootropic supplement. However, the formula contains caffeine, which may cause mild to moderate adverse effects in persons sensitive to caffeine and stimulants.

Some AZOTH Total Focus side effects[16][17] may include:

As with all dietary supplements, we recommend caution when taking AZOTH Total Focus if under treatment with prescription medication.

Given the ingredients in AZOTH Total Focus, the nootropic may interact[18][19] with certain prescriptions, including but limited to:

8) Where to Buy Total Focus

AZOTH Total Focus is readily available at many online retailers. The nootropic can be purchased directly from AZOTH’s official website, but it may also be found in other online retailers, including Amazon, Walmart, eBay, and VitaminShoppe.

9) How Much Does Total Focus Cost?

You’re looking at around $60 a month for 30 servings. If you’re after a nootropic that contains more popular ingredients for the same price, we recommend checking out our BrainMD Brain and Memory Power Boost Review

10) How to Take Total Focus

It is also worth mentioning that AZOTH recommends using Total Focus alongside other nootropics produced by the company.

"I have more energy, and I'm definitely more focused and productive when I take this. I started with one pill at a time but started taking two at once, and it's made a big difference. The pills are easy to swallow and don't have much taste to me. You can definitely tell when they kick in." [Read full review]

"Provides a steady stream of mental energy that helps get complex things done quickly and efficiently. It doesn't give you an uncontrollable, jittery type of energy. It works very well for working on deadlines." [Read full review]

"I feel very little effect. I have never felt that kick other reviewers talk about. I tried taking 2 one time and broke out in a cold sweat and felt dizzy. I've stacked it with nootropics, and I'm still taking it, hoping that one day it will magically kick in and do what the other reviewers say." [Read full review]

AZOTH Total Focus is one of those nootropic supplements that has gained much traction since its release. The formula is quite unique and incorporates a few potent ingredients with proven benefits for brain health, attention, focus, alertness, and concentration.

While more expensive than your average brain supplement (it will cost you up to $60 per month), AZOTH Total Focus may be a good choice for those looking for a good nootropic to support and improve their cognitive health. 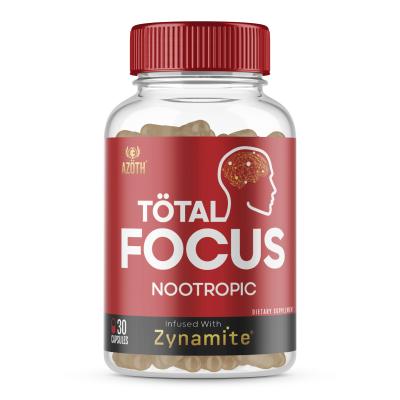 clear
Q:
What are the active ingredients in Total Focus?
A:

AZOTH Total Focus is marketed as a powerful nootropic supplement for "extreme focus, attention, and concentration."

Q:
What are the Total Focus side effects?
A:

AZOTH Total Focus contains caffeine, which may cause mild to moderate adverse effects in individuals sensitive to stimulants. These side effects may include restlessness, shakiness, insomnia, headaches, dizziness, rapid or abnormal heart rhythm, dehydration, and anxiety.

Q:
Where can I buy Total Focus?
A:

AZOTH Total Focus is readily available on a number of internet retailers. AZOTH sells the nootropic directly through its website, but it may also be found in online stores like Amazon, Walmart, eBay, and VitaminShoppe.

Q:
How much does Total Focus cost?
A:

Q:
What are the benefits of Total Focus?
A:

According to AZOTH, Total Focus is specially formulated to deliver an impressive variety of benefits, including improved energy, alertness, and physical performance.

Q:
Does Total Focus work?
A:

Total Focus contains ingredients that have been studied and shown to benefit certain individuals. However, remember that most of these studies are limited to small groups of subjects or sponsored by the same pharmaceutical companies that produce the patented ingredients.

Q:
Can I take Total Focus with a prescription?
A:

Total Focus contains caffeine, an ingredient known to interact with various prescriptions. Therefore, we recommend consulting a medical doctor before taking the nootropic if you are under treatment or have known medical conditions.

Q:
Can I take Total Focus with other supplements?
A:

According to AZOTH, Total Focus works better in conjunction with other nootropic stacks made by the same company.

Q:
Does Total Focus have a recommended daily dosage for children?
A:

AZOTH Total Focus is not intended for children or teenagers under 18.

Q:
Are there any dangerous ingredients in Total Focus?
A:

AZOTH Total Focus doesn't contain any toxic, banned, or potentially dangerous ingredients. The supplement is advertised as safe to use with far fewer side effects than a standard stimulant product.

Q:
How do I know if Total Focus is right for me?
A:

AZOTH Total Focus is intended for those looking for a potent nootropic brain supplement for attention, focus, memory, concentration, and energy.

Q:
Can I take Total Focus if I'm pregnant or nursing?
A:

Q:
How should I take Total Focus
A:

Q:
How do I contact Total Focus customer service?
A:

Q:
Can I return Total Focus?
A:

Total Focus comes with a 30 days money-back guarantee. If you're not happy with your purchase, simply contact AZOTH's customer support and ask for a full refund. You will have to mail back the product at AZOTH LLC, returns, Suite 1609, 1 Franklin Street, Boston MA 02110.

Q:
What are the most common complaints about Total Focus?
A:

Most buyers are happy with the AZOTH Total Focus brain supplement. Still, some consumers complained about the product being too expensive or not noticing any improvements after taking the supplement.

Q:
What do Total Focus reviews say?
A:

AZOTH Total Focus reviews and testimonials on Amazon are positive. The supplement is rated 4.1 out of 5 (1,216 ratings), with 73% of the users rating the product with at least 4 stars.

Q:
Who makes Total Focus?
A:

Total Focus is produced by the American company AZOTH LLC.