NaturaRelief is a supplement manufactured by the company with the same name, which claims it can aid with conditions such as ADD, OCD and depression in a natural way, without the need of prescription medication. Such conditions are considered very serious and can often be caused by stress and anxiety. An increasing amount of people are diagnosed with these disorders every year, and most of them prefer a natural course of treatment, being reluctant of the classic forms of treatment that can induce serious and lasting side effects.

The company NaturaRelief is relatively unknown, and it seems like this is their only product. It is possible that the company is a sub-division of a larger pharmaceutical manufacturer, as there is little information available about NaturaRelief aside from their shipping and return policies.

This product has a 180-day guarantee, time in which you can return the supplement and receive the full cost payed, minus the shipping costs.

NaturaRelief is based on a mixed formulation of ingredients, containing herbs, amino acids and vitamins, combined in a way that is supposed to provide maximum benefits to customers.

Valerian Root and Passion Flower and two often used herbs in supplements that deal with depression and anxiety. They have proven anxiolytic effects and have sometimes been marketed as mild sedatives. Although their efficiency doesn’t match that of prescription medication, it can provide benefits in cases that aren’t considered critical.

The amino-acid complex in NaturaRelief is made from L-Tyrosine and L-Theanine, both substances that have mild effects on mood. L-Tyrosine is known to be helpful for people that are exposed to stressful conditions or situations, while L-Theanine has the added benefit of slightly boosting the immune system.

There is insufficient information for us to say whether this product works as advertised or not, with the manufacturer providing no data regarding tests or research to back up any of their claims.

2) Details on NaturaRelief Ingredients and Uses

3) Is NaturaRelief Right for You?

NaturaRelief is marketed as a product that aims to help people with various disorders through its herbal blend of ingredients. However, this claim can be easily contradicted by certain known facts about some elements that this product contains. For example, the use of Kava Kava in most new food supplements has been proven to cause or make a person more prone to experience side-effects or the most unpleasant nature. Granted, Skullcap has been shown to do quite the opposite, offering consumers a feeling of relief and supplements that contain it, are usually referred to as “feel good” drugs.

More insight on how NaturRelief works is offered on the company’s official website, which states that it works by increasing the levels of all four of the brain’s “feel good” neurotransmitters. It goes on to say that the capsules give an all-natural boost to serotonin, dopamine, norepinephrine, and GABA. The claim is that the ingredients in NaturaRelief keep people balanced so they can concentrate, feel happy and eliminate the compulsive behavior.

We were unable to find scientific studies to back up these claims, but we invite the company to contact us so we can update our editorial with the relevant information. The website states many times that no side effects occur with this supplement. If you want to treat disorders you might feel are taking a toll on your life, it is recommended taking a larger dose, while for prevention, you may only take half.

5) What You Need to Know Before Taking NaturaRelief

Unlike other similar products, you cannot purchase only one bottle of NaturaRelief. You are offered the possibility to buy a minimum of 3 bottles (or more), for a moderate price. These bottles are considered to be 3-month supply.

No side effects have been reported for this product, and it is only considered unsafe for pregnant women, due to lack of testing. The recommended dose is one capsule, twice daily, preferably taken with a meal.

NaturaRelief claims to provide a natural treatment for Depression, ADD and OCD, but fails to prove its claims through medical research and evidence. The only proof they present is the large amount of customer testimonials, all of them claiming that the product alleviated the symptoms of their conditions and greatly reduced stress.

Regardless whether NaturaRelief works or not, the conditions it claims to cure are considered very serious and should not be taken lightly. If you suffer or believe to suffer from any of the aforementioned conditions, it is highly recommended that you consult a medical professional instead of choosing your own course of treatment. 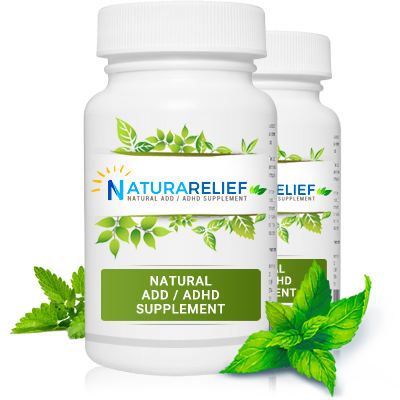 clear
Q:
What are the NaturaRelief ingredients?
A:

Q:
What is NaturaRelief supplement?
A:

NaturaRelief capsules are recommended for patients who suffer from bipolar, obsessive compulsive disorder (OCD), and attention deficit disorder (ADD), as well as other disorders associated with them. This natural brain supplement stimulates the positive neurotransmitters of the brain so that a balance can be maintained. Being natural, the side effects of NaturaRelief are little both on the short term and the long term. Among the NaturaRelief ingredients are Valerian Root, L-Tyrosine, L-Theanine ( Natural Amino Acids), and Selenium (Vitamin).

Q:
Does NaturaRelief work?
A:

Whether or not NaturaRelief is the supplement for you, can still be debated, considering information acquired so far on the product. On the one hand, it's recommended for those that suffer from Bipolar Disorder and Obsessive Compulsive Disorder (or "OCD" for short) because it contains reurotransmitters, on the other we have the company's claim that NaturaRelief will never cause side-effects, even though Kava Kava is known for its potential to have an adverse impact on consumers. If you ever tried this supplement, and are willing to share your thoughts on it, please do so in the comment section below.

Crap product doesn’t work. I’m having a hard time trying to get a refund.

Title for your comment
Steve
Have you tried this product?
Yes
Reply
Phil

You can buy these supplements or nootropics and only take what you need and save money in the long run.

Title for your comment
Make your own
Have you tried this product?
No
Reply
Debbie B

I bought this product for my grandson, whose parents refuse to have tested. Dad has ADHD, and mom is bipolar. Within 30 minutes, my loving, happy grandson returned. Within 4 days, his teacher reported his focus in school was totally different. 2 capsules in the morning, and he’s good all day! I also take them for the day to day anxiety, and they help me sleep!!

Title for your comment
Help for bipolar
Have you tried this product?
Yes
Reply
Nancy

I bought this for my son who is ADHD. He had been on ritalin for several months to help with his schooling. I had hoped to be able to find an alternative remedy for him. This is not it. It actually heightened his symptoms as far as being unsettled, making constant noise and being oppositional. I guess it will be down to individuals, but it was a sad investment for me.

How was the company at handling your refund?

you should try this product instead of Ritalin. Ritalin does definitely have side effects. Go to a health product store and look into cleanses. His liver needs  a toxin cleaning. They are very knowledgeable.

I just ordered this product. Would love to get feedback from persons who have used it. My rating is just based on not using it yet

Have you gotten your product yet, do like it?

Grand daughter 15 takes two at nite with half banana for 3 plus months now for bipolar and ocd- now has bad back pain for over a week- could this be a side effect? Answer soon please!!

Some of the ingredients found in NaturaRelief could cause a range of side effects. Potential side effects of Valerian root include excitability, uneasiness, headache, and insomnia. Passion Flower can cause side effects, including confusion, irregular muscle action and coordination, dizziness, inflamed blood vessels, and altered consciousness. Although Tyrosine is generally well-tolerated even in very high doses, it can still cause some side effects, including nausea, heartburn, headache, fatigue, and joint pain.

We recommend slowly reducing the dose and if the symptoms do not improve, stop administrating NaturaRelief to your daughter and consult her physician immediately.

I’ve been taking it for a couple months now, I’m in my early 20’s and since I was younger I’ve suffered with ocd really bad, it’s more of an on and off feeling when I take it , at times when my anxiety is to much and I can’t focus on just one thing I take it and it calms me , but it’s crazy because it actually weighs out my emotions , not just that but In the mornings when it’s hard to get up and I’m just really tired it helps boost me up but then at night when I need to go to sleep it can be the best relaxer , which tells me it does work it triggers balance inside and to people with ocd and ect that could be everything , I feel like the longer you take it the more you take less like me I started taking 3 a day throughout the day and everything was fine , then I slowly but surely just needed one a day because my
Body got use to the balance , I love it and I had no side effects

hi i’ve been taking naturarelief for well over a year! maybe two? i’ve suffered with anxiety and panic attacks for at least 8 years! when i first started taking naturarelief it totally helped with thoughts spinning around in my head! initially i ate them like candy but in the last year since february, 2011, i hardly take them now! it should be noted that i also supplemented with GABA; iether, normal strengh 100mg or extra strengh 600 mg, and the combination totally helped with my anxiety and panic attacks. I would take both before bedtime; which, helped with sleeping and not waking up at 3 or 4 in the morning with a full blown panic attack! and take both again when i wake up! Again if i would feel an attack coming on. this product does work if you have racing thoughts… it would stop them. at least for me it worked! I’m a 200 pound male in good shape in my late 30’s! Also a chemical technologist! Didn’t want to take man made products to deal with my anxiety and panic attacks. been supplementing with masculine herbal complex by GND, the last month and a half, March to April 2012, and attacks and anxiety have virtually stopped!

Since my grandson has been taking it for about a year we have seen a more attatantive child in his learning concentration and eating. The prescription drugs where making him like a zombie. Tried different kinds. It seemed like his brain was going downhill. Like daaah. So we stopped this made a difference for his HD ADD. We also give him Synaptol .So for us this cobination works wonderfully.