Oceans Kids DHA Chewables is an Omega-3 based formulation for children, designed to support healthy brain functioning and development, as well as to enhance memory, concentration and learning abilities. While the manufacturer Garden of Life does not specifically list the product’s benefit claims, vast research on Omega-3 and its effects on health manage to point out the main health areas which the formula would benefit.The products offered by Garden of Life address a variety of needs and health conditions. The company is located in Florida, United States. The company operates under the GMP (Good Manufacturing Practices) regulation set forth by the FDA.

Oceans Kids DHA Chewables contains 100% arctic cod liver oil and is recommended to children over the age of three.

Oceans Kids DHA Chewables is a blend of Mega-3 and 9 and Vitamin A, D and E.Omega-3 fatty acids play an important role in the development of the brain of children, pre and post natal, in maintaining a healthy cardiovascular function, in supporting mobility and joint, and enhancing cognitive function.

Each of the Omega-3 fatty acids EPA, DHA and ALA play their own unique role in the overall health of the body. DHA for instance is of utmost importance to brain and vision functions, because it is a structural component of both the brain and retina (up to to 93% of the Omega-3 fats in the retina is DHA). EPA appears to be more important to modulating mood and influencing behavior traits. For instance, one study revealed that high levels of EPA produce a significant reduction in depression symptoms in children, as well as of manic eppisodes in children with bipolar disorder.Omega-3 supplementation is able to improve learning skills (as measured by reading, vocabulary acquisition, etc) in children, as several studies seem to indicate. Essential fatty acids deficiencies in children have been associated to ADD, ADHD, autism, emotional problems, impulsivity, anxiety, and sleep problems.

Omega-3 fatty acids may cause the blood to thin; hence precaution is advised in case of children suffering from a blood condition or already under blood thinning medication.

Oceans Kids DHA Chewables is a blend of vitamins, Omega-3s and Omega-9s. It contains Omega-3 fatty acids EPA, DHA and ALA, Oleic Acid (Omega-9 fatty acid) and Vitamins A, D and E. The Omega-3 essential fatty acids DHA, EPA, and ALA, have been the topic of numerous research studies investigating their multiple health benefits, which extend to both adults and children. DHA is of crucial importance for children under two years of age and unborn children because it represents a significant portion of the brain tissue and hence its presence is key to healthy development. DHA helps with healthy vision development and several aspects of cognitive function, such as language and comprehension levels.

EPA becomes more important in the proper development of older children, due to its anti-inflammatory properties and the ability to modulate behavior, mood, and emotion. Children and then adults with low levels of EPA and DHA are exposed to ailments such as ADD, ADHD, depression, autism, childhood diabetes, heart disease, asthma, macular degeneration or atopy.

The manufacturer recommends taking four soft-gels a day. There are testimonials posted online about Oceans Kids DHA Chewables. What is being stated includes:

The formula’s price is moderate (roughly $18), however, comparable to other products with similar ingredients and benefit claims. The formula comes into bottles of 120 soft-gels, which should last no more than one month. You should know that many retailers offer price discounts. Hence it would be advised that you research the market a little before making a purchase.

The manufacturer does not sell directly to consumers. A complete list of the retailer network is available on the manufacturer’s official website.

The manufacturer recommends taking 4 soft-gels of Oceans Kids DHA Chewables every day. Consumer testimonials are generally positive, however some report that the formula’s taste is unpleasant and children refuse to take it on account of the taste.

Oceans Kids DHA Chewables is a formula especially designed to support the growth and development needs of children. The formula particularly offers support to the brain and cognitive function of little ones. The ingredients (Omega-3 EPA, DHA and ALA, Omega-9 OA) are well researched and their benefits are supported by actual scientific evidence. Reviews posted online report the formula works great and is well tolerated by children, with few exceptions from consumers claimimg the taste is unpleasant enough for the formula to be refused by children.

If you’re looking for a B-complex formula for adults, check out our Vitamin Code Raw B-Complex review. 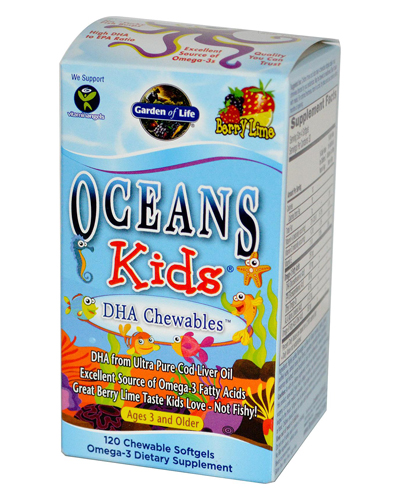 clear
Q:
What are the core ingredients in Oceans Kids DHA Chewables?
A:

Q:
What is Oceans Kids DHA Chewables?
A:

Children dietary needs should be a constant concern of their parents since any imbalance could lead to serious conditions that might affect them far into adulthood. Omega-3s and essential fatty acids should not be absent from children's diets. Supplementation is often a good alternative to ensure their daily intake since the body does not naturally produce Omega-3s. Oceans Kids DHA Chewables advertises a convenient product suited for children; however, consumers report that some of the claims are misleading. Particularly, the taste seems to bother many. However, the big majority agrees this is a good product and successfully give it to their young.

This formula does not taste as advertised, I was disappointed to find out. This is the reason why my son refused to take it, he hated the taste. I think that there are better products out there.