Organic Flax Lignan Oil is an oil extract of flaxseed rich in Omega-3, Omega-6 and Omega-9 essential fatty acids. The manufacturing company Health From The Sun offers little information on the benefits of the formula. According to the company, the formula is certified organic, and uses high purity and potency flaxseed oil which is cold expeller-pressed in a closed environment.

Existing research on Flaxseed oil claims benefits with the immune function, brain health and mental performance as well as joint flexibility. Anybody can benefit from Organic Flax Lignan Oil, as Omega-3, Omega-6 and Omega-9 are essential nutrients to several body organs and functions.

Health From The Sun claims to be a leader in the market for Omega fatty acids products and phytonutrients, although it does not support its claim with clear arguments. The company was founded in 1976 in Massachusetts, United States and enjoys a good reputation among its customers.

Alpha Linolenic Acid (ALA) is an Omega-3 fatty acid found in plants such as canola, flaxseed, and Perilla. The body uses ALA to turn it into EPA and DHA, two other essential Omega-3 fatty acids. Among its most important benefits, scientific studies include lowering cholesterol, and high blood pressure, preventing and treating heart disease and decrease inflammation in people suffering from asthma. Animal studies indicate that ALA deficiencies account for poor memory performance and learning skills, as well as low Serotonin levels. A study conducted on more than 50,000 women published in the American Journal of Clinical Nutrition indicates that an ALA rich diet may help alleviate depression symptoms.

Lignans is a chemical found in plants which bind to estrogen receptors and work to preserve the health of the reproductive system in both men and women. Lignans also have antioxidant effects, helping fight damage cause by oxidative stress.

3) Is Organic Flax Lignan Oil Right for You?

Omega-9 Oleic Acid is the most abundant fatty acid found in nature. Its numerous benefits include memory power enhancement and optimization of neurological transmission and brain function. Omega-3 fatty acids are required for a balanced mood and cognitive functions including learning, concentration, and memory. There is evidence that Omega-3 supplementation may reduce the risk of dementia, Alzheimer’s disease, and other degenerative disorders. Side effects of fatty acids are rare and include abdominal pain, occasional headache, nausea, and loose stools. They also should be used carefully by people suffering from a blood disorder, as they have the ability to thin blood.

The optimum recommended dose is one tablespoon (15 ml) a day.

6) How Much Does Organic Flax Lignan Oil Cost?

Health From The Sun Organic Flax Lignan Oil is a liquid formulation. A month’s supply (roughly 500 ml) costs as much as $18, which is an affordable and fair price, considering the fact that the flaxseed oil is organic and GMO free. The product is available in 8oz and 16oz bottles. The manufacturer does not make public the complete list of its retailers. It does, however, provide a dedicated telephone number on which you can obtain these details.

The recommended daily dosage is one tablespoon (15 ml) a day. No reviews for Organic Flax Lignan Oil are available online.

Flaxseed oil is one of the most potent and popular sources of fatty acids such as Omega-3 and Omega-6. These acids are essential to numerous bodily functions, including the immune system, the cardiovascular function and the brain. Organic Flax Lignan Oil seems to be a high quality product, and uses organic ingredients. The lack of feedback from consumers makes it difficult for us to assess its effectiveness, but with proper consultation from a specialized healthcare professional you could use it and achieve the wanted results. 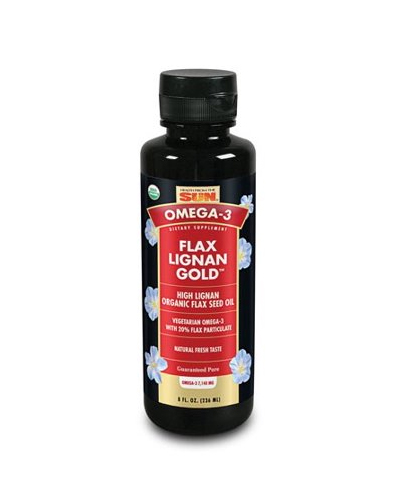 clear
Q:
What does Organic Flax Lignan Oil contain?
A:

Q:
Organic Flax Lignan Oil is all about what?
A:

Health From The Sun Organic Flax Lignan Oil features an organic, GMO-free extract of flaxseed, rich in Omega-3, Omega-6 and Omega-9 fatty acids. The formula is manufactured by an experienced company called Health From The Sun. The main benefits of flaxseed extend to the cardiovascular system, the immune system, joints, brain and mood. Ailments such as PMS, high blood pressure, cholesterol, and cognitive impairment may benefit from flaxseed supplementation. Health From The Sun Organic Flax Lignan Oil contains lignans, plant nutrients with antioxidant effects.

Researchers are more and more interested in how diet and dietary supplements may help prevent and treat certain mood disorders and brain functioning. Flaxseed oil has received a lot of attention in this context lately. Health From The Sun Organic Flax Lignan Oil offers high quality, organic flaxseed extract for some health benefits. The formula seems to be somewhat efficient, although there are no consumer reviews to reference this product. Flaxseed oil and dietary supplements should not replace conventional medical treatment.