Salmon Oil is, as one might expect, a salmon-based fish oil supplement. It has 500 mg of Omega-3 fatty acids and some vitamin E in every serving. This is a product which promotes heart, vision, brain, and joint health. Salmon Oil is manufactured by Carlson Laboratories, a company which was created over fifty years ago in Chicago. They’ve since expanded into the city suburbs, namely Arlington Heights. Carlson Labs offers hundreds of different products, including many fish oils and other supplements for anyone’s nutritional needs.

3) What Does Salmon Oil Do?

This product contains 250 mg of fish oil per capsule, along with 10 IU of vitamin E. The recommended serving size is two capsules daily, giving you a total of 220 mg EPA and 180 mg DHA. Considering how you have to take two capsules for 500 mg of Omega-3s, there isn’t much per pill. Some people may want to take three or even four every day, but you don’t want your vitamin E intake to get too high. One point of contention some people have is that this isn’t 100% salmon oil. It’s closer to 70-75%. Each bottle also contains anchovy, sardine, and mackerel in addition to farm-raised salmon. Carlson does this to boost Omega-3 levels. While salmon is great for Omegas and can have a better taste, other fish have higher concentrations of EPA and DHA.

Carlson Labs says they have a unique process for extracting fish oil, with strict manufacturing techniques to ensure nutrient purity and effectiveness. In general their products are widely known for being of good quality and effective in keeping you healthy.

5) Precautions of Salmon Oil Use

6) How Much Does Salmon Oil Cost?

Each bottle comes in varying amounts. This includes 50, 160, and 300 capsules. The price is relatively low, but because you have to take multiple capsules, each bottle doesn’t last too long. The amounts would also better serve consumers if they came in 60 and 180. That way each bottle would last at least a month before you have to buy another one. One positive is that it’s easy to find Carlson products – they’re online and in many local stores around the United States.

Fish oil is one of the undisputed best enablers of cardiovascular health, as it fights off heart disease and high triglyceride levels. Each body is different so it’s common to see different results. Fish comes with a host of other possible benefits which appear in some people but not others. Fish oil can be taken to help with general mental function and behavior, staving off side effects from prescription medicines, reducing risk of heart failure, and more. Some people report that it helps with symptoms of depression, and it’s been recommended by doctors for people with high cholesterol. No matter who you are, fish oil can help to increase cognition and maintain a healthy cardiovascular system.

We’d like to see more capsules in each bottle, and lower levels of vitamin E, but this is a good product many people will be interested in. It’s best for people desiring a low or moderate boost in their daily intake of Omega-3s. 220 mg of EPA is effective despite not being the strongest levels.

If you’re one of the people who wants at least 300 mg of EPA per serving, this won’t be your first choice unless you’re okay with swallowing three capsules of Salmon Oil a day. But for people seeking a professional grade fish oil, Carlson Labs has other fish oils which would suit your needs better. We do recommend Salmon Oil, and Carlson is always a fine choice for fish oil supplements. 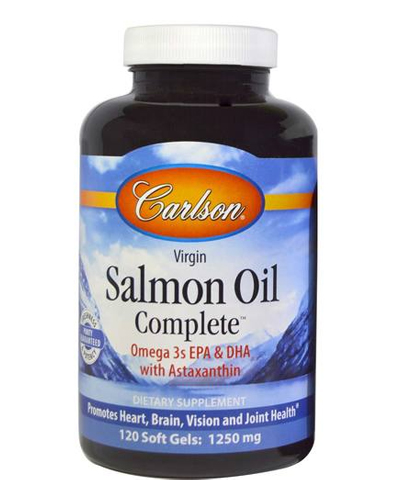 clear
Q:
What are the Salmon Oil ingredients?
A:

Q:
Does Salmon Oil work?
A:

Carlson's products are often tested by IFOS, the International Fish Oil Standards program. They've found that Carlson Labs has consistent quality, with high Omega-3s with low amounts of toxins. It's passed tests for price, purity, and freshness. The short answer is yes, Salmon Oil works! It's almost impossible to go wrong with a fish oil from Carlson Laboratories since they have such a good reputation.

For people who want a lot of Omega-3s to fit into their daily routine, this might not be the first choice. This is more of an entry-level product for anyone that doesn't have a lot of experience with fish oils. If you want a small boost of Omega-3 fatty acids and vitamin E for a subtle helping hand, this would be something to check out.