Krill-Plex Review – Is it Effective?

The benefits offered by the Pure Encapsulation designed formulation are generally supported by existing research on krill oil, although in some cases additional investigation efforts need to be undertaken before formulating a conclusion. They’re also the same company behind UltraNutrient.

The manufacturing company enjoys a strong reputation as one of the leading manufacturers of high quality supplements. It offers a number of condition specific formulas designed to be administrated under the supervision of physicians and other qualified healthcare professionals. This is what sets the company apart from other manufacturers of dietary formulations, who sell directly to the final consumer. The company takes its mission to educate consumers very seriously offering access to a number of educational resources on its website: webinars, brochures, research documentation, etc

Krill-Plex uses a special krill oil in its composition, particularly the trademarked NKO (Neptune Krill Oil) manufactured by Neptune Technologies & Bioresources. The supplement may be used by adults who experience problems in the areas mentioned when listing the benefit claims, at the recommendation of the healthcare provider.

Krill-Plex is extracted from Antarctic Krill oil, one of the purest sources of krill available in the world, free of mercury, heavy metals and other toxins. The extraction process used to create this specific formula is claimed to be a patented extraction process known as Neptune Ocean Extract, which is able to ensure the highest amount of active ingredients.
While krill oil based formulations are numerous, this reviewed here appears to promise superior results due to the extract used and the extraction process from which the active substance result.

Research studies featuring krill oil extract are exponentially increasing in number, with conclusions aiming to show the superior value of Omega-3, phospholipids and Astaxanthin, the three components of krill.

EPA is contained in higher rations than what other fish oil extracted Omega-3 contains. Phospholipids are substances found in the membranes of cells that facilitate nutrient absorption. Because krill is also rich in phospholipids the Omega-3 fatty acids are more available and more stable to be carried into the cells where they are needed. Astaxanthin is known as one of the most potent antioxidants, with benefits against free radicals.

Omega-3 EPA and DHA have been shown to improve heart and circulatory system health, particularly because it has blood thinning and anti-inflammatory properties. These Omega-3 unsaturated fatty acids are able to lower cholesterol, lower blood pressure, decrease tryglicerides, and improve irregular heartbeats. As far as other benefits go, there are studies that show a certain influence of Omega-3 on cognitive and behavioral function (depression, anxiety, memory, learning, focus, etc), joints (arthritis and other inflammatory conditions), menstrual cramps and unpleasant sensations, as well as skin and hair health.

This particular krill oil based brain supplement is quite similar in terms of benefit and claims to many other dietary supplements from competitor companies. So what makes Krill-Plex by Pure Encapsulations special? Well, that is a very good question. We believe that the amount of research conducted by the company, the quality of the ingredients used and the very good reputation of Pure Encapsulation can recommend Krill-Plex as a good buy.

As opposed to other sources of Omega-3 (like fish), krill also features two other important components: a phospholipid complex (that is claimed to enhance the absorption rates of Omega-3) and the potent antioxidant Astaxanthin.

The essential Omega-3 fatty acids EPA and DHA are credited with numerous beneficial effects on human health, and finding them together in brain supplements in quite common. EPA and DHA fatty acids work very well together and numerous studies have linked them with anti-inflammatory properties; hence their direct impact on joint conditions, cardiovascular disease, and other inflammatory process caused conditions.

Because DHA accounts for approximately 97% of the Omega-3 fatty acids naturally found in the human brain and up to 93% of the Omega-3 available in human’s retina, it is particularly important to brain development and vision. DHA is naturally found in breast milk, which further confirms its importance for the natural and optimum development of newborn babies. The benefits of Omega-3 in the early stages of brain development – before birth – should not be neglected, and food or dietary sources of Omega-3 should be included in the day-to-day diet of future mothers.

Research is currently trying to establish a connection between EPA and DHA deficiencies and certain conditions, including depression, schizophrenia, anxiety, and Alzheimer’s disease. While additional data is still required, the early results seem to confirm the importance of these two fatty acids in fighting the above brain conditions.

The suggested dose of Krill-Plex is 2 capsules per day, which should be enough to provide the required 240 mg of Omega-3 fatty acids, 400 mg phospholipids and 0.75 mg Astaxanthin.

Krill-Plex by Pure Encapsulations appears to be a strong contender for some of the top products we have reviewed here. However, the limited number of online testimonials is a bit concerning. We also have to take some points from this brain supplement because of its high price.

Krill-Plex is available in bottles of 60 and 120 capsules. Each capsule contains 500 mg of active ingredients.

The formula is available for purchase directly from the manufacturer’s website, but only by healthcare practitioners, or from various other online affiliates. We noticed that the price does not vary between retailers, which may be the company’s own measure to control actual distribution to direct consumers.

Krill-Plex dose is 2 capsules per day. Reviews from consumers are limited and cannot be used to draw a viable conclusion in the favor or against the formula’s effectiveness.

Krill-Plex is different from other formulations featuring krill as core ingredient in that it is offered only to healthcare professionals, and not to final consumers, in an attempt to minimize potential unwanted effects and to target the treatment where it is needed.

Krill oil is essentially superior to other forms of Omega-3, which greatly contributes to its increasing popularity over the past years. This supplement is available at a rather high price, making its availability to most users limited. In case you are looking for cheaper alternatives, we still advise you to discuss your options with a healthcare provider instead of self administrating.

The number of consumer testimonials is also limited, which is why the effectiveness of Krill-Plex in comparison with other supplements of this sort is impossible to demonstrate. Still, Krill oil research is abundant and you can check out various clinical trials and research studies that confirm most of its benefits to a certain extent. 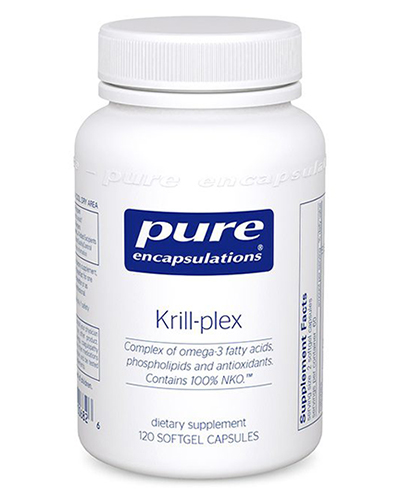 While at a first glance it appears that the formula bears little differentiation from other kill oil extract brain supplements, the fact that the supplement is exclusively available to physicians, its elevated price (above the average at which other formulas can be purchased) and its trademark NKO extract, make this formula no ordinary brain supplement.

The limited number of online testimonials is concerning. We believe that testimonials are key in identifying the strengths and weaknesses of a brain supplement.

According to Pure Encapsulations, and our research has confirmed that, there are some studies and some research that appears to support the benefits of krill oil.

Given all this information, Krill-Plex by Pure Encapsulations might prove to be a good choice for those looking for a strong Omega-3 based supplement.

The drawback or downside to this product is there are not enough consumer reviews to justify the hefty price tag. I have compared it to Schiff MegaRed (side by side) and found there’s not much of a difference except in the price. There’s more reviews for MegaRed than this product. If they lower the cost to be able to enter into the category of a fair chance of being promulgated and compared; then the consumer can make the decision of which one works best. For now, again, because of the hefty price tag; there’s just not enough reviews to justify their price and an accurate review and recommendation by consumers. It’s Schiff MegaRed for me (for now) until their price comes down allowing me to be able to purchase their product and give it a fair and honest review.

Title for your comment
Too Expensive For Consumers to Attain for Honest Reviews
Have you tried this product?
No
Reply
Johnny

Can’t really see the difference between this and lesser brands…