NeuroTone Review – 8 Things You Should Know

NeuroTone is advertised as a unique combination of 11 nutrients known to support the brain’s neurological functions. The company is sold under the Douglas Labs label, a company founded back in the 1950’s by Sam Lioon. The founder wished to provide Americans an opportunity to improve their health through natural, high-quality supplements, as opposed to prescription drugs which were the common treatments back then.

The formula contains several very popular Nootropic ingredients such as Acetyl-L-Carnitine, Phosphatidylserine, Ginkgo Biloba, or Choline, the Omega-3 fatty acid DHA, some natural antidepressants (Ashwagandha Root and Tyrosine) and some not so well-known chemicals such as Eleutherococcus senticosus, or L-Pyroglutamic acid.

Acetyl-L-Carnitine is one of the most common ingredients in modern dietary supplements due to the large number of studies that support its brain enhancing and energy boosting properties. This is one of the several forms of Carnitine, a substance present in all human cells synthesized from the amino-acids lysine and methionine. Carnitine’s main function is to transport fats into the mitochondria which are the energy producing structures of the body. Acetyl-L-Carnitine has a second quality, that of supporting Acetylcholine synthesis, a chief neurotransmitter related to memory, attention, and learning capabilities in humans.

Phosphatidylserine is another very important cell component found in the membrane. The phospholipid acts as a barrier that filters nutrients and allows waste to be eliminated out of the cell. It is also a key substance in cell communication, including communication between neurons.

Tyrosine is a conditional non-essential amino-acid that results from Phenylalanine, another non-essential amino-acid. So Tyrosine synthesis depends on the presence of adequate Phenylalanine levels, and that is why it is considered a conditional amino-acid. Tyrosine’s benefits have also been documented throughout the years. Researchers managed to demonstrate its importance in the synthesis of neurotransmitters like Dopamine, Epinephrine, and Norepinephrine, key substances related to stress coping mechanisms. These neurotransmitters also play crucial functions in the maintenance of mental alertness, normal blood pressure, and optimal hormone levels required for smooth functioning of the entire body. Many human studies involving Tyrosine support its effectiveness in reducing stress, fighting fatigue, regulating blood pressure, preventing age related memory impairment, and promoting emotional well-being.

2) Details on NeuroTone Ingredients and Uses

3) Is NeuroTone Right for You?

NeuroTone is stated to be a natural combination of amino acids, vitamins, herbs, and minerals that allow the mind and the nervous system to have the right nutrients to function better. It is stated that the use of this medication allows them to be protected as well. It is also claimed to stimulate blood circulation to the brain, which in turn leads to a calming effect.

The ingredients found in NeuroTone have been found in other brain supplements that are stated to help improve memory. However, there isn’t sufficient information about any of them to know for sure if they do work for brain enhancement. There is no information offered on the website to explain why they feel this combination of ingredients in this formula have what it takes to successfully help someone to improve the functions of the brain and the nervous system.

NeuroTone, no matter the dose, is to be taken twice a day. It is advised that anyone who is pregnant, nursing or using other medications consults with their doctor before taking this supplement. There are no known side-effects associated with the utilization of this product.

A bottle of 120 tablets of NeuroTone is considered to be either moderately priced or expensive depending on where you purchase it from. A bottle offers enough product to last for a whole month.

Shipping is free on all orders over $100. Otherwise, the cost of dispatch depends on location. After the information is filled in for the order, from the total cost will be recalculated. Most orders of NeuroTone ship within two business days. Overnight and two-day delivery are available for an extra fee.

Pyroglutamic acid is a derivate of Glutamine and Glutamic acid, two important amino-acids for the human health. The L-Pyroglutamic acid form is the one biologically active in humans. Its main benefits derive from its ability to act as a precursor to Acetylcholine, GABA, and Glycine which are key neurotransmitters. Because of these properties, the chemical is most commonly used to support memory, focus, and learning, and reduce anxiety. However, some scientists claim the acid is in fact neurotoxic and interferes with the brain’s energy metabolism. We recommend potential consumers to make a more in-depth research and ask their doctor about the potential side effects of this chemical.

NeuroTone is a complex formula that seems able to effectively support cognitive abilities and prevent age-related memory problems. Most of the ingredients have a long history in the brain supplements industry, and have been the subject of research as potential remedies against various illnesses of the nervous system and the brain. However, the formula itself does not seem to be clinically tested on humans or on animals as a matter of fact. Moreover, the amounts of each ingredient in the formula have not been established as optimal for humans (in fact, there are no recommendations regarding the appropriate daily intakes). More so, the formula’s price is a major factor to take into consideration, as one month’s supply costs around $80. 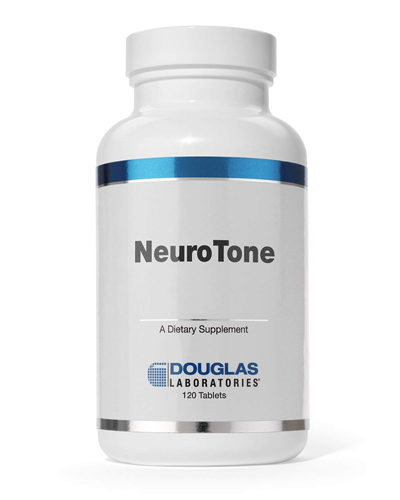 clear
Q:
What are the active ingrediens in NeuroTone?
A:

Q:
What is NeuroTone?
A:

NeuroTone is a supplement manufactured by Douglas Laboratories developed to improve the nervous system function with beneficial effects such as mental alertness and higher concentration. NeuroTone consists of eleven ingredients, among which: L-Glutamine (an amino acid which is converted into L-glutamic acid and gamma amino butyric acid), DMAE (which stimulates acetylcholine synthesis), Ginkgo Biloba (its leafs are beneficial for the arteries and capillaries), Lecithin and DHA.

Q:
Are NeuroTone benefits actually a reality?
A:

NeuroTone does not market itself as a "wonder product," but it simply claims to keep its promise, regarding what it is supposed to offer a user. It offers the body nutrients that enter the blood stream, which then improves blood circulation to the brain, thus improving its capabilities and overall functions. While this theory is plausible, there is no concrete information provided on the validity of the claims, as Douglas Labs does not offer much information on the product or its ingredients.