Did you know that there are products you can use to nourish your brain? Ceralin Forte is a multi-dimensional support formula designed to improve the health of the brain and nerves. Created by a company called Metagenics, it claims to work by providing the body with antioxidant support. With science-backed ingredients like folate and N-Acetylcysteine, the supplement has been advertised as a solution to make yourself neurologically healthy.

Is there any truth to the claims that Ceralin Forte puts forward? Can it be a useful product to try? Let’s find out in this comprehensive Ceralin Forte review.

Ceralin Forte is an organic supplement designed to provide well-rounded support to the central nervous system, including the brain. The formula enclosed in these oral pills claims to protect the body and nerves against oxidative stress, improve circulatory health, and enhance methylation and mitochondrial function for better energy. In addition, the company describes that all ingredients can cross the blood-brain barrier and enter the brain without any trouble to deliver the benefits rapidly and effectively.

Available in the form of oral pills, Ceralin Forte is free from GMOs and gluten. In addition to brain-enhancing ingredients, it features a blend of various vitamins and nutrients that improve overall health.

The company manufacturing Ceralin Forte is based in the U.S and is called Metagenics. Established in Aliso Viejo, California, in 1983 and deals in nutritional supplements, lifestyle programs, and medical foods to help people achieve a good state of health. This company states that they regard quality like no other company and devote significant resources and personnel to test the safety of each ingredient. Each test batch of the formula developed under its label is also checked in different key stages of development.

This business first started out in the United States but now has international status and has opened offices in New Zealand, the Netherlands, Australia, Belgium, and Canada. In 2009, Metagenics was acquired by Alticor Inc. as a subsidiary and currently employs over a thousand people worldwide with a revenue of approximately $330 million per year.

Ceralin Forte includes the following ingredients in its formula:

4) Is Ceralin Forte Right for You?

Ceralin Forte can be considered for daily usage if you

Using Ceralin Forte on a daily basis can lead to the following benefits:

Note that the individual effects may vary from one user to another.

The company manufacturing Ceralin Forte has labeled it as a safe supplement that is not meant to harm the body in any way. However, users have reported experiencing mild gastrointestinal symptoms, such as vomiting, nausea, and abdominal cramps, with its use. In rare cases, it may also cause sleeplessness and seizures.

If any of the symptoms mentioned above occur, discontinue using it and contact a doctor immediately.

Ceralin Forte must not be used if you are pregnant, breastfeeding, or taking antibiotics and nitroglycerin. People with primary or secondary systemic L-carnitine deficiency must also avoid using it unless a doctor clears it for use. Consult a doctor before commencing Ceralin Forte if you have kidney stones or cystinuria.

Ceralin Forte is not suitable for individuals below 18 years. Consider getting advice from a doctor if you intend to use it for long-term use.

8) Where to Buy Ceralin Forte?

Ceralin Forte can be purchased from the company’s official website (metagenics.com). It is also available on Amazon.

10) How to Use Ceralin Forte

The daily dose for Ceralin Forte is 3 capsules per day. The best time to consume it is with a meal, preferably rich in protein. If you are unsure about the dosage, consult a doctor for advice tailored to your circumstances.

Ceralin Forte is a nootropic brain-enhancing supplement formulated with evidence-backed ingredients. The company behind this formula has been in the supplement business for decades and has successfully launched multiple popular products to the masses. Ceralin Forte is one of its top products that has been manufactured after rigorous research and careful compilation of potent ingredients. However, the price is relatively high compared to the competitors and can be considered as the only drawback of this product.

Overall, Ceralin Forte can be considered a daily nootropic supplement if you are able to afford it. 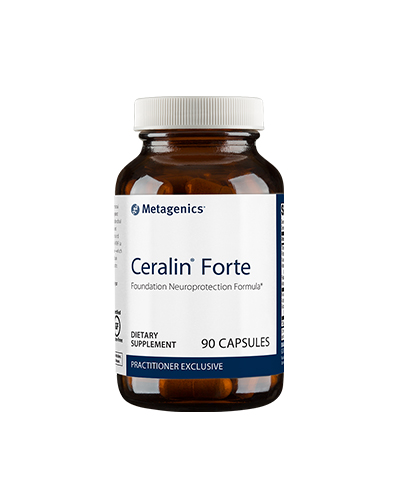 clear
Q:
What are the core ingredients in Ceralin Forte?
A:

Q:
Where can I buy Ceralin Forte?
A:

The best place to purchase Ceralin Forte is its company’s official website (metagenics.com). You can also try Amazon to place an order for this supplement.

Q:
What are the advantages of taking Ceralin Forte?
A:

The top advantages of using Ceralin Forte every day include a boost in mental and physical energy levels, better cognition, sharper focus and concentration, and protection of the brain from damage caused by free radicals and aging.

The company manufacturing Ceralin Forte assures that it includes science-backed ingredients proven to possess cognition-enhancing and neuroprotective properties. So it is highly likely to improve brain health. However, individual results are always subject to variation.

Q:
Does Ceralin Forte have a recommended daily dosage for children?
A:

Ceralin Forte is an adult-only supplement and not suitable for individuals below 18 years.

Q:
Are there any dangerous ingredients in Ceralin Forte?
A:

According to the official website, all Ceralin Forte ingredients are organic and taken from natural sources without any inclusion of chemicals. So they are likely to be safe for use. However, mild side effects like nausea, vomiting, headache, and stomach upset may occur in minor cases.

Q:
Can I take Ceralin Forte if I'm pregnant or nursing?
A:

For safety reasons, pregnant and nursing women are advised not to consume Ceralin Forte.

I was looking for a product that uses a range of B vitamins and I came across this one, although a little expensive it is totally worth it!

This is the first time I used a supplement from this company and I can really say that I am a fan, this product helped me balance all my b vitamins deficiencies and I feel great.