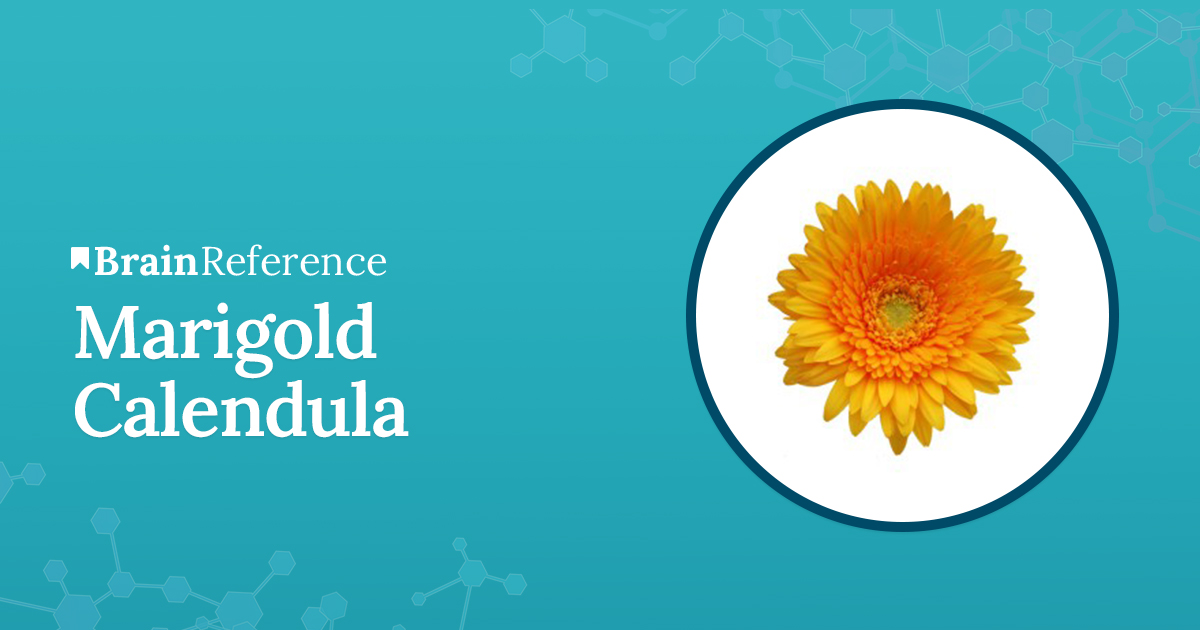 Marigold is a flowering plant that is also commonly known by its genus name Calendula. Its origins are uncertain, but the oldest documented occurrences lie in ancient Greece. It is suggested that in was a plant developed by Greek gardeners and later spread by the romans throughout Europe.

In ancient times was used for both decorative and medical uses. After it spread through the entire world it was generally used to treat wounds and infections. Many of those uses still persist today and the plant has been cultivated in many regions of the world that have a warm climate. Both the flowers and leaves of the plants are considered edible but only the flower parts are commonly eaten. Both play an important role in the supplement industry and therefore the plant is mostly cultivated for its extracts and dehydrated petals.

The most common uses for marigold are in treating various skin lesions and wounds. It has been scientifically proven that marigold has antiviral, anti-genotoxic, and anti-inflammatory properties by several independent studies. Another study has found significant antifungal properties in similar conditions.

To take advantage of these properties the petals are processed and added to lotions that aim at treating various skin problems. It accelerates the healing of cuts, wounds, lacerations, scrapes, scars, and scratches. It is very useful against insect bites because it also destroys germs which are usually associated with them. It is very astringent and stops bleeding effectively, while reducing swelling and irritation. Infections on the skin are also commonly targeted and successfully treated.

Marigold ointment has been suggested by several well-known herbalists in the treatment of varicose veins. It is usually applied two times each day and the improvements should be visible within the first three weeks. It is said that it can even succeed in clearing the veins in question completely. It is also applied regularly on pressures sores to treat them and can even be used preemptively to prevent their formation entirely. It’s also effective in treating all sorts of rashes in all areas of the skin with very little problems and it even removes bruises a lot faster than they naturally decay.

Great effectiveness is also reported from that patience that tried to use it to treat sunburn and first degree burns. Some sties claim efficiency in treating dermatitis or even ear infections, but none of them followed the double-blind formula, so there’s no way of telling if the placebo effect had anything to do with the positive results.

Apart from its external uses, marigold has a significant variety of internal uses too. For example, it is diluted in homeopathic solutions that are prescribed for improving general mood. The concentration of such solutions is very low because the effects of high doses have not been researched.

There are many other claimed internal use benefits but none of these are documented by serious studies. Some claim that it balances the female hormone secretion, relieving painful menstruation and other unpleasant effects like menstrual cramps. It is also said that it can help detoxify the digestive system and heal candida, stomach ulcer, and gastritis. Even benefits to the immune and lymphatic system have been reported. It is very difficult to determine if these claims have any substance, since no studies have tackled the subject and there is significant incentive for manufacturers to spread this kind of stories.

Marigold has sometimes been used as a diuretic and detoxifier of the urinary system. Also, some women have reported that they have successfully used marigold in treating vaginal discharges. This particular use has gathered significant support in recent years despite no scientific evidence. It is currently recommended by many herbalists and most women have either sent positive or neutral feedback.

Many people have reported a good degree of success of treating throat inflammation, tooth aches, and mouth sores with the help of marigold. This is due to the anti-inflammatory properties and the stimulating effect it has on the lymphatic system. In order to accomplish these effects the petals are used in the form of a tea. Uses in treating fever have also been suggested but the claims are not currently considered substantiated.

Like most plant extracts, it is not recommended to be used during pregnancy and while lactating, but you can discuss this aspect further with your physician. He will be able if these restrictions apply in your particular case. External uses are usually permitted with no restriction while internal use is forbidden in order to avoid early deliveries.

In the case of marigold, one important concern is the interaction between the active constituents and other medicine. Also special care is to be given to the hormonal effects it tends to have.

Marigold can be found either in the form of dried petals or included in a vast array of products. On the market it may be marketed as either Marigold or Calendula, but both terms refer to the same plant, namely calendula officinalis. Dried petals are usually used for making tea and ore often mixed with other dried ingredients. It can also be found as a fluid extract mixed with alcohol or as a more potent tincture. In this form it is administered as a few drops three times a day.

Very common are a great assortment of ointments and lotions that have marigold as its main ingredient or as a secondary ingredient in treating certain skin conditions and lesions.

All of these products are available in pharmacies and online stores and they are generally easy to find. Online stores usually offer significant discounts and save you the pain of searching for the product yourself, but also require a certain risk to be taken when choosing where to buy from. Pharmacies that sell them can be more expensive and harder to find, but you get exactly what you pay for.