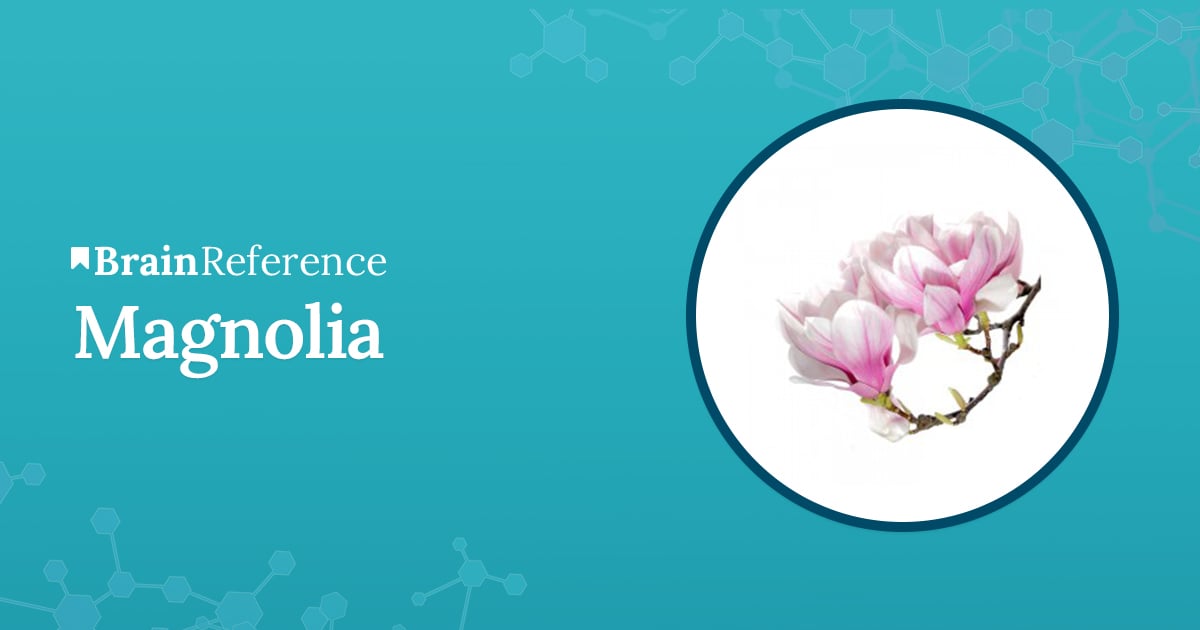 Magnolia is a plant genus that has a large number of species. The one most commonly used in medicine is Houpu Magnolia. Also known by the scientific name magnolia officinalis, it is a flowering tree that grows in the mountain valleys of China. The tree grows up to twenty meters in height and it bears big white flowers with powerful pleasant smells. It has very aromatic bark that is collected and used in traditional Chinese medicine.

Most of the uses of the tree bark rely on two important compounds found in the bark: magnolol and honokiol. It has been shown that these two substances have anti-anxiety effects and inhibit the growth of the blood vessels. They have also been used successfully in treating allergies.

In modern times there are a lot of products that are based of extracts containing magnolol and honokiol. I order to satisfy this high demand magnolia has been cultivated extensively. Now most of the extract comes from cultivated plants and very little from wild ones.

The most well-known active ingredients in magnolia bark are magnolol and honokiol. Scientific studies have confirmed the fact that both compounds act on the GABA receptors in the brain. Because of this fact they can play a key role in relieving anxiety and tension. Each of the substances has these effects on their own, but they also work well together. Therefore, they don’t need to be separated from the extract, which can be used as a basis for treating anxiety and depression. Clinical studies confirm that the effect is real and a significant number of success cases have been reported.

Magnolia bark extract has been marketed used as a weight loss aid in many instances. Despite the claims of the manufacturers, the extract is not known to affect metabolism directly. It can help, but not in the way it is described. It is effective in slowing down additional weight gain in already overweight people and in also fights the anxiety problems that usually plague compulsive eaters or people trying to eat significantly less than they are used. Therefore, it is an indirect aid and is never effective on its own, but it is a good way to start you weight loss treatment.

One area in which the extract is commonly used is respiratory health. Although less supported by clinical studies, many people claim that it has helped them relieve allergies and even better deal with asthma. It is claimed that it helps in decongesting the nasal cavity and sinuses and helps your breathing abilities. Because these illnesses often are accompanied by anxiety problems and nervousness and the extract is effective at fighting those too, it is a very attractive solution for these issues. Also, because of its powerful pleasant smell it is used to combat halitosis. Some even claim antibacterial properties, but that is yet to be proven. What it is proven is the antifungal effect of both active ingredients.

One of the most extensively studied effects of honokiol is its ability to inhibit tumor growth. It is very effective in a wide array of cancers and sometimes even fights tumors that are very drug resistant in normal conditions. It is a potent and very well tolerated remedy that is used today in many instances of cancer treatment. In later years, similar results have been found on a study of the effect of magnolol on prostate cancer cells. While these ingredients have been shown to help fight cancer, the administration techniques can be complicated and for this purpose only a specialized doctor can recommend appropriate action.

Honokiol also has well documented neurotrophic effects. It has been proven through animal studies that it helps the development and functions of neurons and prevents neuron injuries that may otherwise produce heavy damage over time. It is now being studies whether it could be effective in combating chronic neural diseases. Results are still pending but there is great promise in this particular area.

Another recent study conducted in Korea found that the magnolia extract can completely reverse the damage done by Alcoholic Liver Disease. The study was conducted on rats and it is a lot left until it may be determined if it would be effective on humans, but the effect was so extensive that many scientists believe that a human targeted drug based on houpu magnolia extract is on its way in the next decade.

There aren’t many side effects reported when it comes to the bark extract of this plant. The two main active ingredients are not the subject of any suspicions. However, the natural plant extract contains many other substances, some completely undocumented and many with varying effects on human health.

One substance, tubocurarine, commonly used as a muscle relaxant, has been shown to be very toxic to small children and infants. In some cases, it has caused respiratory paralysis even in adults. It is not known what the exact tolerance level is, so it is imperative that you contact a doctor if you feel difficulties in breathing.

The rest of the reported problems come from excessive use. Among them is a very powerful sedative effect due to a substance called magnocurarine. It is dangerous and therefore large doses of extract should be avoided. Another effect is a strong sensation of vertigo that can be difficult to deal with. Consult a doctor as fast as you can if you think you have greatly exceeded the normal dose.

Because of the considerations above, most herbal suppliers don’t recommend taking it for more than six weeks. Also, it is not to be used during pregnancy, lactation, or if you have had surgery less than two weeks prior.

Magnolia bark extract is found in two major forms on the supplement market. The first one is the capsule or tablet form. When in this form it is usually associated with other ingredients in order to target one specific area of beneficial effects. There are many supplements that use magnolia bark in this way. The second, less common form is a liquid extract packaged in a small bottle. In this form it is recommended to add small drops to tea, water, or food.

Most of these products can be found online with ease and in local pharmacies that sell natural remedies. Always consult a competent person before using this extract.