Ginkgo Standardized is an herbal remedy able to improve memory and support cognitive function, mainly by stimulating blood flow to the brain.

The producer’s name is Nature’s Way, a USA leader in herbal medicine. Nature’s Way has more than 40 years’ experience and provides variously quality supplements obtained only from natural sources (Ginseng, Cranberry, Aloe) that proved their efficiency during many years of studies and testing. The ingredients are carefully selected, purified, and transformed to make sure that the final product contains the optimized doses and has its required effect.

The main extract is obtained from Ginkgo Biloba leaves, but also Gotu Kola leaf extract is added to the formula. The two plants work together for a better effect as the product is recommended especially to improve brain functions.

Ginkgo Standardized is recommended for different ages because it can stimulate memory and concentration so it can be used from young people, adults to older people. The last category is more likely to suffer of cognitive decline and memory loss because of the natural process of ageing or in other cases caused by other neurodegenerative diseases (Alzheimer).

Ginkgo Standardized is an herbal remedy able to support cerebral functions like memory and concentration.

The appreciated product improves other symptoms like problems of balance, dizziness, muscle cramps, and some visual and hearing disorders also generated by damaged blood flow.

Ginkgo Biloba extract has been used for many years for its benefits (especially in Asia). It has been studied and tested and its functions have proved to be effective. It is able to reduce permeability of the capillaries and veins and increase their resistance being helpful for blood circulation problems to the brain and extremities. Gotu Kola extract also stimulates brain activity and increases product’s effects.

For most of the consumers the product has no precaution in administration, except for possible allergies or minor stomach aches (general precautions). People suffering of other particular dangerous diseases or under medication should talk to the doctor first. Pregnant and lactating women are another category of patients who should ask for a specialist opinion before taking the product.

3) What Does Ginkgo Standardized Do?

Ginkgo Standardized is a herbal remedy containing Gingko Biloba leaf extract, which has been used and studied for many years for its valuable properties. This herbal extract stimulates blood flow to the brain and extremities and protects circulatory vessels. There are also studies based on the free radical inhibitor role of this active substance.

The manufacturer also added Gotu Kola Stem leaf extract to the formula to increase the principal functions of the remedy, as the extract is admitted to stimulate brain functions and energize the central nervous system (cerebral tonic) and can combat anxiety and depression. It has a positive effect upon the circulatory system and has diuretic properties (regulates blood tension). Gotu Kola may also be useful for slowing the evolution of retinopathy.

Only minor gastric disorders have been pointed out by some people taking Ginkgo Biloba extracts, and there is always the risk of allergies to any intake substance. Even if studies show that anyone can benefit from Ginkgo Standardized, as the product has no remarkable side effects, older people affected by poly-pathology should ask for the doctor opinion first. There is no information about pregnant and lactating women.

The ingredients of this formulation are based on many years of study, and testimonials of people testing it prove that the formula is safe and efficient as expected.

There are online testimonials about this supplement. What it has been reported includes:

The manufacturer recommends 1 capsule twice per day with food or water, but the dose can be increased to 4 capsules per day for stronger effect when needed. Therefore the average price of Ginkgo Standardized classifies it as an accessible herbal remedy and many sites offer substantial discounts.

The manufacturer does not offer trial samples or the possibility to order it from its site, but the interested USA customers can find out about the nearest store providing the product from the company site.

It is accessible from everywhere in the world and can be relatively fast delivered with reasonable costs. It can also be bought from pharmacies and herbal stores in countries all around the globe.

7) How to Use Ginkgo Standardized

Generally the formula is appropriate for all categories of people who can benefit of its properties while crossing stressing and more demanding periods in their life. The manufacturer recommends 2 capsules per day, with water or food, but for stronger effect the dose can be increased up to 4 capsules per day. Because Ginkgo Standardized stimulates brain functions it is better to administrate it in the morning or in the afternoon.

Ginkgo Standardized is suitable for different people suffering of memory and concentration problems, which are not generated by other severe diseases. It can be especially used by older people where the mentioned symptoms are more frequent, and sometime associated with dizziness, troubled balance, muscle cramps, and hearing and vision problems also generated by blood circulation deficiency.

There are countries where some products consisting in Ginkgo Biloba extracts are admitted as drugs, and the treatments are recommended and supervised by doctors. This proves that the extract has been strictly tested not only for its effectiveness but also for any possible negative effects for many years already.

Generally everybody can use the product, because it has no secondary effects, but there are some people who should be more careful before taking Ginkgo Standardized ( like pregnant women, children, or older people affected by other dangerous diseases like those influencing blood coagulation). 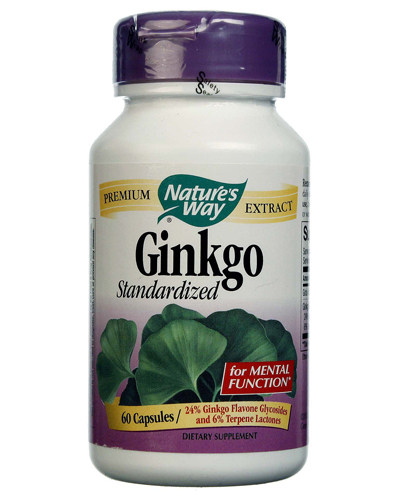 Q:
What is Ginkgo Standardized?
A:

Ginkgo Standardized is a formula combining Ginkgo Biloba and Gotu Kola leaf extracts in order to stimulate brain functions. The product is manufactured by Nature's Way, a trusted and appreciated manufacturer from USA. Due to its components, Ginkgo Standardized is able to improve blood flow to the brain and extremities. It provides memory, concentration and attention support and releases unpleasant symptoms like coldness in legs and arms or muscle cramps. Gikgo Standardized has no side effects if taken correctly and can be successfully used by adults, young, and old people who want to support or improve their brain activity.

Q:
Are Ginkgo Standardized benefits actually a reality?
A:

Ginkgo Standardized has a balanced herbal composition consisting in the extracts of 2 famous and elaborated studied plants. The substances found in the product work together for stronger effect. This way the herbal remedy is successfully used by different categories of people from adults, students and older people who noticed that their everyday life is affected by symptoms that can be easily improved by the supplement.

As testimonials and scientific studies present the main properties of the supplement recommend Ginkgo Standardized primary for its ability to activate brain functions, but it also proved its utility in releasing symptoms generated by damaged blood circulation to the extremities (leg cramps, coldness in legs and arms).

I tried other Gingko Biloba supplements before but I wasn’t very satisfied. I am very relieved that I’ve finally found a formula that really works for me. I’ll use Ginkgo Standardized every time It is amazing through stressful times.

My aunt uses this product and she is very satisfied as she no longer has to deal with the unpleasant sensation of coldness in arms and legs. She is like a different woman now, she is laughing more she is more optimistic.