Ginkgo Biloba supplements are available in a surprising range of sizes, formulations, and potencies from many brands. Regarding brand reliability, Nature’s Bounty is a clear winner. They’ve been an established brand in dietary supplements since 1971 with products that undergo multiple quality-assurance tests.

Our Ginkgo Biloba review below will analyze the most critical elements of this herbal brain supplement, starting with the manufacturer and finishing with the claimed benefits, cost per serving, potential side effects, and what real buyers think of the product.

Ginkgo Biloba is one of the many supplements for brain function and mental alertness available today.

According to the manufacturer, this standardized Ginkgo extract may help maintain a healthy circulation, support mental alertness and healthy brain function, and is perfect for occasional mild memory problems associated with aging.

The product is available in two forms – 60 mg (200 capsules) and 100 mg (100 capsules) – and it’s moderately priced compared to other similar supplements.

2) The Company Behind Ginkgo Biloba

Nature’s Bounty Co., formerly known as NBTY[1], is an American manufacturer of vitamins and nutritional supplements located in Ronkonkoma, New York[2]. The company was established in 1971 by Arthur Rudolph, originally as a mail-order, catalog-based company.

Check out our Brain Pep review to see how ginkgo biloba complements other nootropics.

4) What Does Ginkgo Biloba Do?

Ginkgo Biloba supplements are made from the antioxidant-rich leaves[3] of a native Chinese tree of the same name. The tree is unique because it’s the last living species of its plant order, Ginkgoales, and dates back more than 270 million years.

The plant has been used in traditional Chinese medicine for millennia and made its way into western medicine towards the end of the 20th century.

Today, Ginkgo Biloba is typically used in the treatment or prevention of several health problems, including:

Ginkgo is one of the most researched plants, maybe because of its growing popularity among supplement manufacturers. The scientific interest for this herbal extract is essential, especially since many other similar herbal ingredients lack relevant research data.

But let’s take a quick look over some relevant data.

One study, published in October 1997 in JAMA[9], determined that EGb 761, an extract of Ginkgo Biloba, is safe to use and may help maintain and perhaps improve cognitive and social functioning in patients with dementia for between 6 and 12 months.

Another study similarly found that EGb 761 may also be clinically effective in managing mild to moderate primary degenerative dementia of the Alzheimer type or multi-infarct dementia.[10]

Ginkgo Biloba supplements have been shown to enhance mental processing and improve memory in healthy older adults when taken daily for six weeks[11][12].

A study[14] published in the Journal of Psychiatric Research concluded that patients with a generalized anxiety disorder who supplemented with a Ginkgo Biloba extract experienced better anxiety relief than those who received a placebo.

During the study, 170 people with generalized anxiety were treated with either 240 mg or 480 mg of Ginkgo or a placebo. The group treated with the highest Ginkgo dose reported a 45% greater reduction in anxiety symptoms than the placebo group.

Giving the ingredients available in this herbal supplement, some users may experience mild to moderate adverse effects, typically as a response to how their bodies adjust to the supplement.

Ginkgo Biloba side effects[15][16] may include:

This herbal supplement contains Ginkgo Biloba. The available research suggests that herbal extracts are more likely to cause adverse effects and negative interactions with specific prescriptions when continuously taken for more than 30 days.

Therefore, we recommend cycling the supplement regularly, taking one week off every three weeks as a minimum. Longer breaks are advised after repeated cycles.

7) Precautions of Ginkgo Biloba Use

Medications to interact with Ginkgo Biloba include:

You can purchase the supplement from the official Nature’s Bounty website or various online retailers such as:

For adults, take one (1) capsule daily, preferably with a meal. Capsules may be opened and prepared as a tea.

"I've noticed that since I've been taking this, I can recall information much faster and completely. My sister has been taking this same supplement, but it hasn't worked for her, so I suppose every case is different. I would recommend trying it but expect the results to reveal themselves over time." [Read full review]

"These tablets were alright. They didn't have any funny after-taste or anything, but I really didn't notice any difference in my brain's functionality like I thought I would, and I'm disappointed." [Read full review]

"I absolutely love Ginkgo Biloba. The cognitive enhancement can be noticed right away, but it is more pronounced when you take it regularly. In my experience, the effects would diminish after a few weeks of taking it. I usually take 2-4 capsules daily." [Read full review]

Ginkgo Biloba is one of the few herbs that has been thoroughly researched over the past decade. Particular compounds available in the Ginkgo extract have been found to help treat cognitive disorders such as dementia and Alzheimer’s.

You can also use it as an anti-aging herbal supplement since it has potent antioxidant properties and can reduce chronic inflammation.

If you are looking for an herbal supplement that may benefit your general well-being and cognition, Ginkgo Biloba may be an excellent choice. 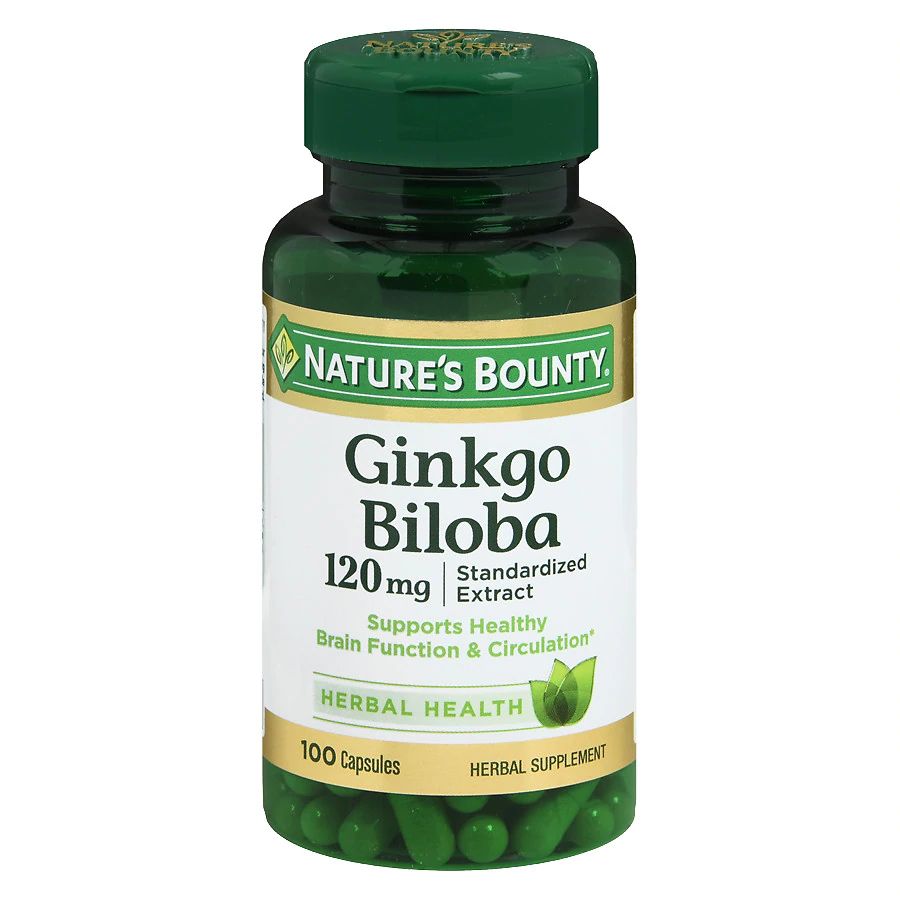 Q:
Ginkgo Biloba is all about what?
A:

Q:
What are the side efects of taking Ginkgo Biloba?
A:

Q:
Where can I buy Ginkgo Biloba?
A:

The supplement is widely available online. You can purchase it either from the official Nature's Bounty website or various online retailers such as Amazon, iHerb, eBay, Walmart, CVS, Walgreens, GNC, or eVitamins.

Q:
How much does Ginkgo Biloba cost?
A:

Q:
How can Ginkgo Biloba help me improve my cognitive health?
A:

Ginkgo has been used for millennia to treat a wide range of health issues. Today, the plant is one of the most studied and widely used herbal ingredients. However, keep in mind that each individual is different, and what works for a user may not work for another.

Ginkgo Biloba interacts with certain prescriptions, reducing the medication effectiveness and increasing the risk of potentially dangerous adverse effects. Consult a medical doctor or healthcare provider before taking this or any other dietary supplements.

Q:
Can I take Ginkgo Biloba with other supplements?
A:

You can use the herbal supplement in conjunction with other nutritional supplements or multivitamins. However, since Ginkgo extracts may interact with certain ingredients (other herbal extracts, vitamins, minerals, etc.), we recommend consulting a healthcare provider before taking the product.

Q:
Does Ginkgo Biloba have a recommended daily dosage for children?
A:

This herbal supplement is not intended for use by persons under the age of 18.

Q:
Are there any dangerous ingredients in Ginkgo Biloba?
A:

Q:
How do I know if Ginkgo Biloba is right for me?
A:

Q:
Is Ginkgo Biloba recommended for pregnant or nursing women?
A:

Q:
How much Ginkgo Biloba should I take a day?
A:

For adults, take one (1) capsule daily, preferably with a meal.

Q:
What is the fastest way of contacting Ginkgo Biloba customer support?
A:

Q:
Can I return Ginkgo Biloba?
A:

To return a product, simply contact the customer support department and ask for a refund. In general, the company accepts returns for a limited period following a purchase.

Customers are generally happy with this brain supplement. Still, some users complained about not noticing any benefits even after taking the product for a long time.

Q:
What other people say about Ginkgo Biloba?
A:

Nature's Bounty Ginkgo Biloba reviews and testimonials on Amazon are overwhelmingly positive. The supplement is rated 4.6 out of 5 (7,525 ratings), with 91% of the users rating the product with at least 4 stars.

Q:
Who makes Ginkgo Biloba?
A:

Ginkgo Biloba is made by Nature's Bounty.