Ginger Pastilles is promoted as candy but may also be used for nausea, as well as common cold symptoms, thanks to the medicinal uses of ginger. The formula was developed by St. Claire’s Organics.

St. Claire’s Organics is a manufacturer of organic candy from the United States. The company has several product lines, such as peppermints, organic sweets, cocoa mix, organic tarts, as well as aromatherapy pastilles. The company promotes the importance of consuming only organic products that are allergen-free. Therefore their formulas are 100% vegan and do not contain allergens such as dairy, eggs, gluten, etc. Moreover, St. Claire’s Organics also believes in the importance of medicinal plants and folk medicine, thus it supports a non-profit organization by donating them part of its net profit in order to lend a hand in preserving the herbal knowledge of indigenous cultures.

St. Claire’s Organics promotes Ginger Pastilles as an organic candy with spicy natural flavoring. In addition, it is based entirely on organic ingredients. The producer also mentions that Ginger Pastilles is not an important source of calories from saturated fat and dietary fiber or vitamins A, C, iron, and calcium. There are not any indications as to who should use the pastilles on the manufacturer’s site, nonetheless ginger is quite safe and has been used for a long time as a spice, in sweets and as a medicinal herb.

Ginger Pastilles by St. Claire’s Organics is based on ginger which is used as both a medicinal herb, but also for culinary purposes (ginger ale, dipping sauces, and pickled ginger). As a medicinal herb, ginger is primarily known for alleviating symptoms of nausea and vomiting associated with motion sickness, chemotherapy, pregnancy, and also common cold symptoms. It may also improve digestion, based on anecdotal evidence and laboratory tests. Scientists have concluded that ginger might help with vomiting and nausea in certain cases. Moreover, ginger may decrease blood sugar levels (thus interacting with diabetes medication) and help against blood clots (consequently it could interfere with blood thinning medicine). Ginger is generally considered safe although some people have reported mild symptoms of heartburn or headaches.

2) What Are Ginger Pastilles Ingredients?

Ginger Pastilles contains ginger in various forms (powder and essential oils as well as ginger oleoresin, which is a mixture of oil and resins). Ginger has been used for a long time in the kitchen as a spice and also as a medicinal plant. According to traditional medicine, ginger may treat nausea and vomiting, while helping digestion. It is sometimes used as a remedy for cold and influenza. According to scientific research, ginger may treat pregnancy-related nausea and nausea symptoms that patients experience after chemotherapy sessions. Also, it might help prevent blood clotting, but further research needs to be done. Among side effects, some people have complained about gas, heartburn and bloating. Ginger seems to interact with blood thinners, diabetes medication, and blood pressure drugs. Also, it might interact with herbs that act as an anticoagulant, such as turmeric and garlic.

The Ginger Pastilles formula has not been evaluated by the Food and Drug Administration. The producer sells them as organic sweets and does not list any side effects on its website. St. Claire’s Organics advises customers to take two pastilles per serving (they have 1.78 g), but it does not provide details on the number of daily servings.

We have found several online customer testimonials about Ginger Pastilles. What it has been reported includes:

The product is sold in tins of 1.5 oz which contain about 54 pastilles. The producer does not mention the number of daily servings, but if you take one serving per day, then one tin is enough for almost one month. The average cost for one month’s supply would recommend it as an inexpensive product. Even if you take four pastilles daily, Ginger Pastilles has an appealing price.

You can purchase the product online from St. Claire’s Organics website. They also offer affordable shipping charges. You can also order the formula from various online retailers, mostly as some of them offer discounts. It is also possible for you to buy packs of six Ginger Pastilles tins in some online stores.

The Ginger Pastilles formula has not been overseen by the FDA in terms of potential side effects and effectiveness. The producer does not mention side effects associated the use of Ginger Pastilles. St. Claire’s Organics recommends servings of two pastilles, therefore one tin of some 54 pastilles should be enough for 27 days if you have only one daily serving. One serving contains 1.5g of sugars and 6 calories. The manufacturer does not say anything about the maximum number of daily servings.

8) Our Verdict on Ginger Pastilles

St. Claire’s Organics recommends Ginger Pastilles as herbal sweets for anyone who enjoys their spicy taste. As ginger is not only a culinary herb but also a medicinal one, the pastilles may also help you with digestion problems, nausea, vomiting, and symptoms of common cold. People who have used this formula have had mixed opinions especially when it comes to the Ginger Pastilles taste. However, there are not so many consumer testimonials over the Internet. Since the product is quite inexpensive and easily available online, we believe it deserves at least a try. However, as ginger interacts with some drugs, you should consult your doctor before use if you are currently taking medicine. 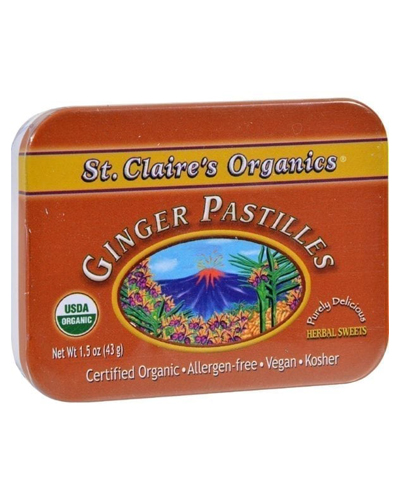 clear
Q:
What are the core ingredients in Ginger Pastilles?
A:

Q:
What is Ginger Pastilles?
A:

Ginger Pastilles is advertised as organic herbal candy with a pleasant spicy taste. It is manufactured by St. Claire's Organics. As it contains ginger, it may also help alleviate symptoms of nausea, vomiting and cold, as well as improve your digestion. Ginger may interact with some drugs (blood thinners, diabetes, and blood pressure medication). The formula is primarily promoted as candy therefore the manufacturer does not provide details on adverse side effects and on who should use Ginger Pastilles.

Ginger Pastilles is from the organic herbal sweets line developed by St. Claire's Organics. The formula has received mixed online consumer reviews, with some customers being satisfied with the product while others complained about its taste and the fact that the pastilles might easily disintegrate.

Ginger has been used for stomach discomfort and colds for a very long time, and scientific studies have shown it might provide relief from nausea and vomiting in certain cases. Therefore, the formula may be effective, but please bear in mind that Ginger Pastilles is mainly advertised by St. Claire's Organics as organic candy and not for medicinal uses. You should also discuss with your doctor before consuming the pastilles as Ginger interacts with some drugs.

Ginger Pastilles comes at a very affordable price which may also feel tempting to some consumers.

I took Ginger Pastilles for motion sickness while I was on the plane. They take longer than synthetic drugs to act but I like the formula because it’s all organic.

I like the Ginger Pastilles taste very much! It’s intense.

Is ginger pastilles suitable for vegetarians and also is it safe to have in pregnancy? How many pastilles you can take in one day.?