For-Til B12 Review – Is it Effective?

Advertised as a fortified tillandsia remedy in a mixture with Vitamin B12, For-Til B12 targets the support of cellular functions and essential neurological function. It generally comes as support supplement that focuses on maintaining proper levels of immunity cells. The company producing this supplement is called Standard Process, a US-based firm.

The company was founded by Dr. Royal Lee who stated to have challenged the scientific beliefs viewed as common by most, thus choosing a holistic approach in offering nutrients to the entire organism. He also states that the source of a remedy’s components is by far the most important, even compared to the amounts utilized. A feature that differentiates Lee’s company from others which have the same purposes is the fact that their products are separated into three major categories which are: Standard Process Veterinary Formulas, Mediherb and Standard Process whole food supplements. Nowadays they manufacture, label, and sell approximately three hundred forms of nutritional supplementation for both people and animals.

This particular formulation is based on the positive effects of a mixture between Tillandsia Powder and Vitamin B12 which promises to maintain normal blood levels in people with no serious medical issues.

Promoted as a dietary supplement that provides support when it comes to essential cellular and neurological functions, For-Til B12 bases its beneficial effects on a combination between Tillandsia Powde and Vitamin B12 r. Often referred to as Spanish moss and usually found in areas like southeastern coastal plain of United States or Central and South America, Tillandsia usnevides is a part of the pineapple family. It represents a nonparasitic plant helped during its growth by another one whose aerials roots are open to humid atmosphere. This plant features a substance called HMG that may lower the levels of sugar in the blood, thus lowering the risks of developing diabetes.

The main ingredient of For-Til B12 is Vitamin B12. The amount offered per serving is 3 mg and it is within normal daily dosages. Used in preventing or treating Vitamin B12 deficiency, a condition usually marked by decreased levels in the blood. In addition, pernicious anemia which is usually a case for older people may also be treated by taking supplementation based on this vitamin. In some cases, this component can also help with conditions of the central nervous system such as Alzheimer’s disease, concentration or memory loss. Despite the fact that it is considered to be likely safe when administrated orally, there are some situations in which the consumption of this vitamin may cause some unwanted side-effects such as blood clots, allergic reactions or diarrhea.

2) Details on For-Til B12 Ingredients and Uses

B12 is also found in supplements like Stop Aging Now CalmTrex.

Advertised as a remedy that should provide support to essential neurological and cellular functions, For-Til B12 relies its benefits on a mixture between Vitamin B12 and Tillandsia Powder. Commonly referred to as Spanish moss and growing in the southeastern coastal plain of the United States as well as Central and South America, Tillandsia is a member of the pineapple family. It’s a nonparasitic plant supported by another one whose aerials roots are exposed to the humid atmosphere. This herb contains a substance called HMG which may lower the sugar levels in the blood, thus helping people with high risks for diabetes.

The core ingredient of this remedy is, however, Vitamin B12. The amount per serving is three mg of Vitamin B12 which is within normal dosage. Used for preventing Vitamin B12 deficiencies, a condition marked by low levels in the blood. Additionally, a type of anemia called pernicious anemia and usually found in older people can also be treated in a natural way by using supplementation based on this vitamin. In some cases, this ingredient can prove reliable for conditions of the nervous system like concentration, Alzheimer’s disease or memory loss. Even though it is viewed as likely safe when taken by mouth, there are some cases in which the intake of this vitamin may lead to some unwanted side effects like allergic reactions, blood clots, or diarrhea.

There are online customer testimonials about For-Til B12. What is being reported includes the following:

Found for purchase both on the Standard Process web page as well as other online retailers, For-Til B12 is sold in bottles that contain 90 capsules. Because the daily suggested dosage is a capsule per meal, a bottle should be sufficient for a month of treatment if all goes according to the product’s labels. However, if outside the U.S., people can’t order directly from the official producer page, thus other online retailers with varying prices are needed. Overall, its price is viewed as affordable, and there were no complaints in this area. A money-back guarantee policy is not included.

The daily suggested daily intake of For-Til B12 is one capsule per meal, thus the individual should consume three capsules on a daily basis.

Promoted as a product that offers proper quantities of Vitamin B12 for people that suffer from deficiencies or just having medical conditions of the nervous system, For-Til B12 is mixed with Tillandsia in this formulation, thus also lowering sugar levels. Due to this, people who are exposed to high risks of developing diabetes or those with raised cholesterol levels directly benefit of the formula’s properties. Despite the fact that there are no statements form the producer about potential side-effects or people who drugs that shouldn’t be consumed in parallel with this treatment, because of its components, some may happen and it is important to stop using the capsules if so. 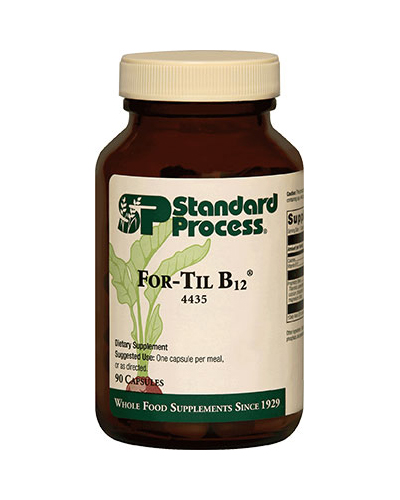 Things Customers Want to Know about For-Til B12

clear
Q:
What are the active ingredients in For-Til B12?
A:

For-Til B12 represents a dietary supplement that focuses on the qualities offered by the mixture between Vitamin B12 and Tillandsia. It is recommended for people suffering from anemia or some conditions related to the nervous system. The product was first introduced on the nutritional market in 1958 and since then has received mostly positive feedback. Although further research is required, it has proved reliable particularly for elders.

Promising to offer proper amounts of Vitamin B12 for people suffering from lacks or just those with medical conditions related to the nervous system, For-Til B12 also contains Tillandsia which lowers the sugar levels in the blood. Because of this, people exposed to high risks of diabetes or those with high large cholesterol levels are one of the direct benefits of this formulation. Although there are no statements from the manufacturer concerning potential side-effects or people who shouldn't consume this product while taking other drugs or suffering from serious medical conditions, due to its components, some may appear, and it is important to stop taking the capsules if so immediately.

I’ve been suffering from anemia for over a year, but this product has finally proved that I can get over it. I would totally recommend it.

Great supplements this brand is great! I recommend it to all. Great source of B12 great for Seattle weather.

Is there any chance this could cause dizziness, nausea and vomiting? Yesterday was the first day I took this and I was dizzy all night. This morning I am still a little dizzy and I can’t keep anything down.

Standard Process For-Til B12 contains Tillandsia usneoides (Spanish Moss). This herb has been linked to several mild to moderate side effects, including restlessness, vomiting, dizziness, tremors, kidney damage, and convulsions.