Collagen C is promoted as a remedy that supports the health of connective tissues, hence promoting better immune responses while also representing a whole food source of Vitamin C.

The business behind Collagen C is called Standard Process, the same name behind Min-Tran, a mood-enhancing supplement, and Symplex F, a women’s health supplement.

Founded in 1929, Standard Process represents a project of Dr. Royal Lee who wanted to materialize his nutritional beliefs based on the idea that source of an ingredient is of moreimportancethan the amount of each used in the products. Due to this, most of his nutritional creations have specific quantities of each ingredient. A particular feature of the company is the fact that they separated their products in three categories that are Standard Process whole food supplements, Standard Process Veterinary Formulas, and MediHerb.

Released on the nutritional market in 1972, Collagen C contains Vitamin C as a main ingredient and provides approximately on hundred mg of it per serving. Combined with Vitamin C, there is a proprietary blend that has several animal and herbal extracts.

Standard Process claims that their ingredients haven’t disassociated into isolated compounds during production and due to this they are offered in a complete and intact manner. Moreover, degreed microbiologists and chemists are conducting bacterial and analytical tests on raw materials, product batches and the finished product.

Collagen C is advertised as a dietary supplement that relies its beneficial effects on a mixture between Vitamin C and a proprietary blend containing animal and plant extracts. One of these herbal extracts is represented by Echinacea. It was utilized by Native Americans for its herbal properties before European settlers managed to get to North America. These settlers found out about the health offering powers that Echinacea has when it comes to treating several conditions. The majority of the studies showed that its effects are linked to human immune system. Some findings revealed that this plant is useful for minimizing effects that appear during seasonal changes. It works by enhancing the organism’s ability to cope with stress. When consumed for three to five days at onset of symptoms, this herb appears to lessen the severity and duration of many kinds of seasonal changes.

3) Is Collagen C Right for You?

Collagen C is promoted as a remedy that bases its beneficial effects on a combination of a proprietary blend featuring plant and animal extracts and Vitamin C. One of these plant extracts is Echinacea. It was used by Native Americans for its herbal remedies long before European settlers came to North America. These settlers learned about the health offering powers of Echinacea in treating several conditions. Most of the studies revealed its effects on the human immune system. Some findings showed that this plant is useful when it comes to minimizing effects during seasonal changes. Echinacea works by increasing the body’s ability to cope with stress. When taken for three to five days at the onset of the symptoms, this plant appears to lessen the duration and severity of many kinds of seasonal changes.

Another ingredient found in this remedy is rose hip. Its bright orange-red fruit and seeds feature a wealth of nutrients including flavonoids, malic acid, ascorbic acid, citric acid, tannins, carotene, sucrose, fructose, vitamins A, C, B3, E, D, and P, as well as zinc. It was used efficiently as a nutrient, tonic and regularity promoter. The powder obtained from rose hip boosts the organism’s ability to fight off challenges. Many of the vitamins featured made it famous in the nutritional field because it can lessen effects of exhaustion and fatigue.

There are online customer testimonials about Collagen C. What is being reported includes:

Found by bottles that contain 90 tablets, Collagen C is often viewed as a moderate priced supplement. People who have at least minimum wage can easily afford to take this supplement to boost their immune system. Because the daily recommended dosage is of one tablet per meal, a bottle can last for up to three months of usage if there are no excesses involved. Those who are living in the United States may purchase this remedy directly from official manufacturer website. However, because Standard Process doesn’t have an international shipment policy, people from outside this country should seek the supplement on their local or other online suppliers where the price may vary.

Other component found in Collagen C is rose hip. Its bright orange-red seeds and fruits contain a wealth of nutrients including malic acid, ascorbic acid, flavonoids, citric acid, tannis, sucrose, fructose, carotene, vitamins A, B3, C, E, D, and P, as well as a mineral: zinc. It was efficiently used as a nutrient, tonic, and regularity promoter. The powder obtained from rose hip enhances the body’s ability to fight off challenges. It became popular on the nutritional field because of its vitamins that it lessen effects of fatigue and exhaustion.

Advertised as an immune tonic and booster, Collagen C is suggested for people that are either going through challenging periods which may weaken their immune system or people who usually catch a cold faster than a mouse catches cheese. It contains ingredients with proven positive results when it comes to improving the health of the immune system. In comparison with similar supplements, it offers a whole food source of Vitamin C which offers a series of antioxidants that determine the body to fight more vigorously against the damage made by free radicals. There was no customer review that revealed side effects so far. 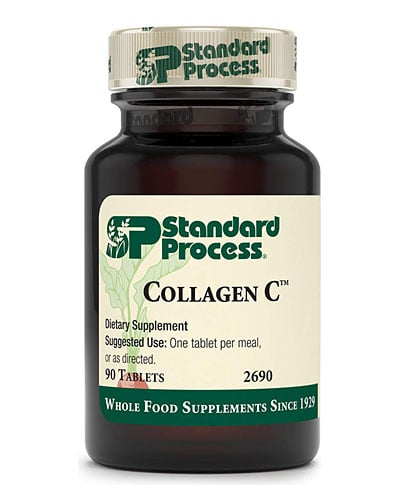 clear
Q:
What are the active ingredients in Collagen C?
A:

Q:
Collagen C is all about what?
A:

Collagen C represents a dietary supplement that features a combination between Vitamin C and a proprietary blend which is meant to boost the immune system. It was released on the nutritional market in 1972 by Standard Process. It is mostly recommended for people who easily catch colds or those suffering from fatigue or exhaustion. Because it contains Echinacea, it can fight off conditions that may appear during seasonal changes.

Promoted as an immune booster and tonic for the immune system, Collagen C is recommended for people who are either surpassing challenging periods that may weaken their immune system or those who are usually catching colds. It features ingredients with scientifically proven results when it comes to enhancing the health of the immune system. Compared to similar remedies, it provides a whole food source of Vitamin C that should also offer a series of antioxidants that should determine the organism to fight more vigorously against damage done by free radicals. No side-effects were mentioned so far, but if any appear, it is advised to discontinue the treatment.

I’ve been fighting exhaustion for more than twenty years now. One day, I got tired and said it’s time to try to fix it somehow. I’ve stumbled across this supplement.. and ta-daa! It works. I’m not entirely healed, but I’m on my way.

Ever since I’ve started using this remedy I haven’t caught a cold. My head doesn’t hurt anymore and I have to say that I rely trust Standard Process products because they never disappoint.