Brain Boost is a Nootropic supplement advertised to bring various cognitive benefits including enhanced memory and retention, boosted focus and concentration, higher energy levels, and increased work capacity. The formula is produced by F2 Nutrition, a relatively unknown manufacturer of dietary supplements that prides to have created some of the world’s best formulas.

For example, Brain Boost is advertised as the world’s most effective cognitive enhancer. According to its producer the formula has the ability to increase, by 10 times: memory, focus, executive function, and mental clarity. This however is another unsupported by realistic evidence statement. In our opinion this is just another untested brain supplement advertised as highly effective but lacking actual proof regarding the right dosage, effects, or side-effects.

The formula includes various Nootropic substances which have indeed been the subject of clinical trials and studies, but this does not necessarily prove the potency of the entire formulation.

The supplement is based on a relatively low number of chemicals, some of which have been used for decades as cognitive enhancers.

Piracetam is one such chemical. Synthetically obtained, the compound was designed to improve communication in corpus callosum, a part of the brain that facilitates communication between the right and left brain hemispheres. The compound was and still is highly researched but its entire mechanism of action is not completely understood. Piracetam has been shown to exert a neuroprotective activity and improve Oxygen flow in the brain. Its main benefits refer to memory, learning, alertness, and mood.

If you like a more natural approach to a nootropic formula, you might want to look at what we had to say about Schiff Nutrition Neuriva.

First of all we have to say that we didn’t have access to the complete list of ingredients as the official site does not provide one.
Looking at the ingredients enumerated by the producer on the presentation page, we noticed that the formula contains a very popular Nootropic from the Racetam class of compounds called Piracetam. The compound exists since the 1960’s when it was synthetically obtained for the purpose of improving communication between the brain’s two hemispheres. Although its mechanism of action is not fully understood, it has been established that Piracetam is effective because it improves the permeability of cell membranes, allowing a more effective transmission of information between neurons. The chemical also improves the delivery and dispersal of oxygen into the brain cells and increases circulation to neural tissues. In addition, Piracetam has a neuroprotective quality which delays brain decay associated with aging.

Piracetam was shown to be effective in improving thinking, learning, alertness, recall, memory, and mental energy. The chemical is very well tolerated and considered generally safe for humans, particularly as this is a water-soluble compound easy to eliminate from the body when excess occurs.

CDP-Choline is another ingredient of the formula. This is one of the three Choline-containing phospholipids along with Alpha-GPC and Phosphatidylcholine, meaning it has the ability to convert to Choline, the main precursor of the neurotransmitter Acetylcholine. Acetylcholine is involved in the processes that help maintain optimal memory function and alertness. CDP-Choline is also necessary for the maintenance of healthy cell membranes.

Brain Boost contains several other studied brain nutrients involved in specific processes related to the brain. Because of this, the formula could be a potent cognitive enhancer, but there is actually no evidence that the specific combination of ingredients included in it is as effective or as safe as its individual parts.

5) Precautions of Brain Boost Use

Brain Boost is a very expensive brain supplement. Specifically, one bottle that provides the necessary supply for 25 days is now sold for $99.97. We say now because this is a discounted price, the standard one being $125.99. However, the manufacturer offers a 30% discount for consumers who subscribe to their website. A 30 day money-back guarantee is also available.

Another active substance in the formula, L-Tyrosine is an amino-acid that naturally occurs in the body. It is produced from another amino-acid called Phenylalanine. Like Piracetam, L-Tyrosine was shown to cross the blood brain barrier, which is a very important condition for nutrients advertised to improve brain function. Tyrosine is actually a precursor to the most important brain chemicals called neurotransmitters. This compound is used to build-up Norepinephrine, Epinephrine, and Dopamine, neurotransmitters that play important parts in maintaining alertness, attention, and focus. Because of its role in the synthesis of these neurotransmitters Tyrosine is also believed to help reduce stress, prevent depression, and treat sexual dysfunctions, and may contribute to the maintenance of a healthy weight.

The active ingredients in the formula are popular Nootropics and brain nutrients that were clinically tested for potency in areas related to cognitive health. However, there is no actual proof that Brain Boost can increase certain brain functions by 10 times. Also, the supplement is sold for a high price which may discourage a large part of potential consumers who don’t know much about the nutritional supplements market. The high cost can result from the use of top-quality, highly potent active substances, which is the case of this formula. The raw materials used to formulate Brain Boost are expensive chemicals, some used successfully for decades in treating affections of the brain. They were also proven effective (to some extent- sometimes results are mixed) in promoting overall cognitive health. 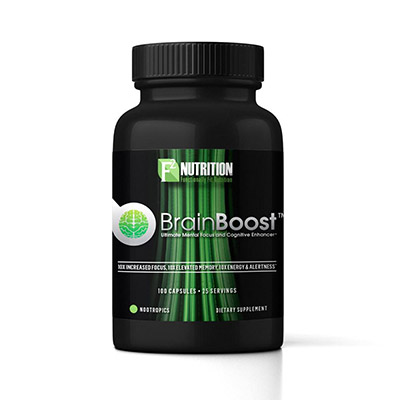 clear
Q:
What are the Brain Boost ingredients?
A:

Q:
Brain Boost is all about what?
A:

Brain Boost is a brain supplement advertised as a complete Nootropic that is based on a proprietary blend. The formula is said to be effective in promoting optimal focus, memory, alertness, mental clarity, and executive function. The product is manufactured by F2 Nutrition, a company that does not commercialize a very large number of supplements at this time. The scientifically proven ingredients included in the formula are: Piracetam, CDP-Choline, Tyrosine, Carnitine, Theanine, L-Phenylalanine, Coffee, and artichoke extract. These are high-quality raw materials that ease neurotransmitter synthesis in the brain due to their abilities to cross the blood brain barrier.

Unfortunately Brain Boost comes at a high cost (starting from $70). The standard listed price is $126 and one bottle will only last 25 days. A money-back guarantee and a free-trial option are available at this time. Please carefully read all the details regarding the refund policy and free samples, as the manufacturer doesn't cover the shipping and handling expenses.

Q:
Are Brain Boost benefits actually a reality?
A:

The formula certainly has a good potential in promoting peak mental performance and providing the necessary fuel for optimal brain capacities. However, this is not a clinically tested product and there's no actual proof it brings noticeable cognitive improvements in those who use it. Considering the price you have to pay, it might be best to ask the opinion of a professional doctor who can make a more informed evaluation of the product. We strongly advise consumers to try the free sample and look-out for any adverse reactions. There's no point in ordering the formula if you notice the occurrence of unwanted side effects even from the first days of use.