Dendrobim 600 Review – 8 Things You Should Consider

Dendrobim 600 is a supplement designed to increase energy levels, improve mental focus, lower blood pressure as well as induce mild hyperglycemia. It is manufactured by a Canadian company known as SD Pharmaceuticals. The company has useful links on its official website that can help you locate and order other SD Pharmaceutical products. SD Pharmaceuticals claim that this supplement boosts mental focus to amazing levels, increases endurance and energy levels. Is there a better supplement to ingest before a work out session than Dendrobium 600? Stick around and find out if its claims are real.

Dendrobium 600 features a certain herb known as Dendrobim used in Traditional Chinese Medicine. It was referred to as Shishu and was mostly found in Southern Asia. In China, Dendrobium has been used for over a millennium for its medicinal properties. Recently, researchers discovered new chemical alkaloids in Dendrobium that improve mental focus, increase and sustain high energy levels.

Before the introduction of modern medicine, Dendrobium was used to elevate the kidneys’ health, lungs’ and the stomach. Other that, Dendobrium was also used as a strengthening tonic. In this era of technology, Dendrobium is used to facilitate weight loss. When combined with Caffeine, Dendrobium 600 quickens the process of weight loss. The first time you take Dendrobium it feels different like a strong sensory effect or like ingesting a stimulant. It is knownto enhance moods and energy levels.

Dendrobineis said to regulate blood pressure that is it raises or lowers blood pressure when necessary. B-Phenylethylamine increases energy levels while improving weight loss.Dendroxine increases brain function. This is attributed to increase in N-isopentenyl levels in the brain.Dendramine helps combat toxins attacking the brain, which in turn reduces neurodamage. N,N-Dimethyl-B-Phenylethylamine acts as a stimulant and a neurotransmitter and has a stimulant effect.

These ingredients are by far the most important ingredients in this supplement and greatly contribute to its excellent functions.

Each bottle of the Dendrobium 600 has 60 capsules with a prescription of 1-2 capsules per day. Each capsule contains 600mg of Dendrobium powder. Like all SD Pharmaceutical products, Dendrobium 600 is found in online stores such as Supplement source, Bodybuilding.com, supplementscanada.com, planetenutritionand large online stores such as Amazon. A single bottle of Dendrobium 600 goes for around $39.99. The price is not quite bad considering its features and high rate of effectiveness. It is not clear if the company offers a money back guarantee. However, the company offers free shipping and a discount on products bought worth more than $99.

A bottle of Dendrobium 600 contains 60 capsules. Each capsule has 600mg of dendrobium powder. The recommended dosage is 1-2 capsules 15-20 minutes before a training session or work out. For the best results, it is best accompanied with caffeine.

There are many reviews on this product. All state the good and bad of Dendrobium 600. From the look of things, its advantages greatly outweigh the alleged disadvantages. Dendrobium 600 is said to be the next DMAA and any bodybuilder should try it. The use of dendrobium alkaloids sets it way ahead of many supplements and very few supplements can rival its benefits to the body. 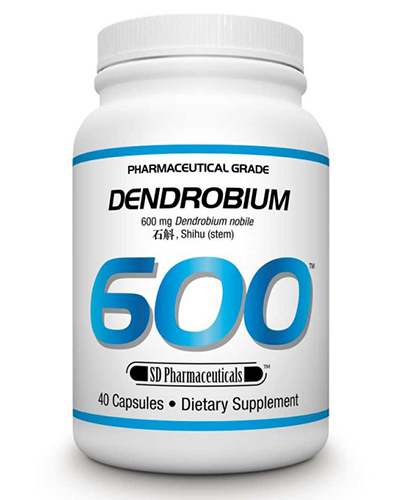 Customers Questions and Answers with Dendrobim 600

clear
Q:
What are the core ingredients in Dendrobim 600?
A:

Dendrobium 600 is a herbal supplement that is geared at sustaining high energy levels, stimulating physical strength and facilitating weight loss. According to customer reviews, Dendrobium 600 works like a charm. SD Pharmaceuticals products are scientifically advanced and very innovative. The pills are most effective when ingested 15-20 minutes before a work out or training session. It also works wonders when used with fat burners to heighten weight loss. Try this supplement and experience the magical experience that others claim to feel each time they take one of these pills before a work out.