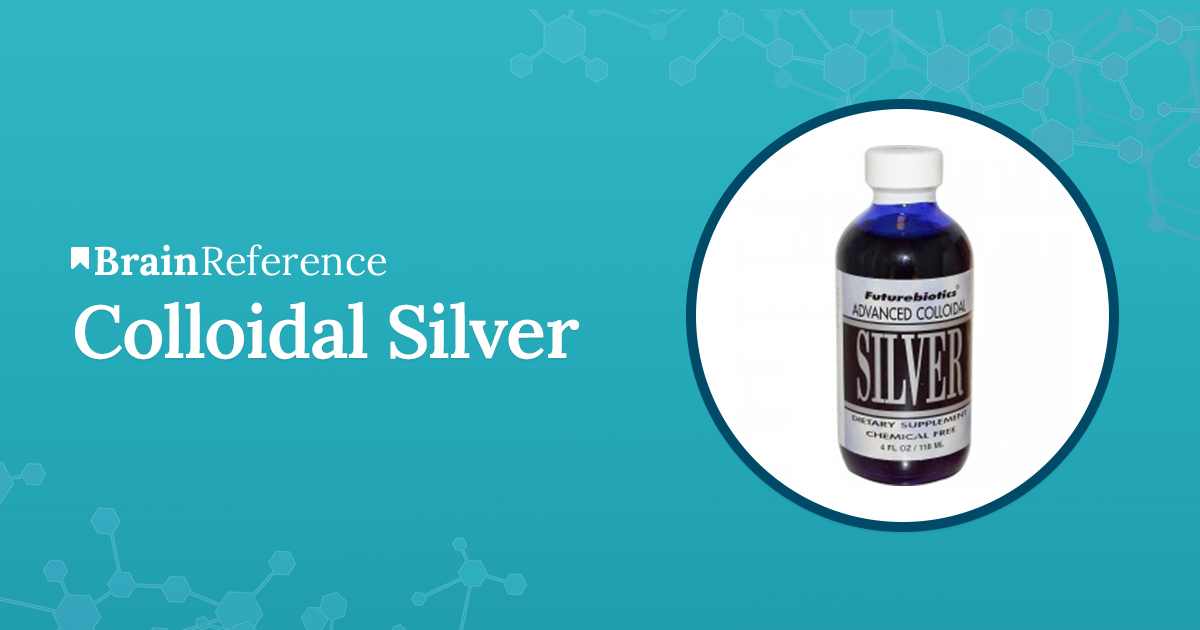 Colloidal silver represents the suspension of some metallic silver particles found in a colloidal base. Basically, it consists of some tiny particles which are suspended in some liquid. This ingredient has been a part of some over-the-counter products throughout the years, and most of them claimed to help with various medical conditions. However, in 1997 the Food and Drug Administration in the United States stated that the majority of these remedies are in fact unsafe and rather ineffective.

On the other hand, this didn’t stop the internet expansion of ads that sell parts of a generator which is capable of producing these particles at home, but, even though people may do it in their own houses, there is no way for them to tell the concentration of strength and purity obtained. Because of this, there are other ingredients used for the same purposes, but which proved to be safer and more efficient.

Furthermore, some reviews based on scientific literature concluded that these particles have no function within the organism and shouldn’t be promoted as an essential mineral because it doesn’t cure any type of disease. Unfortunately, in the majority of cases, it actually proves to be more dangerous than helpful and it is important that individuals who use any type of supplements based on colloidal silver, whether it is in a capsule or liquid form or in lotions are careful with its utilization.

As we’ve previously mentioned, most of the scientific research pointed out that colloidal silver is rather ineffective and unsafe and products featuring it as a component were prohibited in 1999 by the Food and Drug Administration. However, it is still being included in products and, because there are people who purchase it, its claimed benefits are also to be presented.

For instance, one of its most expanded utilization targets treatment for some infections caused by yeast bacteria such as Lyme disease, tuberculosis, pneumonia, gonorrhea, leprosy, scarlet fever, syphilis, cholera, or stomach ulcers. Other infections due to parasites like malaria or ringworm, or some caused by viruses such as herpes, warts, or shingles are also believed to be positively influenced by remedies featuring this ingredient.

In addition, there are some people who think that colloidal silver is good for treating conditions linked to lungs like bronchitis and emphysema as well as some skin conditions like cradle cap, rosacea, impetigo, psoriasis, and eczema. On some rare occasions, this ingredient also concentrates on relieving symptoms determined by some inflammations of the prostate, bladder, nose, stomach, appendix, tonsils, or sinuses. For people who suffer from cancer, lupus, chronic fatigue, diabetes, leukemia, or hay fever it also represents a rather reliable component and it is actually believe to help with these medical conditions. However, none of these claims have been supported by scientific evidence and the most recent studies revealed that there is no connection between the usage of colloidal silver and these bodily issues.

When it comes to its external usage, it is also found in products which can be directly applied to the skin for some issues such as burns, acne, eye infections, throat infections, skin infections, Staphylococcus infections, or fungal infections. If a person decide to use lotions, creams or any other type of products in liquid of creamy form in order to receive help with any of these conditions, they should be aware that the treatment might have no effect whatsoever and stop its usage if so.

Colloidal silver is viewed as likely safe when the usage is internal and done in form of tablets, capsules, or liquid. People should be aware of the fact that the silver contained by colloidal silver may easily deposit in organs like skin, spleen, liver, muscles, brain, and kidney. Because of this, some harmful side effects such as irreversible bluish discoloration of the skin which is first observed in the gums may appear. It also stimulates production of melanin which means that the areas that are later exposed to the sun will go through some increasing discoloration.

When it comes to females that are either pregnant or breast-feeding, this ingredient is regarded as likely safe when the utilization is done internally through oral remedies or injected intravenously. On the other hand, there were some studies which pointed out that enhanced levels of silver are linked to abnormalities in the fetus development, particularly in areas like neck, face and ears. In more difficult cases, this component may lead to some increased accumulations of silver in the organism which further leads to a skin discoloration in children, known as argyria. Additionally, because it can easily be absorbed by vital organs in which it deposits, it may determine some serious damage in certain organs, thus its utilization is better to be done under medical surveillance for women who are prepared to give birth or have recently had a baby, in order to avoid future complications.

Furthermore, colloidal silver may have moderate interactions with some medication among which there are antibiotics, Penicillamine and Levothyroxine, so it’s better to avoid its consumption if a treatment like this is followed alongside.

Colloidal silver is often found in dietary supplements which target a series of medical conditions among which there are infections and inflammations. Unfortunately, scientific research revealed that most of these remedies are not safe or effective and it is better to try a different approach for these types of problems. Additionally, in recent years there have been some commercial which promote some types of generators that can be used to create colloidal silver inside the house. Despite the fact that there are people who buy and utilize them, most of the times they’re not safe because there is no actual way of determining the purity or strength of the composition.

Even though there are a wide array of remedies featuring colloidal silver on the nutritional market, there was an outburst from the Food and Drug Administration in 1999 which prohibited the creation of this type of products because they were believed to be dangerous. Nowadays, most of the dietary supplements only contain colloidal silver as an additional ingredient in small quantities.