Cherry Plum is one of the 38 herbal supplements designed by Dr. Eduard Bach in the beginning of the 1900’s. This formula is designed to help people in deep despair who feel they are about to lose control over their actions. Eduard Bach is a famous doctor who designed these remedies from his desire to restore a balance between the mind and the body which he considered the root cause of all physical and emotional problems.

Bach Remedies correct emotional imbalances and have been designed to work in conjunction with other types of medication without unwanted adverse reactions They are advertised as safe for children, pregnant women, and even plants and pets.

The Cherry plum formula is not only suited for those who fear to lose control and harming themselves, but also for a loss of control that has already happened. The example given for this last situation is a screaming, irrational child who needs to be calmed down.

The formula advertised to restore the feeling of calmness and control in individuals who are on the verge of breaking down. The Cherry Plum negative state is characterized by a deep discomfort in which the personality experiences irrational and powerful fears characterized by an urge to exteriorize through violence on themselves or on others. As opposed, the positive Cherry plum state is installed when a person can objectively evaluate its situation and act with calmness when dealing with that situation. This person is able to take rational action without endangering the safety of anyone around him, including himself.

The Bach remedy is used as a support in psychotherapy and marriage counseling, to treat bed-wetting in children, drug addiction, and even neurological problems such as Parkinson’s disease.

2) What Are Cherry Plum Ingredients?

3) Is Cherry Plum Right for You?

As we have stated above, Dr. Edward Bach is the true mind behind this supplement. According to his statements, “Fear of mind being over-strained, of reason giving away, of doing fearful and dreaded things, not wished and known wrong, yet there comes the thought and the impulse to do them.”

There are very few things known about Cherry Plum. The key ingredient in this formulation is a rather unusual ingredient in brain supplements. It is one of a large family of small flowering trees that includes many of the ornamental blossoms of the spring garden. However, there is very little information regarding its medical purpose.

According to the website, a patient can take this supplement in several ways. However, “taking larger doses at one time doesn’t have a stronger effect; but if you are going through a crisis, you can take more frequent doses to get you through it,” as the manufacturer confirms.

The recommended dose is two drops of Cherry Plum in a small glass of water. The patient can also take it directly under his or her tongue. The product description states that “every bottle comes with its dropper to perfectly measure four drops. It can also be used on the pulse points or moistened lips.”

4) What Cherry Plum Does?

Cherry Plum is a relatively cheap product, and it can be found in many online and offline supplement stores. Some online retailers may offer additional discounts. Please note that Bach USA doesn’t sell the product from their official website, but have an “online shop” from where the supplement can be purchased.

Cherry Plum flower is not a popular remedy. It seems that the Bach remedy is one of the few medicines based on this ingredient at this time. It’s only fair to assume that the number of scientific studies involving this herb is very limited at this time. Our online research did not reveal any studies that would prove the benefits of this extract.

8) Our Final Take On Cherry Plum

Cherry Plum is one of the 38 popular flower essences designed to treat various emotional affections and restore inner balance. The formula is designed for those in advanced stages of terror, fear, anxiety, or nervous tension. The main problem with this formula is that although numerous online web-pages describe the formula’s general purpose, there aren’t many details available about it. For example we were interested to find the exact composition, what the concentration of the active compounds, and what the suggested dosage is. We also couldn’t find how long should a bottle of 0.7 oz. last so we can evaluate if it is an expensive or an accessible product. This (essential in our opinion) information is missing, and we can’t understand why any producer would fail to provide such details when it is clearly that it’s is something potential consumers would want to known prior to making a purchase. 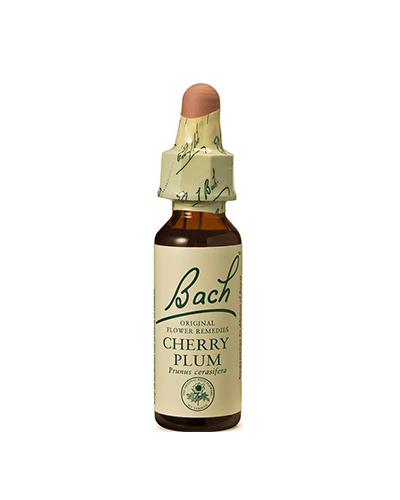 clear
Q:
What are the core ingredients in Cherry Plum?
A:

Q:
Are Cherry Plum benefits actually a reality?
A:

Many individuals who present with mood disorders have posted positive testimonials on this product. However, while Cherry Plum does seem effective in treating mild to moderate symptoms of stress, anxiety and behavior problems, those who experience these symptoms more frequently should consult a mental health professional.

Until I began to use Cherry Plum, I could not resolve the deep issues I have been facing for a long time. I have been using many Bach flower remedies for years, but the ‘rational me’ would always skip this remedy. Until now…
I went through a traumatic incident at age 12, and that set the foundation for impulsive behavior and self-sabotage.
Please consider this remedy if you have faced any PTSD moment, however small.
It really helps!

I have been using Bach flower remedies for a while now, but have had only a few successes. This, I think, is mostly due to the fact that it can take some time to find the right remedy for the situation. Sometimes the symptoms of a situation may seem to call for a certain remedy, but the cause of the symptoms are what should be treated by another remedy that may not seem obvious at the time. I feel that this is why many people try flower remedies and dismiss them when they don’t work. There are 38 remedies and it can be expensive to try all of them to see which one fits!

I’m glad to say, I’ve found Cherry Plum to be the perfect remedy for me at this time. It didn’t stand out to me, because I don’t ‘fear losing my mind’, however I was having a lot of emotional issues at the time and tried several remedies to address what I thought was causing that. In the end, turns out that Cherry Plum is an excellent flower remedy for times when you just feel that your emotions are out of control – I was hypersensitive, plagued by unwanted thoughts that led me to anxiety and depression, felt like an emotional rollercoaster. I have only been consistently taking Cherry Plum for two days now (although I have taken it in the past with notable success) and the difference is live night and day. I feel rational and composed, my emotions are under control.

I definitely recommend it!

I started using cherry plum to help ease symptoms of PMS. I suffer from extreme mood swings, anxiety and I become somewhat psychotic the week before my period. I behave irrationally and can’t seem to control my anger and irritability. I snap at the smallest things. Cherry plum has helped me find a balance as I feel calmer and more in control of my mind and actions. Symptoms such as irriatability and anger has lessened as well. I wish I had found this remedy sooner and would recommend it to anyone with PMS type 1.

Bach remedies are extremely effective for acute or chronic conditions and if you want to find testimonial go on to the Bach website. I used Cherry Plum for 3 months for chronic anxiety over 20 years ago with major results.