GABA is a dietary supplement marketed to help reduce stress, promote restful sleep and increase lean body mass.The formula is manufactured by Ultimate Nutrition, a U.S. based company founded in 1979 by Victor H. Rubino, one of the most popular amateur power lifters at that time. The company develops and markets various sports and athletic performance dietary supplements, including pre and post workout amino-acids, protein powders, carbohydrate powders, and various types of fat burners

The formula is recommended to people having trouble sleeping and people who seek to achieve a general state of wellbeing. A special category of consumers targeted by GABA includes body builders, power-lifters, martial artists, runners, and other athletes of all shades.

GABA is based on the amino acid Gamma Amino Butyric Acid or GABA. GABA is a primary inhibitor neurotransmitter in the brain, where it works to prevent the over-firing of nerve cells and hence promotes relaxation. Due to its calming effect, GABA is mostly used to treat conditions that affect mood such as bipolar disorder (as low levels of GABA have been observed in patients suffering from this condition) or depression. Several studies have indicated GABA may help relieve symptoms of anxiety disorders such as panic attacks or OCD (obsessive compulsive disorder).

Other medical benefits include ADHD, Premenstrual Syndrome (PMS), epilepsy, hypertension and blood pressure. However, GABA supplements are not as effective as natural GABA, since they cannot cross the blood brain barrier. GABA is also known to increase production of the Human Growth Hormone, known to influence muscle mass growth. This is why GABA is popular with weight lifters and sports enthusiasts. Further research is needed to prove its benefits, as no conclusive clinical evidence is yet available.

GABA is generally considered side effects free, but may sometimes cause drowsiness. Although there are no known interactions with other drugs, a healthcare provider’s advice is generally recommended in case of GABA supplements.

2) Details on GABA Ingredients and Uses

Based on the amino-acid Gamma Amino Butyric Acid, GABA focuses on preventing the over-firing of nervous cells, thus promoting relaxation. GABA represents a primary inhibitory neurotransmitter found in the brain. Also, its calming effects have proved reliable in treating conditions which affect bipolar disorder (patients suffering from this disorders possess low GABA levels), depression and mood control. Moreover, some studies showed that GABA might have a positive effect in relieving symptoms of anxiety disorders like obsessive-compulsive disorders (OCD) or panic attacks.

Besides the previously mentioned disorders, GABA may also prove reliable in treating Premenstrual Syndrome, hypertension, ADHD, epilepsy, and blood pressure. Unfortunately, GABA supplementation is not as effective as natural GABA because it cannot cross the BBB (blood brain barrier). Research revealed that GABA has a role in increasing production of HGH (human growth hormone) that influences mass muscle development. Therefore, GABA is a very popular ingredient among sports enthusiasts as well as weight lifters. However, further research is required mainly due to the lack of clinical evidence.

Although it is regarded as safe, GABA usage may sometimes cause drowsiness. The manufacturers claim that there are no interactions with prescribed medication. There are online customer testimonials about GABA. What is being reported includes the following:

5) What You Need to Know Before Taking GABA

GABA is an averagely-priced product that can be found for purchase on online retailers or the approximately 45 days of treatment if the label dosages are properly followed. Customers may even take advantage manufacturer website. It is sold by bottles that contain 90 capsules which are sufficient for of discounts and promotions if they buy more than three bottles at once. Unfortunately, international shipment may prove expensive. The countries that offer this product the fastest are Australia and United States of America. The official website has a telephone number that can be called by unsatisfied customers or people who desire to learn more about this supplement before purchasing it.

The suggested dose of GABA is 2 capsules a day. No side effects or other warnings are issued by the manufacturer. Consumers generally report being satisfied with the formula.

GABA is one of the key inhibitory neurotransmitters in the brain, with numerous functions on the nervous system, behavior and mood. GABA is advertised to help relief symptoms harmful effects of daily stress, anxiety, depression or trouble sleeping. Consumer reviews report a good value for money and claim the formula is effective in delivering its marketed benefits. However, GABA research is still inconclusive in many areas, as large scale clinical trials on humans are required to prove most of its medicinal claims.

Although side effects are rarely reported for GABA, this is a dietary supplement which is not regulated by the FDA. This is why we recommend you consult a healthcare professional before beginning treatment, as we do with all dietary supplements. 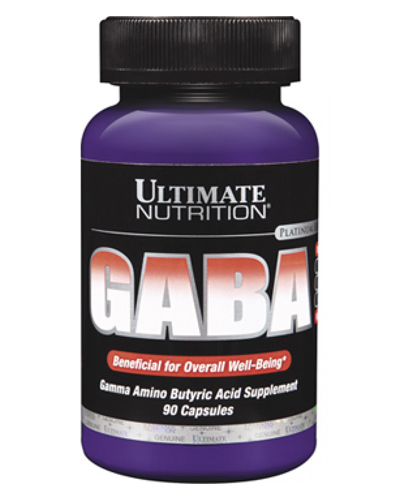 clear
Q:
What are the GABA ingredients?
A:

GABA represents a dietary supplement that has been designed to promote restful sleep, increase lean body mass and help reduce stress. This specific combination has been marketed by Ultimate Nutrition, an American company founded by Victor H. Rubino in the 80s. The business has been recognized for its development of athletic performance and sport supplements that include: protein powders, workout amino-acids and carbohydrates powders. The remedy is recommended mainly for people with sleeping troubles.

Because GABA is a key inhibitory neurotransmitter of the brain, it has a large variety of functions when it comes to the nervous system, mood and behavior. Therefore, GABA is promoted as a product that helps relief symptoms related to daily stress, sleeping troubles or anxiety. Client testimonials also reveal an increased efficacy of the formula and show that it delivers its marketed promises. On the other hand, further research is required to obtain a general opinion about GABA at other health levels, most of them including more serious issues. Even though side effects haven't been reported in GABA treatment, this specific supplement hasn't been FDA approved.

Even though I’m a female and I don’t want to gain body mass, I’ve tried this supplement because I had some troubles sleeping. I’m not saying it cured them all, but it definitely helped.